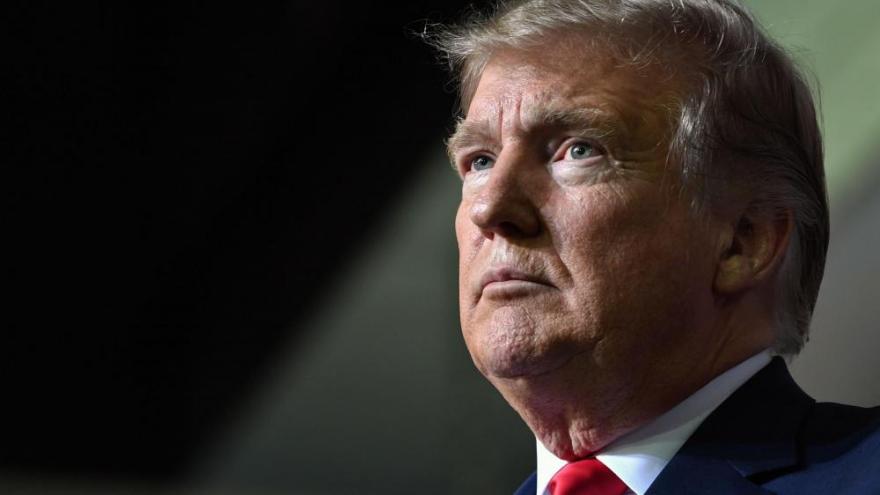 US President Donald Trump speaks during a rally in El Paso, Texas on February 11, 2019.

One point of friction with his previous team was Trump wanted the attorneys to focus on his election fraud claims rather than the constitutionality of convicting a former president.

Trump has struggled to find lawyers willing to take his case as he refuses to budge from his false claims. Trump's advisers have been talking to him about his legal strategy and he keeps bringing up election fraud for his defense, while they have repeatedly tried to steer him away from that, according to a source familiar with those discussions.

It's unclear whether Schoen and Castor will go along with what Trump wants.

"Schoen has already been working with the 45th President and other advisors to prepare for the upcoming trial, and both Schoen and Castor agree that this impeachment is unconstitutional - a fact 45 Senators voted in agreement with last week," the release said.

"It is an honor to represent the 45th President, Donald J. Trump, and the United States Constitution," Schoen said in a statement.

Castor added, "I consider it a privilege to represent the 45th President. The strength of our Constitution is about to be tested like never before in our history. It is strong and resilient. A document written for the ages, and it will triumph over partisanship yet again, and always."

Schoen "focuses primarily on the litigation of complex civil and criminal cases before trial and appellate courts," according to his website. He serves as chair of the American Bar Association's Criminal Justice Subcommittee of the Civil Rights Litigation Committee.

Schoen was on the team of lawyers representing Roger Stone in the appeal of his conviction related to issues the former Trump adviser took with the jury. He dropped that appeal after then-President Trump commuted Stone's prison sentence, but before Stone received a full presidential pardon for lying to Congress to protect Trump.

Schoen has also publicly discussed, with outlets including The Atlanta Journal-Constitution, that he met with accused sex trafficker Jeffrey Epstein in prison days before he died by suicide and that he didn't believe Epstein killed himself.

"I saw him a few days earlier," Schoen once told Fox News. "The reason I say I don't believe it was suicide is for my interaction with him that day. The purpose of asking me to come there that day and over the past previous couple of weeks was to ask me to take over his defense."

Castor, meanwhile, is a well-known attorney in Pennsylvania who previously served as Montgomery County district attorney.

While in that position in 2005, Castor declined to prosecute Bill Cosby after a woman reported the actor had touched her inappropriately at his home in Montgomery County, according to a news release from his office at the time.

Cosby was later tried and convicted in 2018 for drugging and sexually assaulting a woman at his home in 2004.

In order to convict Trump, at least 17 Republicans will need to vote with all Democrats when the trial begins.

CNN previously reported that Senate Republicans who criticized Trump without doing anything about his actions are hoping to put distance between themselves and the former President without casting any votes that could cause a backlash from Trump and his fervent supporters.

Many say something should be done about what Trump did -- but just not by them.

The rhetoric showcases the split between House and Senate Republicans as the party struggles to find its voice after the tumultuous Trump era. Many House Republicans remain staunch Trump defenders, saying he did nothing wrong and shouldn't be blamed for the violence that occurred at the Capitol on January 6.