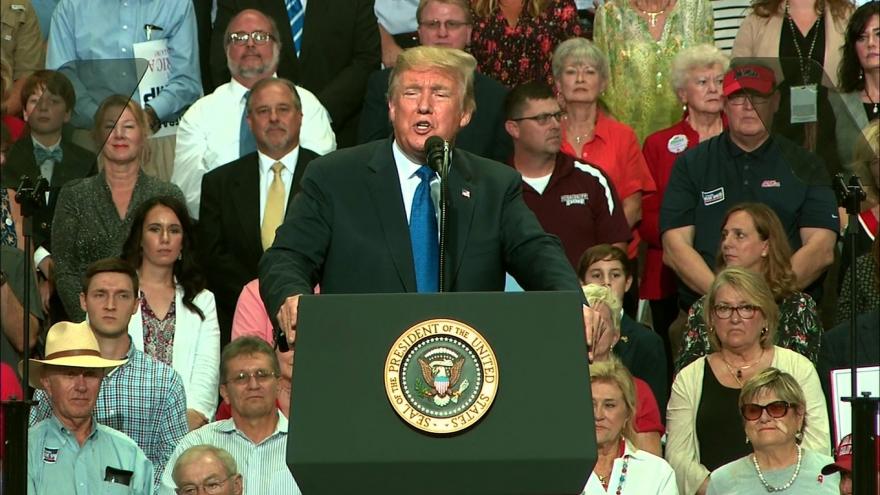 SOUTHAVEN, Miss. (AP) — President Donald Trump ignited a crowd at a campaign rally in Mississippi by mocking a woman who has claimed she was sexually assaulted by Supreme Court nominee Brett Kavanaugh decades ago.

The audience laughed as Trump ran through a list of what he described as holes in Christine Blasey Ford's testimony before the Senate Judiciary Committee. She testified that Kavanaugh pinned her on a bed, tried to take off her clothes and covered her mouth in the early 1980s, when the two were teenagers. Kavanaugh has denied Ford's allegations.

Imitating Ford, he added, "But I had one beer — that's the only thing I remember."

It marked the sharpest criticism by Trump of Ford since she came forward publicly with the allegation last month. He had previously called Ford a "very credible witness."

"Is it any wonder that she was terrified to come forward, and that other sexual assault survivors are as well?" Bromwich tweeted. "She is a remarkable profile in courage. He is a profile in cowardice."

Arizona Republican Sen. Jeff Flake said Wednesday on NBC' "Today" that mocking "something this sensitive at a political rally is just not right."

"I wish he hadn't done it," Flake said. "It's kind of appalling." Flake is a key GOP vote in the confirmation battle, and while he said last week he would vote to confirm Kavanaugh, he also called for an expanded FBI investigation that resulted in a one-week delay. Flake has not said how he will vote if the nomination comes up this week.

The president was in Mississippi on Tuesday looking to use his influence to sway the outcome of a low-profile election that could tip the balance of the Senate.

As Republicans fight headwinds ahead of the Nov. 6 midterm election, Trump sought to rally his supporters behind GOP Sen. Cindy Hyde-Smith, who was appointed to fill the seat of Republican Thad Cochran, who retired in April. She faces three candidates — Republican Chris McDaniel and Democrats Mike Espy and Tobey Bernard Bartee — in next month's special election for the remainder of the two-year term.

But Trump spent much of the rally lamenting the treatment of Kavanaugh by Democrats, whose attacks, he said, had taken their toll on the judge's family.

"A man's life is in tatters," he said. Of Democrats, he added, "These are really evil people."

He even raised questions about the drinking habits of Vermont Sen. Patrick Leahy in an attempt to turn the tables on Democrats who have gone after Kavanaugh's beer drinking. Trump told the crowd they should do an online search for "Patrick Leahy slash drink." Leahy's office didn't immediately return a message seeking comment Tuesday.

Some Republicans and White House allies have suggested the allegations against Kavanaugh can be potent political fodder in the run-up to Nov. 6, animating GOP voters who have so far lacked the same motivation to head to the polls as their Democratic counterparts.

Republican officials and the White House expect Hyde-Smith's race to go to a runoff under the state's jungle election rules that force a showdown between the top two finishers if no candidate wins at least 50 percent of the vote on Election Day. With Republicans defending majorities in the House and Senate next month, officials cast Trump's visit as an attempt to get ahead of a potentially perilous situation.

Officials said Trump is seeking to boost Hyde-Smith as close as possible to the 50 percent threshold and lend momentum for a possible runoff. Depending on how Republicans perform on Nov. 6, the eyes of the nation could fall on a Nov. 27 Mississippi runoff in what could become an expensive and high-profile race to determine control of the Senate.

"Your vote in this election will decide which party controls the United States Senate," Trump said.

A vocal minority of the crowd Tuesday backed the other conservative in the race, McDaniel, a state senator, and booed Hyde-Smith when Trump introduced her. They launched into occasional chants of "We want Chris."

Earlier Tuesday, Trump told electrical contractors gathered in Philadelphia that his economic policies would translate into more jobs for their ranks as he highlighted a new trade deal among the U.S., Mexico and Canada.

"We're in the midst of a manufacturing renaissance — something which nobody thought you'd hear," Trump said in a speech to the National Electrical Contractors Association Convention a day after celebrating the new North American trade deal.

In fact, North America already is a manufacturing powerhouse. The United States ranks No. 2 in the world behind China in manufacturing output. Mexico ranks 11th and Canada 13th, according to United Nations numbers pulled together by the Brookings Institution.

Trump calls the new trade agreement USMCA, for U.S.-Mexico-Canada Agreement. "Like YMCA or U.S. Marine Corps with an A at the end," he explained.

He said he doesn't want to use the previous name, NAFTA, the North American Free Trade Agreement, which he contends cost American jobs and railed against during his 2016 presidential campaign. The new trade deal still must be approved by Congress.

"We are finally rebuilding our country, and we are doing it with American aluminum, American steel and with our great electrical contractors," he said.

Before departing the White House, Trump tweeted, "THE ONLY REASON TO VOTE FOR A DEMOCRAT IS IF YOU'RE TIRED OF WINNING!"