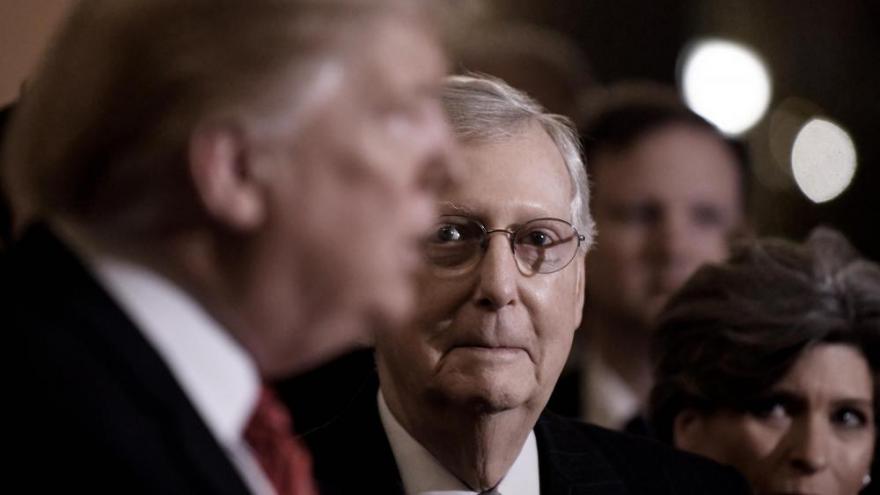 US President Donald Trump (L) talks to the press as Senate Majority Leader Mitch McConnell (R-KY) looks on after the Republican luncheon at the U.S. Capitol Building on January 9, 2019 in Washington, DC.

(CNN) -- President Donald Trump may be defeated, but Trumpism -- the political coalition the President built, the allegiance he demanded from his allies and the policies he heralded -- will be with Republicans for years to come.

"There is no abandoning Trump and his imprint on the party. There are ways to adapt it and make our message more tenable to folks. But I don't think it is realistic to pretend he wasn't President for four years," one GOP House aide told CNN.

Hours after Joe Biden was projected the winner, some Republicans in leadership were still not publicly acknowledging Trump's loss. Speaking to Fox News Saturday night, House Minority Whip Steve Scalise pushed back when the anchor referred to Biden as the president-elect.

"Look, there is a lot of game left to be played," the Louisiana Republican said.

As his path to 270 electoral votes was narrowing, Republican lawmakers struggled to disentangle themselves from the President's cries that the election was rigged against him. Some Republicans rejected Trump's claims and vowed to ensure that all legal ballots be counted. But others -- even some who had once decried Trump's antics -- followed the President despite no supporting evidence.

"The election results are out of control. It's like the whistle has blown, the game is over, and the players have gone home, but the referees are suddenly adding touchdowns to the other team's side of the scoreboard," tweeted Tommy Tuberville, who won a US Senate seat in Alabama on Tuesday.

Trump's narrow loss makes it harder for Republicans to completely walk away from a President whose unpredictability tormented them at times but whose loyal following boosted them in races across the country this week.

"I think what Trump's primary message was, the forgotten men and women, America first, in coal country or manufacturing, that is something that every elected official ought to take a look at," Sen. Ron Johnson, a Republican from Wisconsin, told CNN. "He ran and said this is who I am. He is the same person today as he was when he came down that escalator," in making his announcement in June 2015 that he would run for president.

Trump's popularity may not have saved him in the end, but it did deliver wins for Republicans across the country. Democrats won a razor-thin presidential contest, but Republicans managed to win back a handful of seats in the House, and looked poised to maintain the Senate and make some inroads with minority communities that could make it much harder for the GOP moderates and Trump critics to dismiss the President's message, strategy and legacy outright. Instead of abandoning Trump's unorthodox policies on trade, tough line on immigration or direct focus on working-class voters, Republicans are already grappling with the reality that Trump has forever changed the party.

A Republican-led Senate and Democratic White House would provide Republicans an opportunity to work with Biden. But it also would give them a stopgap, a firewall and a way to dramatically contrast themselves with the Democrats' agenda. Leadership jockeying on Capitol Hill will consume the lame duck session, but Republicans will also have to decide how to confront Biden's presidency -- whether to embrace areas of bipartisanship or firmly hold the line against Biden implementing his vision for the country.

Left in Trump's wake are a handful of governors, congressional leaders and GOP senators who will spend the next weeks and months dissecting where the party and, depending on their aspirations, they themselves go next.

For Sen. Marco Rubio, a Republican from Florida who ran against Trump in the primary in 2016, the lessons of 2020 came early as he watched returns pouring in from his home in Miami-Dade County. A son of Cuban immigrants who once saw comprehensive immigration revisions as the path to expanding the GOP's reach, he watched as President-elect Biden significantly underperformed where Hillary Clinton had been just four years ago. Clinton had beat Trump by roughly 30 points in the heavily Latino county in 2016. In 2020, Biden was on a path to win by just 7 points. Trump, a President whose language about immigrants, obsession with a border wall and policies had been seen by pundits as setting the GOP back with Latino voters for decades, made inroads -- at least in some places. Two Democratic congresswomen in South Florida -- Donna Shalala and Debbie Muscarsel-Powell -- were also defeated by Republicans.

"We have spent many years in this country thinking ethnicity is the leading political identity of many Americans, and what we are learning is that their status as working-class Americas becomes their identity. That doesn't mean the other issues are irrelevant, but they go side by side," Rubio said.

If Republicans are to win the White House again, Rubio argues, the party should build on what Trump created with a multi-ethnic coalition and a focus on the economy that can appeal to the working class. Rubio says Republicans should also try to win back some of the suburban voters "who may be repelled by some of the harder edges of the messaging."

"That hunger and thirst for political leaders who focus on those issues is not going to change," Rubio said. "The question is whether someone not named Donald Trump is able to do what he has done."

Pushed on if he would run in 2024 for president, Rubio demurred: "I think I have learned over the years that sometimes you cannot decide whether you want to cross a bridge until you know how many bridges there are as your options. Obviously I have run for president before. I wouldn't rule it out in the future."

For some Republicans who have watched as the party has been overtaken by Trump over the last several years, Trump's loss comes with an opportunity -- a chance to turn the page and return to expanding the coalition of voters Republicans can get in an election.

"Dust off the old autopsy," former Sen. Jeff Flake of Arizona, a Republican who retired from the Senate during Trump's presidency, told CNN in a extensive interview, referring to the Republican National Committee's 2013 report on what went wrong in the 2012 election and how to appeal to a broader swath of voters, especially minorities and women. "Anger and resentment are not a governing philosophy. Globalism is here to stay and we have to deal with it."

But even Flake acknowledges that Republicans have months and years of soul searching ahead.

"There is going to be a big segment that does think President Trump had the right message and he was flawed. You will have some like Tom Cotton and Ted Cruz try to pick up that mantle," Flake said, referring to senators from Arkansas and Texas. "But I just hope that Republicans as a whole realize that Trump is a dead end. There is no there there. You can only own the libs and get a certain percentage of the voters."

Some conservatives on Capitol Hill disagree.

"I am not that nuts about the tweets because you are always asking me to defend them, and I don't want to, but we needed someone like him because what most conservatives do share is a revulsion to the deep state, the swamp, and if anything resonated with people it was his message of draining the swamp," Johnson said.

For Republicans, the immediate work of defining their party without the Twitter-obsessed, plain-speaking commander in chief will be carried out by their congressional leaders.

Majority Leader Mitch McConnell retained his Senate seat handily Tuesday night in Kentucky and is widely expected to remain at the helm of the GOP conference in the US Senate. In his acceptance speech, McConnell didn't mention Trump specifically, but did forecast the importance of the working-class vote to Republicans.

"I look out for middle America," McConnell noted.

"President Trump had a very strong night last night. His vision for our country expanded our party," McCarthy touted. "His efforts in reaching out to every demographic has positively changed the future of the GOP."

Exactly what that future looks like, however, remains to be seen.