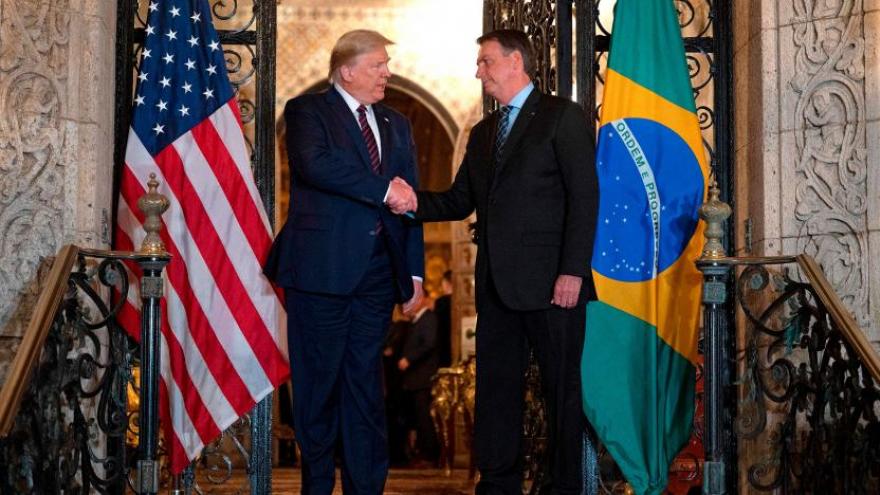 US President Donald Trump returns Friday to his Palm Beach club for the first time since his last visit to Mar-a-Lago in March. This image shows Trump shaking hands with Brazilian President Jair Bolsonaro during a diner at Mar-a-Lago in Palm Beach, Florida, on March 7, 2020.

(CNN) -- In Mar-a-Lago's disco-lit main ballroom, he watched as a large crowd serenaded his son's girlfriend while sparklers flared. On the stone dining patio, he hosted the Brazilian President for talks as diners sat at tables nearby, crammed together like normal. Eager to appear like everything was fine, he shook hands and spoke at close range with members and guests, which that weekend included a roster of congressmen, Fox News personalities and family members.

President Donald Trump's last visit to Mar-a-Lago in March was a final gasp of "before times," both an embodiment of the pre-Covid era and an illustration of how the President was spending his days as the virus was beginning its rampage across the country.

Trump returns Friday to his Palm Beach club for the first time since, badly damaged politically because of his handling of the virus and eager for the days when the patio hummed with activity, the ballroom was packed with paying parties and the prime rib buffet was steaming.

He'll find the place has changed. The Beach Club, tennis courts, gym and spa all reopened earlier this month, though dining in the main house -- where Trump has his private quarters -- isn't scheduled to restart until the start of November, according to a letter members received last month.

Seven months ago, Trump's four-day-long weekend at Mar-a-Lago encapsulated the lost days when health experts say more could have been done to prevent early spread of the disease. Even though he'd privately been telling people the pandemic was serious -- including the journalist Bob Woodward -- in public Trump was downplaying it.

"So last year 37,000 Americans died from the common Flu. It averages between 27,000 and 70,000 per year. Nothing is shut down, life & the economy go on. At this moment there are 546 confirmed cases of CoronaVirus, with 22 deaths. Think about that!" he tweeted from Florida on March 9.

As Trump returns to his club, the rampant virus has not waned. The 546 cases he cited in his tweet have multiplied to nearly 8.5 million; the 22 deaths to more than 220,000.

Trump, meanwhile, continues to downplay the severity of the crisis, and he said during his final presidential debate on Thursday that the country was almost out of the woods.

Trump last arrived to his club on March 6 after touring a laboratory at the Centers for Disease Control and Prevention in Atlanta, where he made false claims about the availability of tests and boasted about his own acumen in understanding the disease.

"Every one of these doctors said, 'How do you know so much about this?' Maybe I have a natural ability," Trump, wearing a red Keep America Great hat, said inside the agency, which since then has become a hotbed of discontent as the President undermines its scientists and health recommendations.

By the time he made it to Palm Beach, the party atmosphere was in full swing -- though at least one person at the resort that weekend, Fox News host Tucker Carlson, was there to convey his concerns that the President wasn't taking the pandemic seriously enough.

"People you trust, people you probably voted for, have spent weeks minimizing what is clearly a very serious problem," Carlson would warn his viewers a few days later.

Trump, hosting his Brazilian counterpart Jair Bolsonaro, did not appear to internalize the message.

"We're doing very well and we've done a fantastic job," Trump said, standing in front of Mar-a-Lago's wrought-iron front doors. Asked whether he was concerned the virus could reach the White House -- which it did a few months later -- Trump voiced nonchalance: "I'm not concerned at all."

Moving from his patio meetings with the Brazilians into a packed ballroom for Kimberly Guilfoyle's birthday, Trump demonstrated little concern that guests at his club might be carrying the virus. The marble-and-gold room was jammed with revelers from the wider Republican orbit -- including Ivanka Trump and Jared Kushner, who each delivered toasts.

"Four more years!" shouted Guilfoyle, decked out in gold sequins, as the President stood nearby.

Several people who were at the club that weekend tested positive for coronavirus, including members of the Brazilian delegation and attendees at Guilfoyle's 50th birthday party. Others placed themselves in protective quarantine. A note was sent to donors who had attended a fundraiser that a fellow attendee had received positive test results. Out of an abundance of caution, a dog fashion show scheduled for the next week was postponed.

It would only be a matter of days before Trump, adopting a short-lived seriousness about the virus, formally unveiled the government's "30 Days to Slow the Spread," which was eventually extended to 60 days. Businesses across Florida and the country were shuttered. Mar-a-Lago itself, forced to close ahead of schedule, furloughed more than 100 workers as the pandemic began to rage across the country.

"You can't have many hundreds of employees standing around doing nothing," Trump said of the decision to let go workers at his resort. "There's no customer. You're not allowed to have a customer."

The President's handling of the virus has earned him wide disapproval and has imperiled his political prospects. In the months since he was last at his Palm Beach club, Trump, Bolsonaro and Guilfoyle have all contracted the virus, along with large numbers of Trump's aides.

Now Trump is pushing for businesses to reopen, insisting further lockdowns aren't necessary and only cause more harm.

"We're learning to live with it," Trump said at Thursday's debate. "We have no choice."

Mar-a-Lago did reopen its outdoor facilities in May with enforced social distancing guidelines for members visiting the Beach Club. Loungers and tables were spaced 6 feet apart and guests were told to keep their distance from one another "on the pool deck and in the pool/jacuzzi."

The members-only club also conducted a heightened cleaning regimen. Restrooms were to be "thoroughly sanitized hourly" and the club was to have "sanitizing stations" spread around the pool deck. The club closed for the season at the end of June and members were told that certain renovations had been made over the summer.

When it opens for dining in November, spots on the patio will be harder to come by. Members were told that occupancy will be limited for dinner. And though the annual New Year's Eve party is still on -- "We can expect an even more exciting gala this year," the letter to members read -- members were told to reserve early to ensure they can secure one of the more-limited tickets.

In the nearer term, the club is planning an annual Halloween masquerade ball and an election night viewing party. And earlier this week, Donald Trump Jr. and Guilfoyle hosted a lunch fundraiser in the main ballroom, where many guests weren't wearing masks.