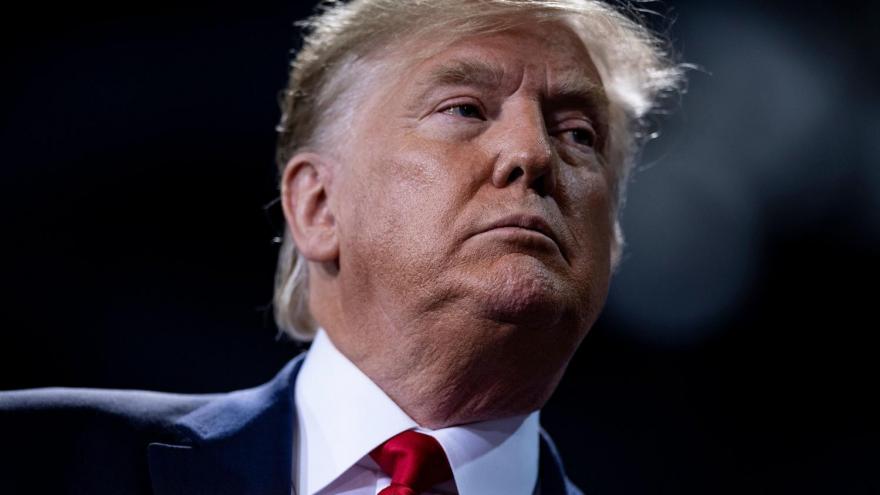 The President wants Americans to think impeachment doesn't matter -- even though it will forever stain the name of Donald John Trump.

(CNN) -- Now that he's been impeached, President Donald Trump's reputation rests with three juries: in the Senate, among 2020 voters and generations of Americans not yet born. He has control over the first, untested influence over the second and almost no ability to shape the third.

In the immediate aftermath of acquiring a historic stain with which only two previous Presidents have had to live, Trump did what he always does by going on the attack, leveraging his humiliation as a rallying point in his 2020 campaign.

"It doesn't really feel like we're being impeached," he said during a rally in the aptly named Michigan city of Battle Creek -- almost certainly hiding his true feelings for the benefit of rowdy supporters.

"The House Democrats are surrendering the majority, their dignity," Trump said. "They look like a bunch of fools."

Trump romped through the rally -- his longest ever at two hours and one minute -- displaying exactly the kind of unchained behavior that led him to impeachment.

At one point, he crassly implied that venerated Michigan Rep. John Dingell, who died this year, was "looking up" from hell at his antics. Dingell's widow Debbie, who now serves in his seat, tweeted that Trump had "brought me down in a way you can never imagine."

Trump at least has the luxury of knowing that the Republican-led Senate won't vote to remove him in a trial expected to begin early next year.

McConnell, a master of stifling political momentum in the Senate, promised in his laconic way that the emotion stirred by Wednesday night's dramatic impeachment vote would soon drain away in the Senate.

He noted that the same founders who provided for impeachment "built the Senate to provide stability ... To keep partisan passions from boiling over."

Senators, in a trial expected to begin early next year, will judge the case sent by the House and, barring a political earthquake, the President will easily escape conviction.

Many Republicans, who hold the Senate majority, have already seized a chance to pledge loyalty to Trump. Democrats will use the trial next month to jam vulnerable swing state GOPers and accuse them of bailing out a historically corrupt President.

McConnell is expected to speak about impeachment later Thursday morning and will slam "the most rushed, least thorough, and most unfair impeachment inquiry in modern history," according to excerpts of his remarks obtained by CNN from a GOP aide.

A confrontation between Republican and Democratic leaders over the terms for the trial reflect both the need of both parties to forge a political advantage despite a lack of suspense about the trial's outcome.

House Speaker Nancy Pelosi warned moments after the House acted that she was not yet ready to send the articles of impeachment over to the Senate so that a trial can begin.

Some liberals have urged her to hold them until McConnell agrees to the terms for a Senate trial along with Democratic demands for witnesses including White House acting chief of staff Mick Mulvaney and former national security adviser John Bolton.

"We'll see what happens over there," Pelosi said, while not ruling out holding the articles of impeachment for weeks.

All eyes will now be on a possible meeting between McConnell and Senate Minority Leader Chuck Schumer on arrangements for a trial that Trump badly wants -- in his mind at least -- to absolve him.

The pain of impeachment

However his economy roars, no matter how long his conservative Supreme Court majority endures, the impeached 45th President's legacy will now be inseparable from a scheme to use constitutional authority to coerce a foreign nation, Ukraine to rough up his potential political foe -- Joe Biden.

Whatever happens over the next one or five years, Trump's name will dwell in infamy alongside Andrew Johnson and Bill Clinton as the only commanders-in-chief to be impeached.

The pain of such a fate should not be underestimated. All presidents ponder their place in history. For someone like Trump -- for whom branding is religion and who emblazoned his name on skyscrapers, hotels airliners, golf clubs and casinos all over the world -- it must especially sting.

In a charmed but controversial life, Trump has rarely faced consequences for his rule breaking and defiance of restraints. Until Wednesday.

The fact he kept returning to the subject of impeachment during his rally -- and his days of volatile tweets suggests that the President cares far more about impeachment than he is willing to let on.

The politics of impeachment are so unpredictable and the historical analogies are so limited that no one can really say what will happen next.

Unlike Clinton who was term limited and Johnson who lost the Democratic nomination after he was impeached, Trump will have a chance to redeem himself, at least politically. A victory in 2020 would rebuke Democrats and restore tarnished legitimacy. His push for a second term now becomes a quest for redemption. The dwindling Democratic field will face-off in Los Angeles for their final debate of the year on Thursday.

Trump immediately set about harnessing a powerful new motivating emotion for his election campaign -- vengeance. Few politicians are as adept at exploiting a sense of personal persecution as Trump. His impeachment will glue him even closer to a base seething with heartland antipathy towards Washington. And added to the strong economy, low jobless rate, his overheated claim to have negotiated historic trade deals and his appointment of conservative judges, a campaign rooted in a backlash to impeachment could be politically potent.

But the President's sense of having endured an epochal personal slight could lead him into dangerous territory. In his report special counsel Robert Mueller noted how that Trump viewed the Russia investigation as an attack on the legitimacy of his 2016 victory. Such anger drove him to extreme lengths. Trump's notorious call with Ukrainian President Volodymyr Zelensky that ignited the scandal that would lead to impeachment happened only days after Mueller testified to Congress. So recent history would suggest Trump's reaction to what happened Wednesday could be swift and extreme.

The President left no doubt in his wild letter to Pelosi on Tuesday that he believes his power is all but limitless and that he should be sole judge of appropriate presidential action. That's a recipe for new clashes with Congress and possible unconstitutional behavior.

Democrats say they had no choice

There is a reason why Pelosi held off on impeachment for so long. Democrats don't know if they will pay a price in tight districts in a political era when voters deliver big mandates -- as at the midterm elections last year -- and snatch them back.

But Democrats also believe that voters handed them the House majority to check Trump. If impeachment electrifies the President's base, there may be a parallel uprising from progressive voters in 2020.

And they were pushed into a box by what appeared to be a clear abuse of power by a President who boasts there are no limits on his authority.

"If we do not act now, we would be derelict in our duty," said Pelosi, who dressed in mourning black on Wednesday and now adds the unwanted distinction of impeaching a President to her groundbreaking resume.

"It is tragic that the President's reckless actions make impeachment necessary. He gave us no choice."

Given the sheer unpredictability over politics in the Trump era, it's also possible that all the calculations over impeachment may soon fade. Maybe Wednesday's drama won't actually matter that much in 2020 -- other than to shape a broader picture of Trump himself for those who love him and hate him in equal measure.

The jury of the future

The Trump impeachment will also haunt Washington for years to come. It enshrined a moment when tribalism has become the defining characteristic of American politics. The unanimous Republican vote in the House to defend the President underscored Trump's utter transformation of the one-time globalist, country club party in his own populist, nationalist image.

More than that it reflected an era when the people can select their own version of the facts. In rapid fire speeches from the House floor on Wednesday, many Republicans ignored the pile of evidence implicating Trump -- and accused Democrats of impeaching him because they hated him and couldn't beat him in 2020.

This impeachment will be remembered for a President who showed zero contrition for dragging the nation through an agonizing political moment and no sign of wrongdoing. Indeed, his personal attorney Rudy Giuliani was continuing to dig for dirt on Biden even as Democrats drew up articles of impeachment. And the President deliberately deployed a strategy of swamping misinformation -- to flood the zone and confuse Americans of the true facts.

This impeachment may also change the office of the presidency itself. If the Senate acquits Trump it will send a message to US friends and foes -- at least while he remains in the Oval Office -- that US foreign policy may be up for the highest bidder.

That's because Trump, according to testimony by officials in his own administration withheld nearly $400 million in military aid in a bid to force Ukraine to deliver a political favor.

The House has also laid down a marker.

By charging Trump with obstructing Congress it has signaled to a future president that a blanket refusal to provide witnesses and evidence as Trump did under a claim of absolute immunity can be considered an impeachable offense.

But Democratic leaders also opened themselves up to criticism. By declining to test Trump's claims in court to the full extent of the law they left a vital area of constitutional law in a gray zone. Their justification was that Trump's actions were already jeopardizing the 2020 election and couldn't wait for long court battles to drag out.

Perhaps the most troubling legacy of this impeachment lies in the polarized nature of American politics itself.

The reality of two parties pulled towards their most radical extremes raises questions about the effectiveness of the Constitution itself. Few Republicans in the House questioned Trump's behavior in their floor speeches on Wednesday. The picture will be the same in the Senate. No Republican who wants a political future can afford to cross the President. If roles were reversed and a Democratic president as powerful as Trump had in a similar fashion, there's no guarantee that his or her party would have acted aggressively to constrain them.