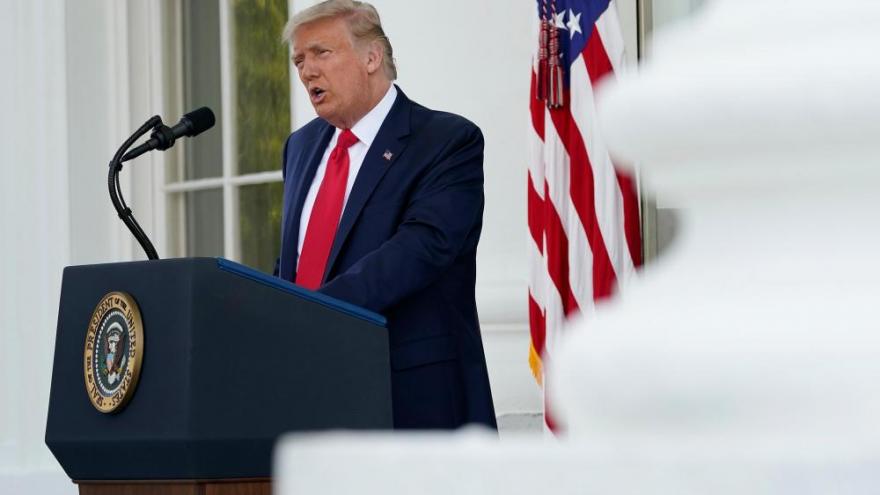 President Donald Trump launched an unprecedented public attack against the leadership of the US military on Monday, accusing them of waging wars to boost the profits of defense manufacturing companies.

(CNN) -- President Donald Trump launched an unprecedented public attack against the leadership of the US military on Monday, accusing them of waging wars to boost the profits of defense manufacturing companies.

"I'm not saying the military's in love with me -- the soldiers are, the top people in the Pentagon probably aren't because they want to do nothing but fight wars so that all of those wonderful companies that make the bombs and make the planes and make everything else stay happy," Trump told reporters at a White House news conference.

They also followed efforts by Trump to convince the public that he had not made a series of reported disparaging remarks about US military personnel and veterans, which were first reported by The Atlantic magazine.

A former senior administration official confirmed to CNN that Trump referred to fallen US service members at the Aisne-Marne cemetery in crude and derogatory terms during a November 2018 trip to France to commemorate the 100th anniversary of the end of World War I. Other outlets, including Fox News, have confirmed much of The Atlantic's reporting, which Trump and the White House vehemently deny.

Some have expressed concern that the President's Monday accusations against the military's top brass could have a corrosive effect.

"The President's comments about the motivations of military leaders not only demeans their service and that of those they lead; he lends credence to the very disdain and thoughtlessness he tries to deny," retired US Navy Rear Admiral and CNN analyst John Kirby said.

The Pentagon did not respond to a request for comment on Monday's remarks.

The Chief of Staff of the Army, Gen. James McConville, declined to comment directly on the Trump's statement on Tuesday but rejected the idea that military commanders are influenced by defense firms.

"I can assure the American people that the senior leaders would only recommend sending our troops to combat when it's required in national security and the last resort. We take this very, very seriously in how we make our recommendations and I think that's all I can really say on that, I feel strongly about that," he said at an event hosted by Defense One.

McConville also noted that many of the top military leaders at the Pentagon "have sons and daughters who have gone to combat or may be in combat right now."

White House Chief of Staff Mark Meadows appeared to attempt to walk back Trump's comments during an interview with Fox Business on Tuesday, saying the President's accusations against the "top people at the Pentagon" were not directed specifically at people like Secretary of Defense Mark Esper or the Chairman of the Joint Chiefs of Staff Gen. Mark Milley.

"Those comments are not directed specifically at them as much as it is what we all know happens in Washington, DC," Meadows said, saying "That comment was more directed about the military industrial complex."

While Trump has publicly disparaged the service of several high-profile veterans such as the late Sen. John McCain and his former Secretary of Defense, retired Gen. Jim Mattis, Monday's broadside was on a new level targeting leaders he appointed to carry out his orders.

Trump has also repeatedly touted boosting the defense budget as one of his administration's major accomplishments, citing it as evidence of his support for the military, spending that has also benefited defense contractors.

CNN has previously reported that relations between Trump and Esper are tense, with Trump believed to be on the verge of replacing him. But, less than two months from the presidential election, the Pentagon's top commanders are growing increasingly exhausted and worried about their relationship with the President, several defense officials tell CNN.

A critical area of concern is how the Pentagon would respond if Trump invokes the Insurrection Act to put US military troops on the streets to deal with civilian protestors as he continues to stoke divisions across the country in the run up to the election. Trump floated the idea last month and, after he first made the threat in June, Esper publicly broke with him by saying he opposed any such move.

To avoid a new showdown with the White House, for the last several weeks, top military officials -- including Milley -- have been getting regular briefings on civil unrest in major cities across the country. The idea is to be ready with alternative plans for state-activated National Guard and other federal civilian law enforcement rather than have active duty troops potentially clash with protesters, according to several defense officials.

Another issue that could lead to a clash between Trump and military leadership is the $740 billion defense bill that would strip the names of Confederate generals in the face of vocal opposition from Trump who said he'd veto any move.

The entire Joint Chiefs have made it clear they want to eliminate what they see as the divisive symbols of the Confederacy.

Milley did not hold back on the issue in appearance before Congress in July, stating that "those officers turned their back on their oath," referring to the names on the bases. "It was an act of treason, at the time, against the Union, against the Stars and Stripes, against the US Constitution."

Military leadership have embarked on several initiatives aimed at improving racial inclusion. Officials say it is vital work to ensure that when troops go to war, they are a cohesive fighting force.

There are also very real concerns about the aftermath of November's election, particularly if the result is not immediately clear after election night.

Last month Milley told members of Congress that the military will not play a role in the election and won't help settle any disputes if the results are contested.

"In the event of a dispute over some aspect of the elections, by law U.S. courts and the U.S. Congress are required to resolve any disputes, not the U.S. Military," Milley wrote in a letter to the House Armed services committee.

"I believe deeply in the principle of an apolitical U.S. military," Milley wrote.

Despite what Milley stated, should there be some kind of constitutional crisis if the election result is unclear, the military could well be put in a tricky position especially as Trump's opponent, former Vice President Joe Biden, floated the idea they might become involved in an interview in June.

"I promise you, I'm absolutely convinced they will escort him from the White House with great dispatch," Biden said, referring to the US military's Joint Chiefs of Staff.

On top of that uncertainty there are concerns Trump may launch military action against an adversary before Inauguration Day, regardless of who wins the White House are also front and center for the top brass.