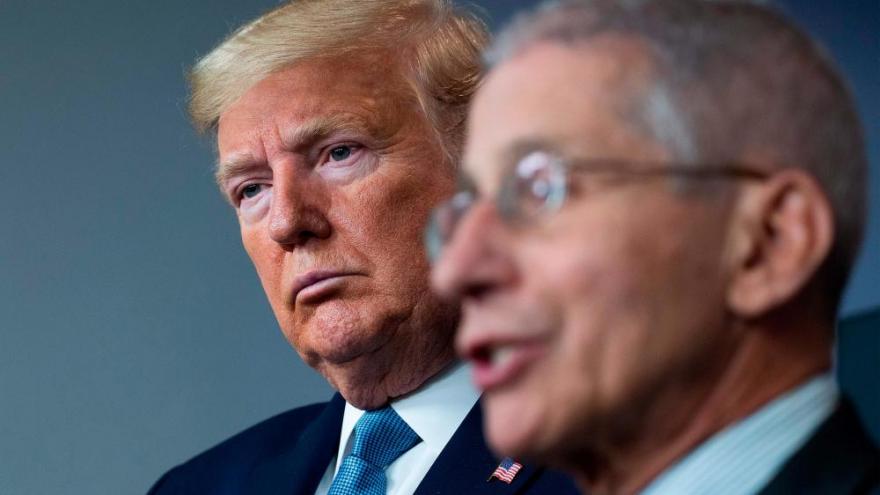 President Donald Trump lashed out at criticism of his handling of the coronavirus crisis during a grievance-fueled appearance from the White House that featured a propaganda-like video he said was produced by his aides.

(CNN) -- President Donald Trump lashed out at criticism of his handling of the coronavirus crisis during a grievance-fueled appearance from the White House that featured a propaganda-like video he said was produced by his aides.

The appearance only affirmed the impression that some of Trump's chief concerns amid the global public health disaster are how his performance is viewed in the media and whether he's being fairly judged.

He clearly did not believe that was the case Monday. He stepped to the podium armed with a video meant to frame his response in a positive light after his initial handling of the crisis has come under increasing scrutiny.

After it aired, Trump grew increasingly irate as reporters probed the time line of his response, claiming the criticism wasn't fair and that he'd handled the outbreak effectively.

"Everything we did was right," Trump insisted after an extended tirade against negative coverage.

Pressed later about his authority to reopen parts of the country, Trump delivered an eyebrow-raising statement asserting absolute control over the country.

"When somebody is president of the United States, your authority is total," he said. He later added he would issue reports backing up his claim, which legal experts say isn't supported by the Constitution.

Before the President's extended defense of himself, Dr. Anthony Fauci stepped to the podium to clarify comments he'd made a day earlier about the administration's handling of the global coronavirus pandemic, a striking show of reconciliation following a day of questions about his future on the White House task force.

Fauci said he was responding to a "hypothetical question" during an appearance on CNN's "State of the Union" program on Sunday when he said more could have been done to save American lives. He claimed his response "was taken as a way that maybe somehow something was at fault here" and said his remark about "pushback" inside the administration to some of his recommendations was a poor choice of words.

The episode capped a stretch where Fauci's position in the administration seemed tenuous. Trump on Sunday evening retweeted a message critical of Fauci's comments on CNN along with the hashtag #FireFauci.

Trump shrugged off the retweet on Monday -- "I retweeted somebody," he said, "it doesn't matter" -- but many of Trump's allies in the conservative media have fueled calls for Fauci's ouster, painting him as overly focused on the health aspects of the coronavirus crisis and not attuned to Americans' economic suffering.

Fauci, the nation's top infectious disease expert, conceded to CNN's Jake Tapper on Sunday morning that earlier mitigation efforts could have saved more lives and again called for a cautious reopening of the nation, despite Trump's calls to quickly restart the economy.

"You could logically say that if you had a process that was ongoing and you started mitigation earlier, you could have saved lives," Fauci said.

But a day later, he sought to characterize that comment as hypothetical and not about any specific actions that could or should have been taken before Trump announced social distancing recommendations last month.

Fauci said that there were discussions among the "medical people" about the pros and cons of strong mitigation efforts, but when he and Dr. Deborah Birx, the White House coronavirus response coordinator, ultimately recommended mitigation efforts to the President for the first time last month, Trump listened.

"The first and only time that Dr. Birx and I went in and formally made a recommendation to the President to actually have a 'shutdown' in the sense of not really shut down, but to have strong mitigation, we discussed it," Fauci said. "Obviously there would be concerns by some, and in fact, that might have some negative consequence. Nonetheless, the President listened to the recommendation and went to the mitigation."

Fauci added that when he and Birx realized the initial 15-day guidelines were not enough and would need to be extended, Trump listened to that recommendation as well.

"The next second time that I went with Dr. Birx into the President and said 15 days are not enough, we need to go 30 days, obviously there were people who had a problem with that, because of the potential secondary effects, nonetheless, at that time the President went with the health recommendations, and we extended it another 30 days," Fauci said.

Fauci's attempts to clarify his earlier comments reflected an attempt to quell speculation he was on shaky terms with the President, who has come under pressure to reopen parts of the economy quickly by some wealthy friends and economic advisers.

Trump spent part of the Easter weekend calling allies and associates complaining about recent media coverage of his handling of the coronavirus pandemic, people familiar with the conversations said.

Trump believes "everybody is trying make themselves look good," said one source, who claimed the President has been fixated on two government officials at the center of the response: Fauci and Health and Human Services Secretary Alex Azar.

"He's been fretting about Fauci for a while," the source said of Trump's focus on the popular public health expert, summing up Trump's comments about the doctor as "why isn't Fauci saying nice things about me?"