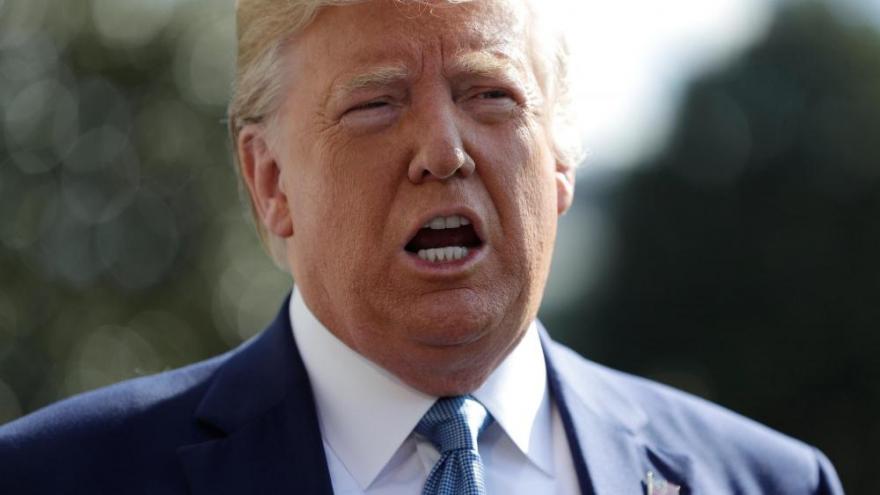 President Donald Trump issued a proclamation that will bar immigrant visa applicants from entering the United States unless they can prove they will have health insurance or the means to pay for medical care.

(CNN) -- President Donald Trump issued a proclamation on Friday that will bar immigrant visa applicants from entering the United States unless they can prove they will have health insurance or the means to pay for medical care.

Visa applicants will have to prove to consular officials that they will be covered by an approved health insurance within 30 days of entry into the US or possess the financial means to "pay for reasonably foreseeable medical costs." The new requirement could make it more difficult for people -- particularly ones without financial means -- to immigrate to the US. It will take effect on November 3.

"Immigrants who enter this country should not further saddle our healthcare system, and subsequently American taxpayers, with higher costs," Trump said in the proclamation.

Exceptions to the rule include children of US citizens, unaccompanied minors, permanent residents who are returning to the US after being overseas less than a year, and "special immigrant visas" for Iraqi and Afghan nationals who worked for the US government, and their families.

Doug Rand, a former Obama official who worked on immigration policy, told CNN on Saturday that the policy would apply to some half a million people seeking green cards from abroad -- most of whom will be the parents and spouses of US citizens.

The proclamation sidesteps Congress, along with the normal executive branch regulatory process, and does not provide an opportunity for public comment, according to Rand.

He knocked it as a "hastily written" directive from the White House, noting that the standards in the order are not "defined clearly."

"What does foreseeable medical expenses mean? How much money is that? How do you prove that you're going to get health insurance in the future? It's silent on all these things. There's no particular form that has been put out there for people to fill out," said Rand, who is now the co-founder of Boundless Immigration, a company that helps immigrants obtain green cards and citizenship.

Friday's proclamation falls in line with the administration's attempts to restrict legal immigration and reshape the legal immigrant population in the US. It's likely to face court challenges from immigrant rights advocates, who are already decrying the proclamation.

Rand predicted that "litigation is inevitable."

"I wouldn't bet on this actually going into effect a month from now. In the meantime, it's going to sow immense fear and confusion," Rand told CNN.

The proclamation points to the same sections of the Immigration and Nationality Act the Trump administration has used in other efforts to restrict legal immigration, including the travel ban.

It comes as another administration policy targeting legal immigration -- the public charge rule -- is set to go into effect later this month. That rule makes it more difficult for immigrants who rely on government assistance like Medicaid, subsidized housing and food stamps to obtain legal status.

When announcing the public charge rule in August, acting US Citizenship and Immigration Services Director Ken Cuccinelli said it will encourage "self-reliance and self-sufficiency for those seeking to come to or stay in the United States." But Immigrant advocates have argued that the rule would discriminate against those from poorer countries, keep families apart and prompt legal residents to forgo needed public aid.