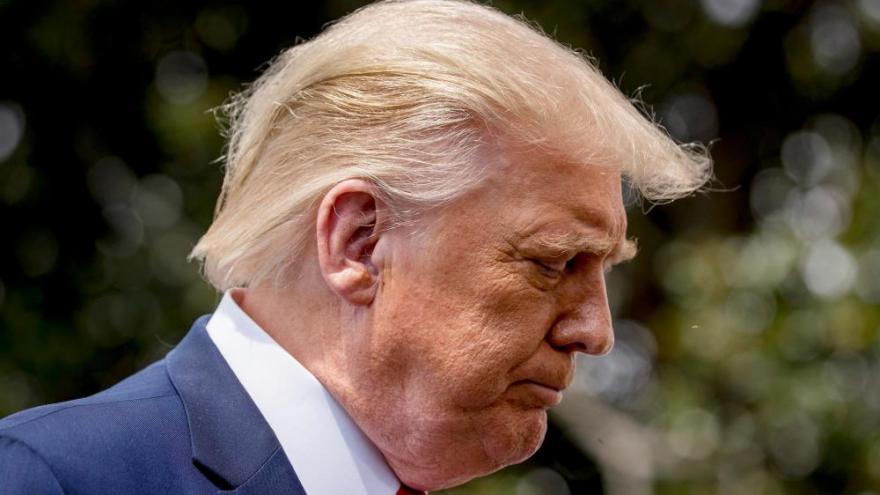 President Donald Trump, seen here on the South Lawn of the White House in Washington, Thursday, Aug. 6, 2020, issued on Thursday an executive order banning TikTok from operating in 45 days if it's not sold by Chinese parent company.

(CNN) -- President Donald Trump on Thursday issued executive orders that would ban the social media app TikTok and WeChat from operating in the US in 45 days if they are not sold by their Chinese-owned parent companies.

The orders, which use similar language, do not state that a certain amount of money from the sale needs to be sent to the US Treasury Department, which the President has been insisting on for several days.

The order regarding TikTok prohibits after 45 days "any transaction by any person, or with respect to any property, subject to the jurisdiction of the United States, with ByteDance Ltd.," the Chinese company that owns the social media platform.

The move turns up the pressure on negotiations over the popular video app's future through a potential sale. The dramatic back and forth began when Trump said last Friday night that he would ban TikTok from operating in the United States using emergency economic powers or an executive order.

Microsoft said Sunday that it was pushing forward with talks to acquire the app following a conversation between CEO Satya Nadella and the President. On Monday, Trump set September 15 as the deadline for TikTok to find a US buyer. Failing to do so, he said, would lead him to shut down the app in the country. In an unusual declaration, Trump also said any deal would have to include a "substantial amount of money" coming to the US Treasury.

Thursday's order alleges that TikTok "automatically captures vast swaths of information from its users," such as location data and browsing and search histories, which "threatens to allow the Chinese Communist Party access to Americans' personal and proprietary information -- potentially allowing China to track the locations of Federal employees and contractors, build dossiers of personal information for blackmail, and conduct corporate espionage."

Shortly after issuing the order regarding TikTok, Trump issued a similar order for WeChat, a group chat app owned by Tencent, a Chinese based company.

For WeChat, which allows its users to transfer funds to each other, the order states it will ban financial transactions with Tencent. The order states "any transaction that is related to WeChat by any person, or with respect to any property, subject to the jurisdiction of the United States, with Tencent Holdings Ltd. (a.k.a. Téngxùn Kònggǔ Yǒuxiàn Gōngsī), Shenzhen, China, or any subsidiary of that entity, as identified by the Secretary of Commerce (Secretary) under section 1(c) of this order."

National security concerns have long fueled policymakers' reservations surrounding the apps. Treasury Secretary Steven Mnuchin told reporters last week at the White House that the US government was conducting a national security review of TikTok and was preparing to make a policy recommendation to Trump.

Prior to Trump's threatened ban last Friday, people working on the issue within the Trump administration expected the President to sign an order to force ByteDance to sell the US operations of TikTok, according to a person familiar with the matter, in a move aimed at resolving policymakers' concerns that the foreign-owned TikTok may be a national security risk.

The order also claims that the platform censors or disseminates content in keeping with the Chinese Communist Party's agenda, citing "when TikTok videos spread debunked conspiracy theories about the origins of the 2019 Novel Coronavirus."

TikTok slammed the order in a pointed statement on Friday, saying it "sets dangerous precedent" undermining "global businesses' trust in the United States" and vowed to pursue all "remedies available," including legal action.

"We are shocked by the recent Executive Order, which was issued without any due process," the company said. "For nearly a year, we have sought to engage with the US government in good faith to provide a constructive solution to the concerns that have been expressed. What we encountered instead was that the Administration paid no attention to facts, dictated terms of an agreement without going through standard legal processes, and tried to insert itself into negotiations between private businesses."

Tencent, meanwhile, "is reviewing the executive order to get a full understanding," a company spokesperson said.

Many of TikTok's fans have panicked over the app's uncertain future. After Trump's threat last Friday, TikTok users across the US began livestreaming and posting videos in tribute to what they feared was the end of the app. Others were strategizing ways to get around a ban, including by trying to trick servers to make it look like they're browsing from a different country where TikTok is allowed to operate.

The President's threat to shut down the platform also comes a month after a stunt organized mainly through TikTok may have led to a sparsely-attended Trump campaign rally in Tulsa, Oklahoma. In the days leading up to the June 20 rally, a coordinated effort was underway on TikTok encouraging people to register online for the free event and not show up.