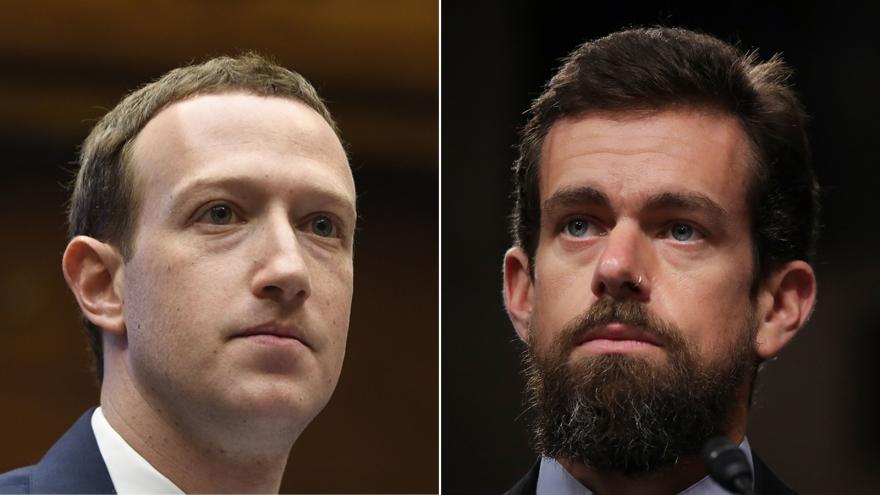 (CNN) -- Former President Donald Trump on Wednesday filed proposed class-action lawsuits targeting Facebook and its CEO Mark Zuckerberg and Twitter and its CEO Jack Dorsey, as well as YouTube and its parent company's CEO Sundar Pichai, in a Hail Mary move after being removed from their platforms. Courts have typically dismissed similar suits, and these are likely doomed from the start as well.

The announcement about the lawsuits comes after the companies removed Trump's access to their platforms in the aftermath of the January 6 riot on Capitol Hill. Twitter banned Trump altogether, and he is currently suspended from Facebook for at least two years. YouTube also suspended Trump in January, but it said in March that his account would be reinstated when the company is confident that the risk of violence has receded.

Tech companies have consistently rejected claims that their platforms discriminate based on partisan ideology. Independent studies have not corroborated such accusations, and several have found that partisan voices, particularly on the right, are among the most engaged-with on the platforms.

Trump's suits continue a trend that began during his presidency: Throwing the book against companies he perceives to be a threat to his political brand. Last spring, while he was still in office, Trump signed an executive order aimed at "preventing online censorship" and seeking to expand legal liability for tech companies.

But the tech companies are legally permitted to run their platforms as they see fit, and courts have dismissed a string of similar lawsuits. Facebook, Twitter and YouTube all cited the potential for future incitement of violence or risks to public safety following the Capitol riot in announcing their decisions to remove Trump's accounts.

Trump announced the suits during a press conference Wednesday, saying that he is asking a court in Florida "to order an immediate halt to social media companies' illegal, shameful censorship of the American people."

"We're going to hold big tech very accountable," he said. During the nearly hour-long event, Trump and others involved in the effort made grandiose claims about the potential for the lawsuits that are likely at odds with the suits' actual potential for success.

Less than an hour after the event, Trump's team began sending out fundraising appeals related to the lawsuits. The website recruiting participants for the proposed class action suitsalso featured a link to donate, and the Republican National Committee sent out a fundraising appeal invoking the suit as well.

The complaints against Twitter, Facebook and YouTubeclaim that the platforms' removals of Trump amount to censorship and allege that the decisions violate his First Amendment right to free speech. Such actions by the companieshave previously been protected under Section 230of the Communications Act of 1934, a federal law that provides legal immunity to websites that moderate user-generated content, and has been used by tech platforms to nip many lawsuits in the bud.

"Plaintiff respectfully asks this Court ... to prohibit Defendants from exercising censorship, editorial control, or prior restraint in its many forms over the posts of President Trump and Putative Class Members," the Twitter complaint states. (A court still must certify that each of the lawsuits can proceed as a class action.)

The complaints also take issue with the way that the platforms attempted to address the spread of misinformation about the Covid-19 pandemic, including their leaning on the CDC -— which Trump clashed with as president and which the suit falsely claims has a "highly questionable reputation" — to help determine what information about the virus and treatments for it was true and what was false and dangerous.

Prior legal efforts against Big Tech

The push to bring legal action against tech platforms over bias allegations has spread nationwide. In May, Florida passed a law allowing politicians that have been suspended or removed from social media to sue those companies.

But the effort has run up against the realities of current law — and the Constitution. Last week, a federal judge blocked Florida's law from going into effect, saying government attempts to force social media companies to host political speech violates the First Amendment. (Florida Gov. Ron DeSantis has vowed to appeal.)

The judge's ruling also said the Florida law ran counter to Section 230, which Trump had sought to weaken with his executive order.

In Congress, numerous bills have been proposed to narrow the scope of Section 230, including by some Democrats who believe tech companies are not doing enough to curb hate speech and harassment online.

But much of the momentum for changing Section 230 has come from Republicans upset about how social media companies have enforced their rules when conservatives have broken them. Trump, in his order, accused tech companies of "engaging in selective censorship that is harming our national discourse," and pushed for the Federal Communications Commission to "clarify" Section 230.

Legal experts and FCC officials themselves questioned the agency's authority to do that, citing the same First Amendment issues that tied up the Florida law. President Joe Biden later rescinded Trump's order.

Now, having failed to turn the machinery of the US government against the tech industry, Trump is trying to get at it through the courts himself. But with Section 230 still on the books, it's unclear how he could succeed.

Trump's suits do advance an unusual argument to try to get around that, but legal experts said that argument also lacks merit and is not likely to succeed.

A key claim in the suits is that because it coordinated with and relied on the guidance of public health officials around information and misinformation about the coronavirus pandemic, social media should be treated as a "state actor" subject to First Amendment restrictions on censorship.

The idea is a "huge stretch on the law and the facts," said Carl Tobias, a law professor at the University of Richmond. "No court has subscribed to this theory, so Trump seems unlikely to prevail."

Andrew Schwartzman, senior counselor at the Benton Institute for Broadband and Society, said collaboration between the public and private sector does not turn companies into the government.

"Everything in these complaints is preposterous, which should not come as a surprise given Trump's affinity for filing frivolous lawsuits," Schwartzman said. "The fact that platforms talk to the government, and even cooperate on taking down speakers who violate the law or threaten national security does not make them instruments of the state."