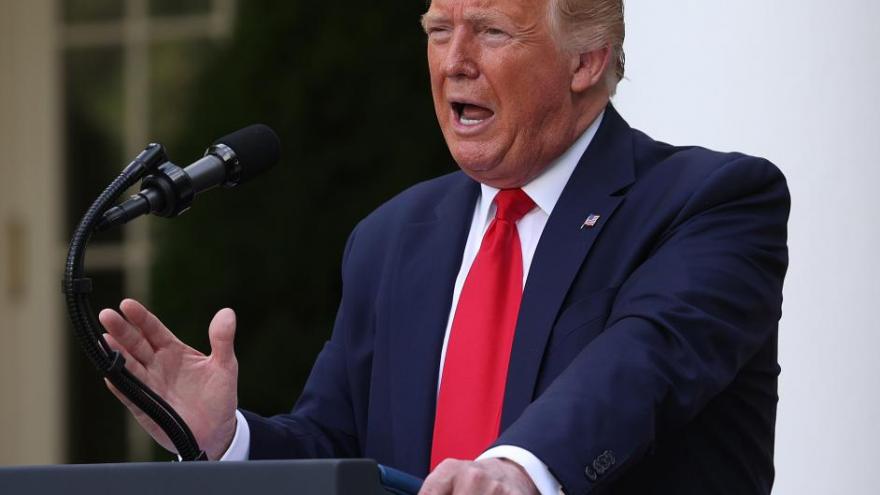 U.S. President Donald Trump, seen here during a briefing at the White House on May 26, 2020 in Washington, DC, is set to announce an executive order against social media companies on Thursday.

Speaking from the Oval Office ahead of signing the order, Trump said the move was to "defend free speech from one of the gravest dangers it has faced in American history."

"A small handful of social media monopolies controls a vast portion of all public and private communications in the United States," he claimed. "They've had unchecked power to censor, restrict, edit, shape, hide, alter, virtually any form of communication between private citizens and large public audiences."

The executive order tests the boundaries of the White House's authority. In a long-shot legal bid, it seeks to curtail the power of large social media platforms by reinterpreting a critical 1996 law that shields websites and tech companies from lawsuits. But legal experts on both the right and the left have raised serious concerns about the proposal. They say it may be unconstitutional because it risks infringing on the First Amendment rights of private companies and because it attempts to circumvent the two other branches of government.

"(Trump) is trying to steal for himself the power of the courts and Congress to rewrite decades of settled law," said Democratic Sen. Ron Wyden of Oregon, the architect of the legislation that the order seeks to reinterpret. "He decides what's legal based on what's in his interest."

The order marks a dramatic escalation by Trump in his war with tech companies as they struggle with the growing problem of misinformation on social media. The President has regularly accused sites of censoring conservative speech.

On Thursday, Trump acknowledged that legal challenges to the order are on the horizon, saying he was "sure they'll be doing a lawsuit."

"I guess it's going to be challenged in court, what isn't?" he asked. "But I think we're going to do very well."

The text of the order, which was reviewed by CNN, targets a law known as the Communications Decency Act. Section 230 of the legislation provides broad immunity to websites that curate and moderate their own platforms, and has been described by legal experts as "the 26 words that created the internet."

It argues that the protections hinge mainly on tech platforms operating in "good faith," and that social media companies have not.

"In a country that has long cherished the freedom of expression, we cannot allow a limited number of online platforms to hand-pick the speech that Americans may access and convey on the internet," the order says. "This practice is fundamentally un-American and anti-democratic. When large, powerful social media companies censor opinions with which they disagree, they exercise a dangerous power."

On Tuesday, Twitter applied a fact-check to two of Trump's tweets, including one that claimed, without evidence, that mail-in ballots would lead to widespread voter fraud. Trump immediately shot back, accusing the social media giant of censorship and warning that if it continued to offer addendums to his messages, he would use the power of the federal government to rein it in or even shut it down.

Tech companies are pushing back on the order.

"By exposing companies to potential liability for everything that billions of people around the world say, this would penalize companies that choose to allow controversial speech and encourage platforms to censor anything that might offend anyone," Facebook spokesman Andy Stone said in a statement.

"Our platforms have empowered a wide range of people and organizations from across the political spectrum, giving them a voice and new ways to reach their audiences," Google spokeswoman Riva Sciuto said. "Undermining Section 230 in this way would hurt America's economy and its global leadership on internet freedom."

Twitter said late Thursday that Trump's order "is a reactionary and politicized approach to a landmark law."

"#Section230 protects American innovation and freedom of expression, and it's underpinned by democratic values," the company tweeted. "Attempts to unilaterally erode it threaten the future of online speech and Internet freedoms."

A fight Trump wants to have

The move highlights what Trump believes is a fight worth having. In many ways, the latest episode with Twitter feeds Trump's narrative that there are powerful forces in the media aligned against him, and that his is the only voice his supporters can trust.

"This plays right into President Trump's hands," said Jason Miller, the communications director for Trump's 2016 campaign and someone who has been directly involved with Trump's social media strategy. "They basically handed him a massive gift."

Many of Trump's political allies rushed to his defense on Wednesday.

"Twitter is engaging in 2020 election interference. They are putting their thumb on the scale," said Florida Republican Rep. Matt Gaetz, a loyal Trump supporter and surrogate during an appearance on the Steve Bannon-produced podcast War Room Pandemic. "The notion that they would outsource fact checking to people who have been wrong about everything is an insult."

Trump campaign manager Brad Parscale said that his team no longer pays for advertising on Twitter and accused the tech giant of purposefully influencing the election to hurt the President.

"We always knew that Silicon Valley would pull out all the stops to obstruct and interfere with President Trump getting his message through to voters," Parscale said in a statement. "Partnering with the biased fake news media 'fact checkers' is only a smoke screen Twitter is using to try to lend their obvious political tactics some false credibility."

The President made the decision to warn Twitter despite the fact that the company and most other prominent social media platforms have allowed him and his associates to peddle unsubstantiated conspiracy theories with few constraints. While Twitter added the fact check to Trump's tweets on mail-in voting, it did not do so on any of his recent tweets baselessly suggesting MSNBC host Joe Scarborough was somehow involved in the death of a former aide, despite a plea from the aide's widower to take the tweets down.

Trump's Twitter habits have been scrutinized for virtually his entire political career, but people familiar with his use of the platform describe less of a strategy and more of a mindset as he or an aide taps out messages.

Other people inside the administration, and even some of Trump's closest advisers, are regularly caught off-guard by what appears on his feed -- if not always surprised.

While his messages often have the effect of distracting from an unfortunate headline, people close to the President say it is their impression that he genuinely believes many of the more conspiratorial things he sends -- including debunked theories about his predecessor -- and that he isn't raising them only in the hopes of diverting attention elsewhere.

Trump's top social media adviser, Dan Scavino Jr., was recently elevated to become one of the highest-ranking officials in the West Wing. His title, deputy chief of staff for communications, belies the fundamental role he plays both in Trump's use of Twitter and in his life generally. Trump trusts Scavino almost unreservedly. Scavino has worked for the President since before the 2016 campaign when he was a manager at one of Trump's golf clubs.

Scavino is usually the person who locates the internet content -- sometimes from fringe sources and often incendiary -- that finds it way to Trump's Twitter feed, though other friends and advisers have suggested tweets and retweets as well.

Scavino's West Wing office provides him regular access to the President, as does his near-ubiquitous presence on Trump's trips, where he is often seen videotaping or photographing the President. He is believed to be the only other person with access to @RealDonaldTrump, though the mechanics of the account have never been confirmed by the White House.

Trump's tweet rants have always been controversial. But recently, as the US death toll from the pandemic has approached 100,000, they have become uncomfortable even for some of the President's most prominent supporters.

"I do think the President should stop tweeting about Joe Scarborough in the middle of a pandemic," said Rep. Liz Cheney, a Wyoming Republican. "He's the commander in chief of this nation and he is causing great pain to the family of the young woman who died."

But those who understand the President's social media habits believe it is unlikely that he will change his behavior any time soon. Miller, who has been present as Trump crafts his tweets, said the President views the platform as an outlet where he can speak directly to his supporters.

"It is one of President Trump's super powers," Miller said. "He understood very early on that social media, Twitter in particular, gave him unvarnished access to the American people and his supporters. What Trump maximized was social media's ability to bypass the artificial conversation created by the mainstream media."

How the order would work

Under the order, the Commerce Department would ask the Federal Communications Commission for new regulations clarifying when a company's conduct might violate the good faith provisions of Section 230 -- potentially making it easier for tech companies to be sued.

That is consistent with a draft order whose text CNN first reported last summer -- and which prompted FCC officials to push back on the plan privately.

"This debate is an important one. The Federal Communications Commission will carefully review any petition for rulemaking filed by the Department of Commerce," FCC Chairman Ajit Pai said Thursday.

The order instructs the Justice Department to consult with state attorneys general on allegations of anti-conservative bias. It bans federal agencies from advertising on platforms that have allegedly violated Section 230's good-faith principles.

Finally, the order would direct the Federal Trade Commission to report on complaints about political bias collected by the White House and to consider bringing lawsuits against companies accused of violating the administration's interpretation of Section 230.

The provisions regarding the FTC could raise additional legal questions, as the FTC is an independent agency that does not take orders from the President.

"The FTC is committed to robust enforcement of consumer protection and competition laws, including with respect to social media platforms, and consistent with our jurisdictional authority and constitutional limitations," FTC spokesman Peter Kaplan said Thursday.

This story and headline have been updated with additional information about the executive order.