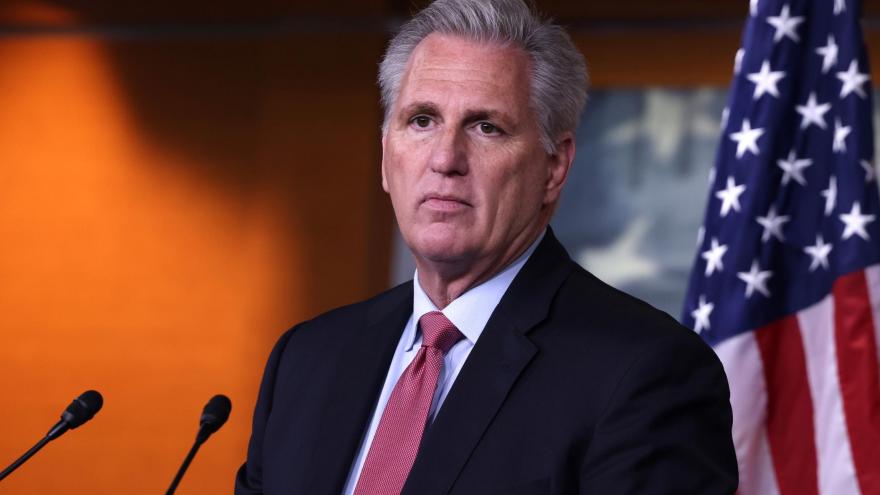 (CNN) -- House Minority Leader Kevin McCarthy has been maneuvering behind the scenes to contain the fallout over damning and contradictory conversations he had with other GOP lawmakers about then-President Donald Trump in the immediate aftermath of January 6.

The California Republican dialed up key GOP members throughout Friday and spoke to Trump by phone Thursday night, according to multiple Republicans. And he has so far managed to calm nerves inside the House GOP Conference and prevent a public revolt from his right flank, who could jeopardize his path to the speakership if Republicans win the House -- depending on the size of their potential majority that his closest advisers are trying to expand to avoid any problems.

In an interview published in The Wall Street Journal on Friday night, Trump said his relationship with McCarthy remained good.

"He made a call. I heard the call. I didn't like the call. But almost immediately -- as you know, because he came here and we took a picture right there -- you know, the support was very strong," Trump told the Journal, referring to when McCarthy had trekked down to Trump's Mar-a-Lago club in Palm Beach, Florida, weeks after January 6 and posed for a picture with Trump in an effort to get back in his good graces.

Trump continued: "I think it's all a big compliment, frankly," referring to the Republicans who had initially criticized him after January 6 but quickly changed their tune. "They realized they were wrong and supported me."

McCarthy -- whose office did not return multiple requests for comment about why he had lied or his whereabouts on Friday -- finally broke his public silence on the controversy Friday evening, speaking to local reporters following a school ceremony for students in California.

McCarthy tried to explain his comments by saying he had just been walking through potential scenarios about Trump's fate and hadn't been advocating for any of them.

"On a phone call right after January 6, I was asked by Liz Cheney about the 25th Amendment and to explain what else would happen," McCarthy told reporters. "I just walked through different scenarios. That's all that happened. I think the phone call is overblown."

"No, I have never asked the president to resign. I never thought he should resign," McCarthy said when pressed on whether he had ever believed at any point that Trump should resign. "What I was asked on a phone call was about the process, the 25th Amendment, whether someone was impeached. We walked through ifs, ands and buts. It was never in the process to ask Trump to resign."

McCarthy is expected to address his conference on the matter when Republicans meet privately next Wednesday, hoping to move past a controversy that revealed his privately held views of Trump soon after the January 6, 2021, attack, comments that he initially denied making only to have secret recordings flatly contradict his public assertions.

Some Republicans predicted there could be fireworks at Wednesday's closed-door meeting as McCarthy is forced to answer uncomfortable questions about his past remarks, but they ultimately believe the controversy will blow over.

"People will talk and some knives will be out, but that's the nature of Congress. At the end of the election cycle we are going to win back the majority. Kevin's leadership will be a big part of why that happens," said Rep. Kelly Armstrong, a North Dakota Republican. "It doesn't make any sense to throw the guy who has taken all the incoming for two years under the bus right when we get control of the wheel."

Key to McCarthy's ability to tame the potential backlash is that he has told GOP lawmakers that Trump isn't upset with him over the bombshell reporting and audio clips from The New York Times, in which McCarthy is heard telling other GOP leaders that he planned to advise Trump to resign, among other things. McCarthy never ended up telling the then-President to step down, however, which is part of the reason Trump isn't holding a grudge over it, GOP sources told CNN.

McCarthy has suggested to allies that he believed he was acting in Trump's best interests -- given the bipartisan push to impeach and convict him after January 6 -- and that it would have been easier for the then-President to just resign, according to a Republican who spoke to the GOP leader on Friday.

One senior House Republican told CNN on Friday that he had spoken to McCarthy, who relayed to him that "Trump was fine."

"The only one who matters is Trump," the Republican told CNN. "And if Trump is fine, it's not an issue."

Plus, McCarthy's initial criticism of Trump after January 6 was already widely known and shared by many others inside the GOP conference. Weeks later, McCarthy went back to embracing Trump, diminishing his role in the attack and working hard to stay in his good graces.

Members and aides also argue that the fact that McCarthy first issued a statement vehemently denying he was considering asking Trump to resign only to be confronted with the audio on Thursday night hardly matters to most House Republicans who also have a fraught relationship with the press. In fact, some argued it probably boosted McCarthy within the conference; one GOP aide said lying to The New York Times could be seen as a "badge of honor."

Yet several other Republicans acknowledged that lying to the public about his interaction is a political problem that he'll need to clean up.

"Obviously that's a problem," one member of the leadership team told CNN. "The only currency we have with the media is our trust."

McCarthy isn't out of woods yet

Republicans are bracing for another potential shoe to drop. The Times also reported that days after the insurrection, McCarthy privately lamented that Twitter should take away other Republican lawmakers' Twitter accounts; audio of that conversation has yet to be released.

GOP lawmakers and aides say that conversation could be the most damning and problematic for McCarthy, since it runs counter to the party's crusade against Big Tech and their calls to stop alleged conservative censorship, and McCarthy has faced questions about his support for Silicon Valley in the past.

What could ultimately save McCarthy is the size of the Republican majority next year if the GOP wins the House in November. A smaller majority would give more power for Trump die-hards in the conference to knock him off, but a more sizable majority — 20 seats or so — would neutralize that wing.

McCarthy allies already plan to drop record-breaking sums to take back the House and build what they're calling a "governing majority."

"We're working to expand the map deep into Democrat-held territory to deliver a large GOP majority where future Speaker McCarthy can pass a conservative governing agenda and get things done," said Dan Conston, the president of the Congressional Leadership Fund, a McCarthy-aligned super PAC.

In the aftermath of the Times reporting, there has been little criticism publicly from House Republicans, besides from conservative firebrand Rep. Matt Gaetz of Florida, who has long been openly critical of McCarthy. Congress is also out of session for the Easter recess and doesn't return until next week.

But many Republicans have come to McCarthy's defense in the wake of the audio. One senior House Republican said they even emailed McCarthy just to let him know "how much I appreciate his leadership and friendship" and that "he has my full support.

"Republicans are going to take back the majority in November and when we do, Kevin McCarthy will be our speaker," said freshman Rep. Ashley Hinson, a Republican from Iowa.