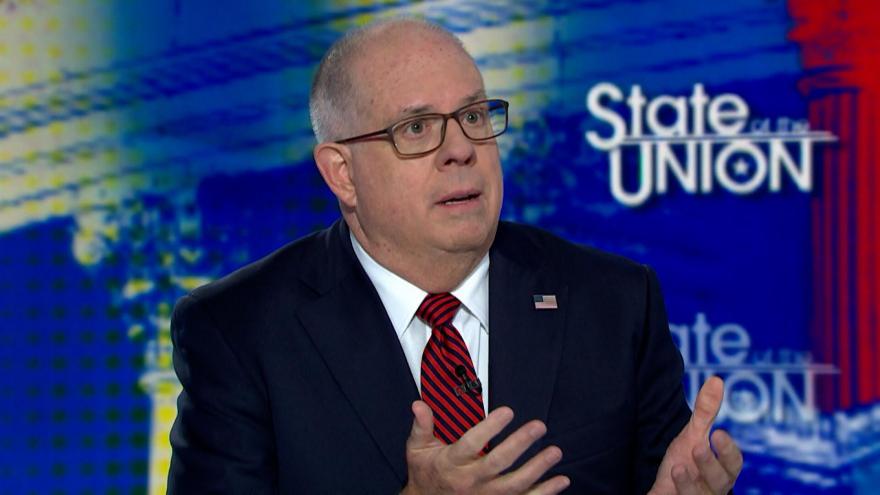 The involvement of former President Donald Trump in 2022 midterm campaigns could hurt the GOP, Maryland Gov. Larry Hogan, a Republican, said Sunday, as the 45th President continues to make endorsements and plans to appear on the campaign trail.

(CNN) -- The involvement of former President Donald Trump in 2022 midterm campaigns could hurt the GOP, Maryland Gov. Larry Hogan, a Republican, said Sunday, as the 45th President continues to make endorsements and plans to appear on the campaign trail.

"If the former president interferes with the primaries and tries to help nominate folks that are unelectable in a general election in, say, swing districts and purple states, that's gonna hurt," Hogan told CNN's Dana Bash on "State of the Union," adding it is an issue to contend with.

Trump has not said whether he will run for reelection in the 2024 presidential campaign but continues to have an influential grip on the Republican party. He endorsed Virginia Gov.-elect Glenn Youngkin, who distanced himself from the former president during the gubernatorial race and continues to peddle lies about the 2020 election. Former New Jersey Gov. Chris Christie, a Republican and frequent Trump critic, on Saturday warned that the party must moved beyond Trump's fixation on the 2020 election in order to continue political gains such as the one in Virginia.

Youngkin's key message during his campaign focused on education, while former Virginia Gov. Terry McAuliffe focused a lot of his campaign message on Trump. A businessman, Youngkin defeated McAuliffe in a state that President Joe Biden won by double digits last year. Winsome Sears and Jason Miyares -- both Republicans -- were elected lieutenant governor and attorney general in the state. Republicans also took full control of the Virginia House of Delegates. Republicans hadn't won a statewide election in the commonwealth since 2009, though Virginia has a history electing a governor from the opposite party of the recently elected president.

Hogan agreed with Christie, telling Bash that the former president is likely not leaving the political arena and that the party "can't look back and constantly relitigate" the 2020 election.

"We got to look to '22 and '24, and we have got to have a message that appeals to more people," he said. "It's not about the former president but there's no question, Glenn Youngkin did a good job of not alienating that base. But Trump never stepped foot in the state, which was a great thing for Glenn Youngkin and the country."