Trump invites a new fight with Democrats over 2020 budget; seeks $8.6 billion for wall 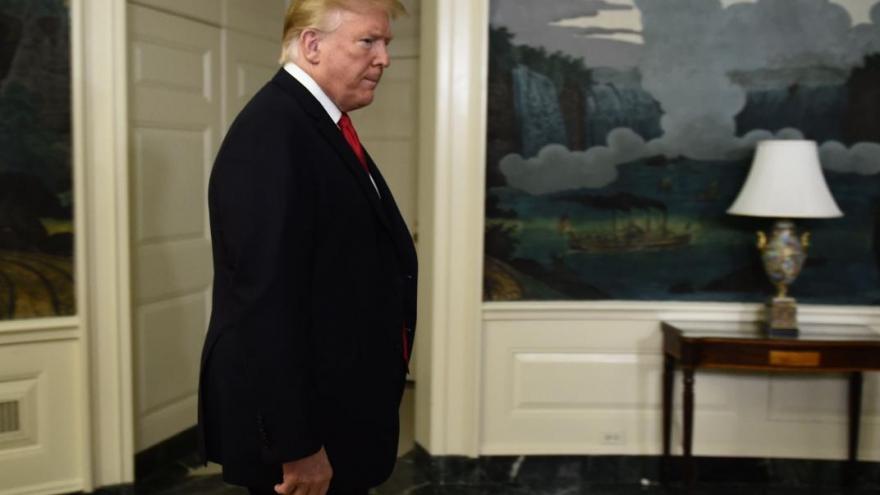 The Trump administration is headed for a budget clash with Congress, with calls for deep domestic spending cuts that lawmakers are likely to ignore as the nation's debt reaches record levels.

(CNN) -- The Trump administration is headed for a budget clash with Congress, with calls for deep domestic spending cuts that lawmakers are likely to ignore as the nation's debt reaches record levels.

On Monday, President Donald Trump is set to deliver his budget roadmap with a promise to balance the budget in 15 years, marking the first time he'll unveil a spending proposal under a divided government with Speaker Nancy Pelosi at the helm of a Democratic-controlled House, and he is expected to face fierce resistance to severe proposed cuts on education, health and environmental protections.

The White House is proposing $2.7 trillion in spending cuts, according to new details released Sunday evening, following a directive by the President to reduce spending by 5% across federal agencies, except for defense spending, as part of its budget plan for fiscal year 2020, which begins on October 1. The proposed cuts come just as Congress will need to decide -- yet again this year -- whether to lift spending caps put into place by law in 2011.

"Our national debt nearly doubled under the previous administration and now stands at more than $22 trillion," said Russell Vought, acting director of the Office of Budget and Management, in a statement previewing the President's budget details. "This budget shows that we can return to fiscal sanity without halting our economic resurgence while continuing to invest in critical priorities."

Long term policy projections, according to the White House, show that policy proposals in the budget would put the US on track to balance the budget by 2034.

Earlier on Sunday, a White House official confirmed Trump will ask for $8.6 billion for a border wall, and an additional $3.6 billion in military construction funds to pay back monies that the administration hopes will be spent this year that the President redirected by executive authority.

Pelosi and Senate Minority Leader Chuck Schumer said Sunday that Trump will not get the $8.6 billion he plans to request for the wall.

"President Trump hurt millions of Americans and caused widespread chaos when he recklessly shut down the government to try to get his expensive and ineffective wall, which he promised would be paid for by Mexico. Congress refused to fund his wall and he was forced to admit defeat and reopen the government. The same thing will repeat itself if he tries this again. We hope he learned his lesson," the two said in a joint statement.

Kentucky Democratic Rep. John Yarmuth, chairman of the House Budget Committee, said Sunday evening in a statement to CNN that the President's budget has "no chance in the House."

"President Trump added nearly $2 trillion to our deficits with tax cuts for the wealthy and large corporations, and now it appears his budget asks the American people to pay the price," said Yarmuth. "With severe cuts to essential programs and services that would leave our nation less safe and secure, the Trump budget is as dangerous as it is predictable."

Congress holds the purse strings of what the government is willing to spend, and Democrats demonstrated their ability to stay unified during the partial government shutdown.

House Financial Services Chairwoman Maxine Waters, a California Democrat, said at a hearing last week that she would fight to ensure robust funding for critical programs overseen by the committee, including reversing steps by the administration to weaken the Consumer Financial Protection Bureau.

"The Trump administration has also consistently put forth budget proposals that make massive cuts to programs that protect the nation's most vulnerable families," Waters said.

The President's new budget will prioritize funding for ending the opioid epidemic, a top priority for the Trump administration, investing in students to receive a high-quality education, modernizing the federal government's antiquated technology along with $80 billion for veteran care.

Trump has previously proposed deep spending cuts on domestic programs as well as entitlement programs like Medicare and Social Security every year of his presidency, and each time Congress has ignored them.

The White House official notes that the forthcoming request for wall funding is different than in previous years when the White House asked for wall money from just one funding source: the Department of Homeland Security (more specifically, CBP). This year, the White House will ask for $5 billion from Customs and Border Protection, but will also request $3.6 billion in military construction funds from the Pentagon.

In addition, the budget contains a request for another $3.6 billion in military construction funds -- but these would be used to "backfill" what the administration hopes to spend this year as a result of the emergency declaration. In other words, the White House is requesting money to pay back the funds that Trump redirected with executive authority, and officials are not counting that sum in the topline number they say they're requesting for the wall (at least $8.6 billion).

The amount of the wall request was first reported by Reuters.

Traditionally, the White House releases its budget proposal to Congress by the first Monday in February, but it was delayed this year due to the shutdown.

In late February, Trump's acting budget chief Vought previewed in an op-ed "historic" cuts in discretionary spending and rolled out plans to employ a war contingency fund as a maneuver to get around the defense budget limit.

"The level of borrowing is unsustainable, and is one of the largest threats to our nation's economic future," Vought wrote in the op-ed.

It's been unclear whether the 5% cut would be in addition to a 9% cut that would be forced by the budget caps set to kick in for the 2020 fiscal year.

Mick Mulvaney, the former chief at the Office of Management Budget who is now the White House acting chief of staff, was a major opponent of what's known as the Overseas Contingency Operations to make up for the cuts to the base defense budget.

During his 2017 confirmation hearing for the OMB role, Mulvaney told lawmakers "he look(ed) forward to having an opportunity to explain to the President why I think it is not a good way to spend American taxpayer dollars."

Democrats have already denounced the administration's maneuver as a budget "gimmick" that would obscure the true costs of the military operations and shortchange other national priorities.

"Rather than being honest and responsible about his budgeting, the President is choosing to deceive the American public yet again," said Yarmuth, chairman of the House Budget Committee, and House Armed Services Chairman Adam Smith, a Washington Democrat, in a joint statement in response to Vought's op-ed.

The President's budget is also expected to include a $100 million for the Women's Global Development and Prosperity Initiative, a White House official told CNN.

The President's daughter, Ivanka Trump, led the creation of the initiative, which was announced last month.

The debate on spending and budget caps will also inevitably intertwine with negotiations to raise the debt ceiling, which kicked back in on March 2.

The federal borrowing limit set by Congress now stands roughly over $22 trillion, a record high. Treasury has already begun to use "extraordinary measures," a tactic both Democratic and Republican administrations have used to continue to pay the country's IOUs.

The ceiling was initially intended to control spending by the federal government, but instead Congress has continued to approve increases to accommodate continued borrowing.

And even though the country reached its debt limit, the Congressional Budget Office estimates Treasury will be able to pay its bills through the fall of 2019.

Democrats for the last two years have blasted Trump's tax cuts for increasing the federal deficit, which the CBO projects will surpass $1 trillion by 2020.

Critics of the President's backed tax cut say it will add an additional $1.9 trillion to the nation's debt. Last year, Trump also reluctantly signed a massive $1.3 trillion spending bill after Democrats pushed for bigger budgets for health and education in exchange for a boost in military spending.

The White House has claimed that the tax cuts will pay for themselves and have been a driving factor in boosting the US economy, and blamed Democrats for the rising deficit after pushing for spending increases last year.

Trump's budget proposal also comes ahead of yet another major fiscal issue that Congress will have to face this year. Lawmakers will need to decide how to resolve the remaining years of spending caps required under the Budget Control Act of 2011.

The law set caps on the government's discretionary spending for a 10-year period. It also included separate limits on defense and non-defense spending that would be triggered by automatic, across-the-board spending cuts.

Unless Congress acts to raise them this year, the $647 billion limit on regular defense spending will drop by $71 billion, or an 11% cut, before adjusting for inflation. The non-discretionary spending cap would fall to $542 billion, or 9%.

"This is not sustainable or responsible," said Yarmuth at a House Budget hearing earlier this week. "We need to raise the caps, for both defense and non-defense spending, to ensure that every American family has the chance to build a better future."