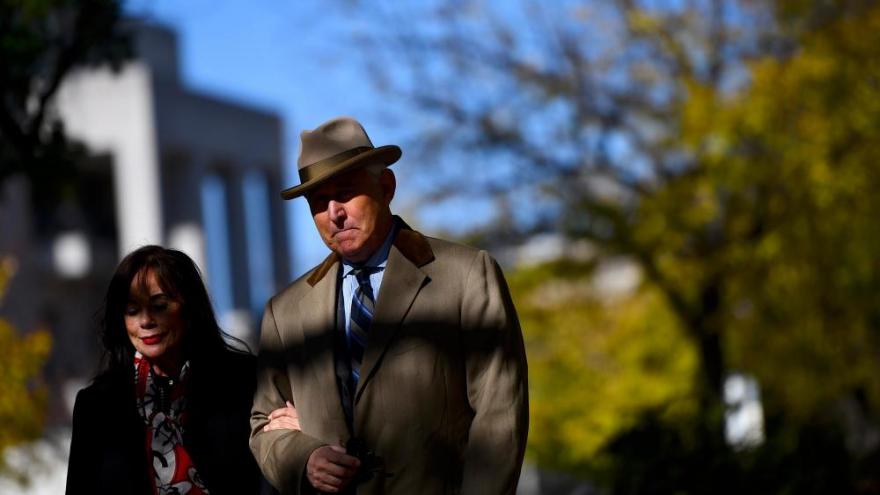 President Donald Trump implied in a pair of interviews that he was ready to grant clemency to Roger Stone, his friend and ally who was convicted of, among other things, lying to federal investigators and is set to go to prison this month.

(CNN) -- President Donald Trump implied in a pair of interviews Thursday that he was ready to grant clemency to Roger Stone, his friend and ally who was convicted of, among other things, lying to Congress and is set to go to prison this month.

Trump is widely expected to pardon or commute Stone's sentence, according to at least half a dozen sources close to the President.

Asked by Fox News host Sean Hannity whether he's considered a pardon or commutation for Stone, Trump said during a phone interview, "I am always thinking."

"You'll be watching like everyone else in this case," he said.

In another interview, with radio host Howie Carr, Trump decried Stone's treatment at the hands of law enforcement and said he may grant his clemency plea.

Told Stone was "praying" for a pardon ahead of the day he is due to report to prison on July 14, Trump said Thursday, those prayers may be worthwhile.

"If you say he's praying, his prayer may be answered," Trump said. "Let's see what happens."

He said Stone is a "good person" and "a character."

Stone was found guilty last fall of five counts of lying to Congress, one count of witness tampering and one count of obstructing a congressional committee proceeding. Among other things, he had misled Congress about his communications with Trump campaign officials in 2016, the jury unanimously decided.

According to prosecutors, Stone lied during testimony and failed to turn over documents to Congress in 2017 showing he had sought to reach WikiLeaks the previous year. He lied about five facts, obscuring his attempt to use intermediaries to get information that could help then-candidate Trump in the election against Hillary Clinton.

Prosecutors initially asked for seven to nine years in prison but Attorney General William Barr retracted that recommendation, hours after Trump had criticized it on Twitter as too harsh.

Four prosecutors withdrew from the case in response to Barr's decision. Two new DC US Attorney's Office supervisors stepped up to handle Stone's sentencing, and a new sentencing memo was released asking for "far less" time.

Stone was eventually sentenced to 40 months in prison earlier this year.

The rapid-fire developments in the case raised questions about the department's independence from political pressure and prompted congressional Democrats to call for the Justice Department inspector general to investigate.