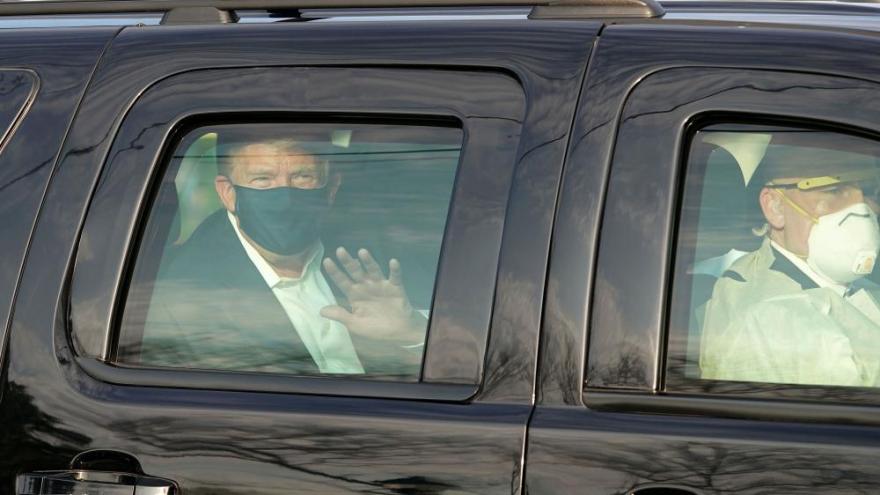 President Trump waves from the back of a car in a motorcade outside of Walter Reed Medical Center in Bethesda, Maryland on October 4, 2020.

(CNN) -- President Donald Trump says he's leaving the hospital after three nights, declaring he is "feeling really good!" and that coronavirus is nothing to fear.

"Don't be afraid of Covid. Don't let it dominate your life," he went on. "We have developed, under the Trump Administration, some really great drugs & knowledge. I feel better than I did 20 years ago!"

Trump's physician was due to provide an update on the President's condition in the 3 p.m. ET hour, the White House said, as an upbeat Trump was telling associates he is desperate to leave Walter Reed National Military Medical Center.

Yet even as the President's health appears to be improving, the situation within his administration was hardly stabilizing. The President's top spokeswoman and two of her deputies tested positive, it was revealed on Monday, adding to a growing list of administration officials and others within the Trump orbit to have contracted the virus.

The viral contagion spreading through Trump's inner circle and among West Wing staffers has caused deep anxiety among administration officials, who fear the scope of the outbreak remains unknown.

At the same time, Trump himself is intent on returning to the building while he combats what his doctors have described as a serious case of the disease requiring intravenous medication and, on at least two occasions, supplemental oxygen.

Bored and eager to appear healthy, Trump has agitated for a swift release and on Sunday made a foray outside the hospital walls for a slow-motion drive-by to greet supporters gathered at a roadside nearby.

People who have spoken to the President over the past day say he sounds in good spirits even as he pushes to be released. Trump was demanding to go back to the White House on Sunday, two sources familiar with the situation told CNN, but was convinced to remain by his medical team.

"He is done with the hospital," one of the sources said of Trump's mood on Sunday. Trump is concerned the sight of him being hospitalized "makes him look weak," the other source said.

Not all of his allies are in agreement, however; the President is being warned if he rushes to leave the hospital and then has a setback requiring readmittance it would be damaging not only to his health but politically as well.

More than two days since he was airlifted to Walter Reed National Military Medical Center, Americans remain largely in the dark about the trajectory of his infection with Covid-19 and the specifics of his condition.

And cases continue to arise in the West Wing after what many aides say has been deep mismanagement of a growing health crisis. Press secretary Kayleigh McEnany wrote she tested positive on Monday morning after a string of negative tests through the weekend.

Combined with the positive tests of two of McEnany's deputies, that brings brings the number of Trump insiders to have contracted coronavirus to more than a dozen, including his wife, senior adviser, personal assistant, campaign manager, two debate prep advisers, party chairwoman and three Republican senators.

McEnany spoke to reporters briefly at the White House on Sunday without wearing a mask. In her statement, she said "no reporters, producers or members of the press are listed as close contacts by the White House Medical Unit."

But her diagnosis heightened the impression of the virus spreading quickly through Trump's staff, who only began wearing masks regularly as he was being transported to hospital on Friday. Some aides have expressed frustration at a lack of communication about the situation.

Mindful of Trump's aversion to appearing weak, the White House has tried to control the optics of his illness with misleading briefings, posed images and the reckless photo-op outside the hospital.

Monday morning, the President's advisers were signaling he would likely be back to the White House by the evening, a prospect first raised by one of his physicians during Sunday's briefing. The messages were funneled through Fox News, which the President has been watching almost without interruption inside the presidential suite at Walter Reed, often growing upset by what he views as exaggerated descriptions of his health.

"I heard from Dr. Conley last night and he said he is still on track for discharge today," Marc Siegel, a medical contributor to the channel, said on Monday. Navy Cmdr. Dr. Sean Conley is the President's lead doctor.

In a separate statement broadcast on Fox, the President's chief of staff Mark Meadows said "we are still optimistic that he will be able to return to the White House later today."

The decision to publicly telegraph a date of expected discharge caused some anxiety among the President's aides, who feared the optics if Trump is not back to the White House by Monday.

It has also led to concern the President is applying pressure on his medical team to leave the hospital earlier than is prudent.

On Saturday, Conley said the most critical stretch of Trump's disease will come seven to 10 days after diagnosis.

Based on current calculations of a positive test on Thursday evening, the President on Monday was only at four or five days. But without knowing when the President's last negative test took place -- information the White House and Conley have refused to provide -- it's not clear how far along the President is in the disease.

As he and his medical team were weighing the time of his potential discharge, Trump was issuing a furious burst of all-caps tweets related to the presidential election.

"NEXT YEAR WILL BE THE BEST EVER. VOTE, VOTE, VOTE!!!!!" he wrote, following by nearly 20 messages each listing an issue he hopes voters will deem important.

A day earlier, in the midst of an aggressive course of treatment, Trump left Walter Reed with his security detail Sunday afternoon so he could take a brief ride in an SUV past supporters cheering him on.

The surprise outing, where Trump waved to his supporters through the window while wearing a mask in the back of his SUV, was an attempted show of strength that displayed the President's questionable judgment, his willingness to endanger his staff and the fact that he still does not seem to comprehend the seriousness of a highly contagious and deadly disease.

Trump's doctors on Sunday provided concerning details about his condition to reporters, including two alarming drops in his oxygen levels. But their professed hope that he could be discharged on Monday -- followed by the afternoon photo-op -- underscored that the primary concern for the President, who was furious at his chief of staff for telling reporters about his troubling vital signs, is projecting a commanding image to the public.

An attending physician at Walter Reed harshly criticized Trump's Sunday drive-by as a risk to the lives of Secret Service agents who accompanied him in his SUV.

"Every single person in the vehicle during that completely unnecessary Presidential 'drive-by' just now has to be quarantined for 14 days. They might get sick. They may die. For political theater. Commanded by Trump to put their lives at risk for theater. This is insanity," Dr. James Phillips tweeted.

Despite the risk posed to others in the hospital, the driver and security, White House spokesman Judd Deere said that "the movement was cleared by the medical team as safe to do" and that "appropriate precautions" were taken, "including PPE."

But with the circle of people in government or close to the President who have tested positive rapidly widening over the weekend -- including at least eight people who attended the Supreme Court nominee announcement in the Rose Garden last month -- there were renewed questions about the White House's commitment to the social distancing and mask-wearing guidance from its own coronavirus task force.

The White House Management Office sent its first staff-wide email Sunday night since Trump tested positive for coronavirus early Friday morning. Until then, staffers had gotten no word about whether to come into work or to remain home given that several of their colleagues tested positive. Stunningly, the email, which was viewed by CNN, states they should not contact the White House testing office if they have symptoms.

Conley, Trump's physician, held a second medical briefing in as many days on Sunday that again raised more questions than answers about the President's condition.

Trump's doctors said that even though the President has had at least two concerning drops in oxygen levels -- one late Friday morning, and the other at an unspecified time on Saturday -- they were hoping he could be discharged as soon as Monday.

Conley admitted Sunday that he had omitted those alarming drops in the President's oxygen levels during Saturday's news conference because he wanted to "reflect the upbeat attitude" that the team and the President had about his condition and didn't want "to give any information that might steer the course of illness in another direction."

Conley said that his evasive answers "came off that we were trying to hide something" but said that "wasn't necessarily true," adding that the President is "doing really well" and is responding to treatment.

The first significant episode occurred late Friday morning when, Conley said, the President had "a high fever and his oxygen saturation was transiently dipping below 94%." The President was given oxygen at that point, Conley said, answering a question he had evaded during his Saturday briefing.

On Saturday, the President's oxygen level dropped again "to about 93%," Conley said. "We watched it and it returned back up." But the incident led doctors to start treating Trump with the steroid drug dexamethasone, which has been shown to help patients with Covid-19. It is typically given to patients on supplemental oxygen or ventilation.

Conley offered no detail about what X-rays or CT scans have shown about whether there has been any damage to the President's lungs.

While the President was still at the White House Friday, he was administered the experimental Regeneron antibody cocktail, a promising treatment that has not yet been approved by the Food and Drug Administration intended to help boost the President's immune system. Once he was at Walter Reed, doctors began a five-day course of the antiviral drug remdesivir, which has been shown to shorten recovery time for some coronavirus patients.