Trump halted stimulus talks. Here's what it means for you 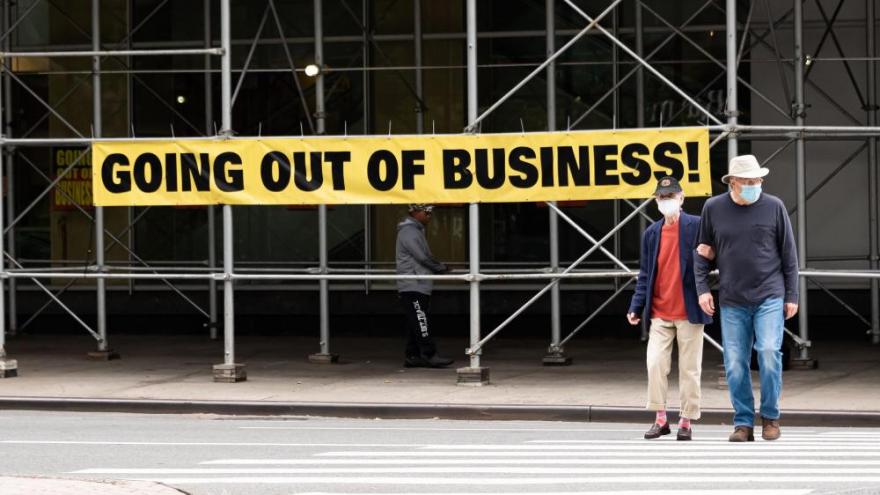 People wearing protective masks walk by a going out of business sign on the Upper West Side as the city continues Phase 4 of re-opening following restrictions imposed to slow the spread of coronavirus on September 27, 2020 in New York City.

(CNN) -- Millions of Americans are still out of work. Many small businesses and major airlines are struggling to stay afloat. And states are still contending with massive budget gaps.

But none of them -- nor others in need of relief from the coronavirus pandemic -- will receive assistance from the federal government anytime soon, now that President Donald Trump has ordered a halt to negotiations with the Democratic-led House of Representatives.

The two sides never got very close in their efforts to pass another major economic rescue package, though talks had been continuing. The House last week released a $2.2 trillion version of the $3 trillion relief bill it had passed in May, while the White House was looking at a package in the $1.5 trillion range.

Another round of federal stimulus funding was seen as vital to propping up the nation's economy at a time when the recovery is weakening. Prior rescue packages provided much-needed money to stabilize Americans who lost their jobs and businesses that lost their customers amid the pandemic.

Just hours before Trump's announcement, Federal Reserve Chairman Jerome Powell reiterated his calls for more fiscal stimulus, saying that "the risks of overdoing it seem, for now, to be smaller" than not providing more help.

"The expansion is still far from complete," Powell said Tuesday at the National Association for Business Economics annual meeting. "Too little support would lead to a weak recovery, creating unnecessary hardships for households and businesses ... Even if policy actions ultimately prove to be greater than needed, they will not go to waste."

Here's what was under consideration:

A second round of stimulus checks for 160 million people

Lawmakers on both sides of the aisle put forth plans that called for sending a second round of direct stimulus payments. More than 160 million Americans received the one-time payments but most of those went out by June.

The payments were worth up to $1,200 for individuals and up to $2,400 per family, with an additional $500 per dependent. Republicans had proposed keeping the amounts the same. Democrats had pushed for sending a more generous second payment, calling for a maximum of $6,000 per household.

Many in Congress felt the jobless should get some additional help after the initial $600 weekly benefits enhancement ran out at the end of July, but they could not agree on a figure.

The House held firm on wanting to extend the benefit through next January, while Senate Republicans had considered legislation that would have provided $300 a week until December 27.

More than 26.5 million people were claiming unemployment benefits in mid-September, according to the most recent Department of Labor figures.

The Paycheck Protection Program gave out more than 5 million emergency loans to small businesses to help them cover payroll, rent and utilities. But the deadline to apply passed by in August. For many, the loan money had been used up even before then.

Both Republican and Democratic lawmakers support reopening the program so that some small businesses could apply for a second loan.

Relief for state and local governments

In their so-called skinny bill released last week, Democrats scaled back their financial lifeline to state and local governments, proposing about $417 billion in assistance, rather than the $875 billion in their May legislation.

Republicans, however, have not been keen on giving more aid to states. In his tweet, Trump said House Speaker Nancy Pelosi is asking "to bailout poorly run, high crime, Democrat States, money that is in no way related to COVID-19."

National education leaders have been asking Congress for billions of more dollars since June, but they've started the new school year without any more aid than what the received in March.

The CARES Act allocated about $30 billion for education, including colleges. About $13 billion of that went to K-12 schools.

Republican proposals have included up to $105 billion more for education and the Democrats' most recent bill, which the House approved last week, called for more than $220 billion for education.

Both sides would have provided additional money for testing, tracing and treatment, though they did not agree on the amount.

The Democrats have pushed for increasing the maximum food stamp benefit by 15% for months, but this provision never made it into any final legislation amid opposition in the Senate.

That boost would provide each recipient with roughly an additional $25 per month.

There were roughly 43 million people in the Supplemental Nutrition Assistance Program, or SNAP, as food stamps are formally known, in April, according to the most recent federal data. That's an increase of nearly 16% from the prior month, and experts say the number has likely only climbed higher since.

Money for the Postal Service

The cash-strapped US Postal Service has asked for money to help cover its pandemic-related losses. A Republican proposal would have forgiven a $10 billion loan it received from Congress earlier in the year. A Democratic plan would have also provided $15 billion in aid.

Republicans pushed for provisions that would limit coronavirus-related lawsuits against businesses, universities, hospitals and health care workers, but Democrats did not support this.

In their recent bill, Democrats called for providing $25 billion in aid to airlines, as well as $3 billion to airline contractors, and extended the prohibition on involuntary layoffs of workers through March 31. Senate Republicans did not mention airlines in their legislation earlier last month.

Airlines have said that additional stimulus would allow them to bring back the roughly 50,000 workers they furloughed on October 1.