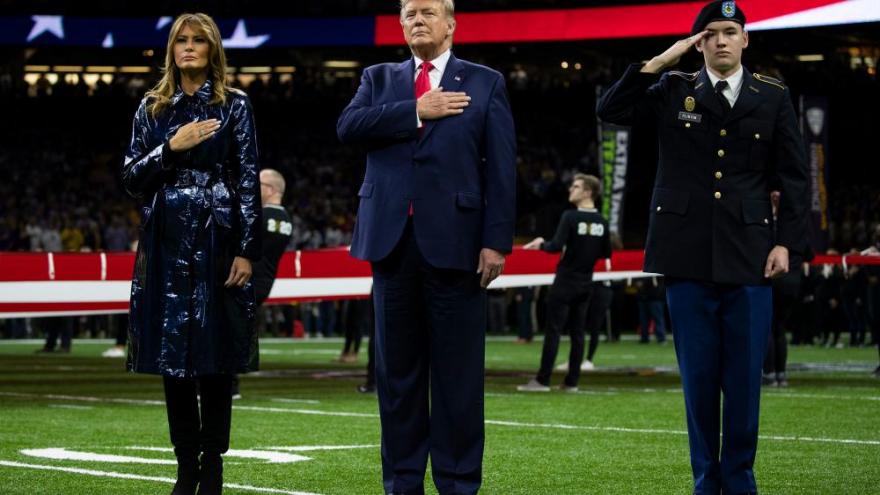 President Donald Trump held a ceremony at the White House for the Louisiana State University football team to celebrate their recent national championship game win. The president and first lady stand for the national anthem before the beginning of the College Football Playoff National Championship game on Monday, Jan. 13, 2020, in New Orleans.

"It is really my great privilege to welcome to the White House the college football national champions, the Louisiana State University Tigers," Trump said during an East Room ceremony filled with players, team staff, administration officials, members of Congress and fans. "This team showed the world what it means to look out for one another."

Trump went nearly the entire ceremony without bringing up impeachment, until he invited members of the team to take pictures in the Oval Office behind the Resolute Desk.

"It's been there a long time -- a lot of presidents, some good, some not so good. You've got a good one now, even though they're trying to impeach the son of a b****," he said to laughter in the room.

During the ceremony, the President touted the economy and at times made jokes.

Last year, the Clemson team was greeted to a buffet of fast food at the White House for their ceremony amid a partial government shutdown. Images of the spread, which was personally paid for by the President, went viral.

"Nice guys and they were very large," Trump said on Friday. "We served them a lot of food. They ate so much food we didn't know what the hell to do with them. They kept eating and eating."

Trump also praised the LSU team's efforts over the last season and spoke about the team's efforts during the final game, which he attended earlier this month.

"On the road to the title, this team overcame a brutal schedule, and I had no idea how brutal until I look at these numbers. You defeated seven teams in the top 10, four in the top five, and beat the national champions of the last four years," Trump said.

"The truth is, with a great coach, an outstanding quarterback, an entire team filled with heart and skill and hope and courage and passion and strength and unbreakable will to win ... this LSU team (will go on to) be remembered as one of the greatest in college football history," he added.

He also joked that LSU quarterback Joe Burrow, the 2019 Heisman Trophy winner, is "going to be so rich." He also called Burrow "a young Tom Brady."