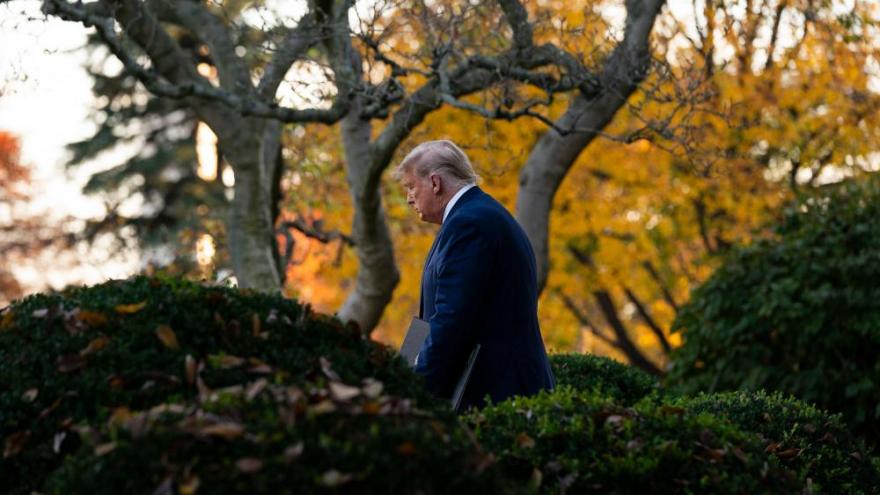 President Donald Trump for the first time on Nov. 15 acknowledged President-elect Joe Biden's victory while falsely blaming his loss on a string of baseless conspiracy theories.

(CNN) -- President Donald Trump acknowledged for the first time on Sunday that Joe Biden won the presidential election, but the President refused to concede and blamed his loss on a string of conspiracy theories.

Most news networks declared Biden the victor more than a week ago. Since the call was made, Biden has given a victory speech and gotten his transition team up and running. But Trump, who had questioned the validity of the election before votes had even been cast, is continuing to dig in his heels on unsupported legal challenges lodged by his allies over vote counts in several states and asserting that the fight has only begun.

"He won because the Election was Rigged," Trump said in one Sunday morning tweet. In another, he stood by his false belief he may be able to win the election and refused to concede, writing, "I concede NOTHING! We have a long way to go."

Trump also continued to blame his loss on debunked theories about the 2020 election in a series of posts flagged by Twitter for their disputed information.

The tweets from Trump followed a Saturday spent golfing and tweeting similar false conspiracy theories, and driving by a crowd of his supporters who gathered in Washington, DC, to protest the election results on the basis of his lies and propaganda.

Since Biden declared victory last week, the President has spent little time in front of cameras and essentially no time answering questions from reporters he doesn't perceive as allies. But on Twitter this weekend, the President launched baseless conspiracy theories and false statements to his nearly 90 million followers online.

Trump has repeatedly claimed without evidence that his chance at a second term in office was stolen from him with corrupt votes. A previous fact check by CNN of claims by a handful of prominent Republicans, including members of Trump's family and supporters like former House Speaker Newt Gingrich and former acting Director of National Intelligence Richard Grenell, of dead people voting in Michigan fell apart under scrutiny. A CNN analysis of the claim and the purported backing for it did not find a single instance of that happening.

Biden reached more than 270 electoral votes after his win in Pennsylvania. The Democrat now has 306 electoral votes to Trump's 232 as a result of wins in two longtime Republican states, Arizona and Georgia, CNN projects -- far above the 270 threshold that Biden needed to clinch the presidency.

Trump's former national security adviser, John Bolton, said Sunday that he thinks the President is "stunned" by his loss.

"I think he's stunned by it. I think that's why he's been silent really for so long. He's lived in his own dream world and been successful at it these last four years," Bolton told CNN's Fareed Zakaria. "The coronavirus was one tragic reality that he couldn't deal with. His own election loss is, in his mind, another tragic reality now. So I think he's now trying to calibrate, if in fact I've lost, how do I maximize my brand in the days after the coming inauguration of Joe Biden? And I think that's what's at stake now."

"I accept it as a further confirmation of the reality that Joe Biden won the election -- and not through any of the rest of that tweet, not through fraud or anything else the President is baselessly alleging. He won because he got more votes, OK, that's why he won," Klain said during an interview on NBC's "Meet the Press." "He got more votes in the popular vote by a lot, and he won the same number of electoral votes that President Trump himself called a landslide four years ago. But look, if the President is prepared to begin to recognize that reality, that's positive. Donald Trump's Twitter feed doesn't make Joe Biden president or not president. The American people did that."

Vermont Sen. Bernie Sanders told CNN's Jake Tapper on "State of the Union" on Sunday that he is worried "less and less" about Trump trying to stay in power past January 20 because "as more and more victories, state by state are confirmed for Biden, I think public support in any way, shape or form for the President is now going down."

However, Sanders told Tapper that it's "beyond belief" that the President "continues to deny reality."

"Trump will have the distinction of doing more than any person in the history of this country in undermining American democracy," Sanders added. "The idea that he continues to tell his supporters that the only reason he may have lost this election is because of fraud is an absolutely disgraceful, un-American thing to do."

And Ohio Republican Governor Mike DeWine told Tapper on the same program that though the President "has every right to go into court," the Trump administration should begin the formal transition process for Biden's succession.

"It's clear, that certainly based on what we know now, that Joe Biden is the President-elect and that transition, for the country's sake, it's important for a normal transition to start through," DeWine said. "And the President could go on his other track, his legal track. We should respect that, but we also need to begin that process."