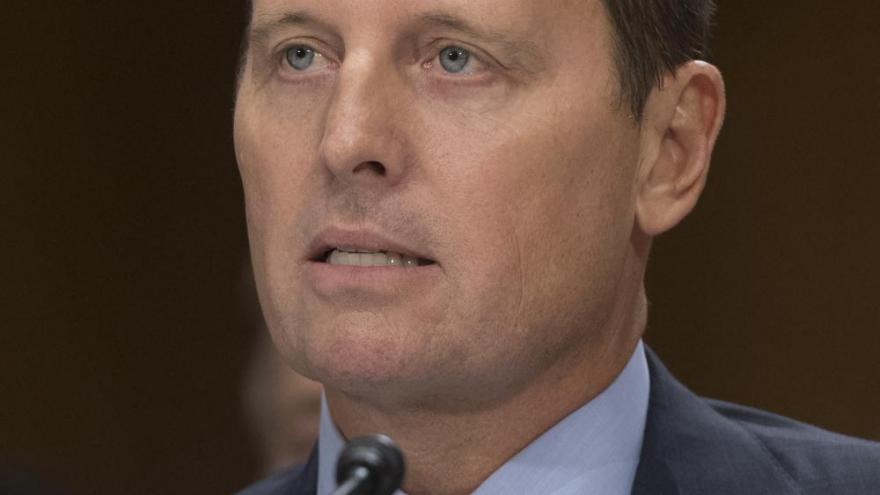 President Donald Trump is expected to name US Ambassador to Germany Richard Grenell as the next acting director of national intelligence, according to two sources familiar with the decision.

"I am pleased to announce that our highly respected Ambassador to Germany, @RichardGrenell, will become the Acting Director of National Intelligence. Rick has represented our Country exceedingly well and I look forward to working with him," Trump tweeted.

Trump also thanked outgoing acting director Joseph Maguire "for the wonderful job he has done, and we look forward to working with him closely, perhaps in another capacity within the Administration!"

News of the pick, which was first reported by the New York Times, comes as Trump faces a March 11 deadline to nominate a new director of national intelligence or name a new acting spy chief as federal law prevents Maguire from serving beyond that date.

Grenell will retain his ambassadorship to Germany while he is acting DNI, according to a senior administration official.

Even in an acting role, Grenell's lack of intelligence-related experience is likely to unsettle the US intelligence community, which has endured repeated attacks from the President since his 2016 election win over the Russia investigation and later the whistleblower complaint that gave way to the Ukraine impeachment inquiry, which made Trump just the third president in American history to be impeached.

But it does not appear that Trump is looking for someone with deep intelligence experience in the role -- a former senior White House official described Trump's decision as "filling the gaps" following the impeachment acquittal, sensing disloyalty in Maguire, and filling that position with somebody he sees as sufficiently loyal. Trump is "looking for a 'political' who will have his back," the former official said.

However, the move is raising concerns even among Trump allies who have been quick to point out that Grenell's primary qualification appears to be his loyalty to the President.

One source close to Trump told CNN they were surprised by the pick, noting Grenell has zero intelligence-related experience.

And another Trump adviser described Grenell as "out of his league" for the acting DNI job, adding that some in the administration are "embarrassed by his behavior." Previous holders of the DNI job have served in the intelligence community, the US Senate and senior levels of the military. Grenell, on the other hand, does not boast a resume with similar credentials despite his stint as the US ambassador to Germany.

"Everybody came into (the DNI job) with a relevant understanding, of which this guy has none," said Bob Litt, former ODNI general counsel, who called the move "extremely dangerous."

"This is a President who has loathed and feared the (intelligence community) since before he was inaugurated and he views them as a deep state hostile to him seeking to undercut him and he'll seek to undercut them," he said. "Clearly the important thing here is the President feels Grenell will do his bidding."

Not expected to be nominated for full-time job

Grenell, also a former Fox News contributor, is not expected to be nominated for the full-time director position, which would require Senate confirmation.

On Thursday morning he reaffirmed the fact that he will only be serving in the role on a temporary basis, tweeting that "The President will announce the Nominee (not me) sometime soon."

Grenell's track record as US ambassador to Germany has also raised concerns, even among some Republicans. He is expected to last only a matter of months, sources familiar with the situation said. Grenell will hold the position for roughly 90 days, one of the sources said, and he took the job under that understanding. Trump in theory could use the time to continue searching for a permanent DNI to nominate.

"This is just a brief thing," the source said.

"Some Republicans are outraged with the job he has done as ambassador, there is no way he could get confirmed," a source familiar with the move said.

Another Hill source told CNN Grenell "couldn't be confirmed" for the permanent position.

The vote to confirm him as ambassador was 56-42 and it was contentious. The fact that he is seen as a Trump loyalist would have been a problem for confirmation, even for Republicans who acknowledge that in that job having the backbone to stand up to the President is seen as a positive.

But the move allows Trump to fill the job for the time being with a loyalist while he figures out a long term solution.

Asked about the move, a ODNI spokesperson would only offer a short statement and referred CNN to the White House.

"Joe Maguire is honored to serve as Acting Director of National Intelligence and to lead the women and men of the Intelligence Community until the White House names a new Acting DNI or a nominee is confirmed. We refer you to the White House for further questions about the status of the DNI role," the spokesperson said.

Before it became clear that he was going become the acting director of national intelligence, Grenell was itching to get back to Washington and there had been discussions about him joining the Trump campaign in some capacity, the sources said.

Though a senior administration official told CNN Grenell would retain his ambassadorship while serving as acting DNI.

Trump has long viewed Grenell's responsibilities going well beyond Germany and gave him wide leeway in his duties. He's frequently praised his television appearances and tweets, telling one adviser he was his "favorite ambassador."

One Western official said Grenell's style of diplomacy took "a lot of getting used to" when he arrived in Berlin.

German officials have admitted it was rocky from the start, and the Western official said there was a general view that Grenell was seeking to advance his own standing in the administration while he was ambassador.

One Trump adviser told CNN that despite being a loyalist, Grenell has his detractors inside the administration He also has a long history of sharp elbows and controversial statements both on TV and on social media.

"Unreal," the adviser said in response to Grenell's rise to the acting director position.

Sen. Mark Warner, the top Democrat on the Senate Intelligence Committee, wrote in a statement Wednesday that Trump "has selected an individual without any intelligence experience to serve as the leader of the nation's intelligence community in an acting capacity."

"The President has selected an individual without any intelligence experience to serve as the leader of the nation's intelligence community in an acting capacity," he wrote.

"This is the second acting director the President has named to the role since the resignation of Dan Coats this summer, apparently in an effort to sidestep the Senate's constitutional obligation to advise and consent on such critical national security positions, and flouting the clear intent of Congress when it established the Office of the Director of National Intelligence in 2004," Warner added.

A spokesperson for Sen. Richard Burr, the North Carolina Republican who chairs the intelligence committee, declined to comment.

Last year, Trump was forced to quickly backtrack after announcing his intent to nominate another loyalist, Republican Rep. John Ratcliffe, to replace Coats as DNI.

It quickly became apparent in the days after that announcement that Ratcliffe's nomination was in serious trouble even as the President continued to defend him publicly.

Even after the fact, Trump blamed the press for Ratcliffe's downfall even though he nominated a lawmaker with minimal national security experience to one of the most sensitive jobs in government.