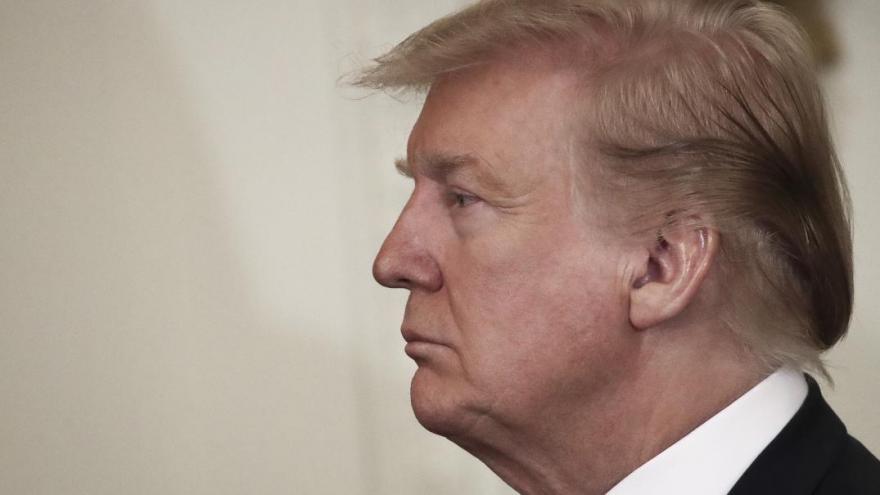 All living former Presidents Jimmy Carter, Bill Clinton, George W. Bush, Barack Obama and their respective former first ladies -- with the exception of the Trumps -- urge Americans to get vaccinated in a new ad campaign.

(CNN) -- When President Donald Trump received his Covid-19 vaccine at the White House in January, it was not recorded by official photographers or videographers, according to a person familiar with the matter, who said it wasn't clear there was any photographic documentation of the moment.

That alone would have made it difficult for Trump to be included in the public service announcement of all living former presidents and their wives receiving vaccine shots.

Discussions about Trump being involved in the spot never gained traction given his estrangement from the Presidents Club at the end of his term and the bitter way in which he departed Washington on Inauguration Day, people familiar with the matter said.

It was a conversation on that January day between former Presidents Bill Clinton, George W. Bush and Barack Obama that formed the basis of the vaccination campaign, which debuted Thursday. Because Trump made the decision to not join his predecessors in that historic moment, a person close to the project said, he wasn't asked to be involved in the public service announcement.

Trump expressed little interest in joining his predecessors to promote the vaccine, and the team that organized the PSA did not view it as likely that the 45th president would participate, leaving little opening for his inclusion.

"He has made no signals of wanting to be included in these types of moments," an aide to a former president told CNN.

A host of reasons

There does not appear to be one single reason for Trump's exclusion, one person involved in the production said, but rather a sense that his participation was never a real possibility.

A spokesperson for the Ad Council, which produced the spot, said it "was something that was started with the former presidents while President Trump was still in office" when asked why Trump wasn't included.

Spokespeople for Trump did not respond to questions about why he wasn't involved.

When he was in office, Trump administration officials discussed how and when he might receive a coronavirus vaccine, including the prospect of doing it on-camera. Yet Trump himself did not appear particularly eager to be seen getting the vaccine, one person familiar with the situation said, even though he was touting its development and wanted to take credit for it.

A former Trump administration official said the former President was also highly sensitive to his image after being hospitalized with Covid and did not appear receptive to any photo-op that could put his health and fitness on display again.

There was also discussion at the time of Ivanka Trump receiving the shot publicly, an idea that did not come to fruition, either. Instead, Vice President Mike Pence and his wife Karen Pence were the highest-profile Trump administration officials to be seen getting the shot.

Both Trump and former first lady Melania Trump received the coronavirus vaccine in January at the White House but did not publicize the fact until weeks after they had left Washington. On Wednesday, before the ad was published, Trump put out a statement claiming credit for the vaccine.

In the spots, the former presidents describe what they have missed during the pandemic and why they want to be vaccinated. Clinton says he wants to "go back to work" and to "be able to move around." Obama says he misses visiting his mother-in-law and says he wants to "hug her and see her on her birthday." And Bush says he is "really looking forward to going to Opening Day in Texas Rangers Stadium with the full stadium."

Former President Jimmy Carter does not speak on camera, but the 96-year-old Democrat says during the spot that he is getting vaccinated "because we want this pandemic to end as soon as possible."

The ad ends with all four former presidents urging Americans to get the vaccine as images of Jimmy and Rosalynn Carter, Barack and Michelle Obama, George and Laura Bush and Bill and Hillary Clinton all getting their vaccines are shown.

Trump was asked almost a year ago whether he would consult with former presidents about how to handle the pandemic, a once-common practice for presidents facing large-scale crises.

"I think we're doing an incredible job. So I don't want to disturb them, bother them," he said at a White House coronavirus task force briefing. "I don't think I'm going to learn much and, you know, I guess you could say that there's probably a natural inclination not to call."

The answer was hardly a surprise. Trump made little attempt to disguise his dislike for his predecessors when in office, including going as far as removing portraits of Clinton and Bush from their prominent location in the White House foyer and moving them to an out-of-the-way room used for storage.

Those portraits have been moved back to their original location under Biden, who has demonstrated a desire to cultivate a more functional relationship with his predecessors. He said during a CNN town hall earlier this year that he'd spoken to all living former presidents except one -- presumably Trump, though he didn't name him.

"All of them have, with one exception, picked up the phone and called me," he told Anderson Cooper.

Those types of consultations were mostly absent during Trump's tenure, who spoke rarely -- if ever -- with the men who held office before him. The one time the group all came together, for the funeral of former President George H.W. Bush at the National Cathedral in Washington, it was a somewhat frigid reception.

Trump broke precedent further by boycotting Biden's inauguration, choosing instead to depart Washington on the morning of January 20 with a ceremony at Joint Base Andrews.

He did leave a note for Biden, which the President described as "very generous," but otherwise has been harshly critical of his successor in statements blasted out from his Florida headquarters.