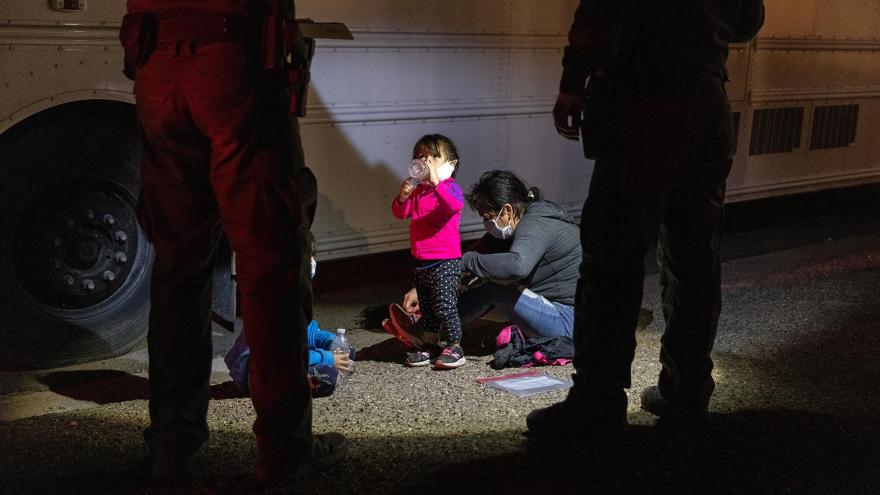 President Joe Biden came into office pledging to reverse a slew of Trump-era policies that had restricted immigration to the United States. But for months, Biden officials have relied on an unprecedented Trump policy put in place at the US southern border that's led to half a million migrants being swiftly sent back to Mexico or to their home countries since its implementation.

(CNN) -- President Joe Biden came into office pledging to reverse a slew of Trump-era policies that had restricted immigration to the United States. But for months, Biden officials have relied on an unprecedented Trump policy put in place at the US southern border that's led to half a million migrants being swiftly sent back to Mexico or to their home countries since its implementation.

The future of the policy, implemented during the coronavirus pandemic, is uncertain as pandemic restrictions ease nationwide and litigation over the policy continues, however.

Officials have increasingly depended on the pandemic-related policy to manage migrant arrivals at the border, fueling concern over whether the US could see another influx of migrants if it were reversed.

The policy dates back to March 2020, when the Trump administration invoked a public health authority known as Title 42 that allowed border officials to turn back migrants encountered at the US-Mexico border, a move that in effect sealed off the border. Public health officials, at the time, suspected political motivations behind the decision.

Despite concerns over the legitimacy of the policy to protect public health, the Biden administration kept it in place and defended its use. "The only people we're not going to let sitting there on the other side of the Rio Grande by themselves with no help are children," Biden said in his first news conference.

The public health order remains the subject of litigation. Since February, plaintiffs in a case concerning families being subject to the order have been in negotiations with the government.

While an increasing number of migrants have already arrived at the US southern border in recent months, the vast majority have been quickly expelled. Unaccompanied minors, though, were exempt and as a result, admitted to the US, quickly overwhelming government resources at a time when the federal government wasn't prepared to take them on.

Republicans seized on Biden's handling of the influx amid images of overcrowded border facilities, criticizing the administration's actions and urging him to keep the Trump-era pandemic policy in place.

Administration officials, meanwhile, have not indicated when the policy will be reversed, but behind the scenes, the Department of Homeland Security is preparing for the possibility.

US Customs and Border Protection has been running scenarios of what happens if the public health order ends, according to two Homeland Security officials. The administration has also been engaging with immigrant advocacy groups, who have been critical of the pandemic-related rule and its use, according to a source familiar with the discussions.

Some exceptions have been made to the policy, including exempting 35 families daily who are referred by the American Civil Liberties Union to be admitted to the United States.

"We are pleased that we have been able to get so many vulnerable families in through the exemption process, but ultimately that's not sufficient and we remain troubled by the lack of a timeline to get rid of Title 42, which we have always believed -- and even more so -- to not just be justified on public health grounds," said Lee Gelernt, lead attorney in the litigation over the public health order.

The administration's ability to use the policy has been limited along part of the border, where Mexico was unable to accommodate returns, prompting an ad hoc system in which some families would be flown elsewhere on the border and others released into the US.

A Homeland Security spokesperson told CNN that the administration is working to streamline a system of identifying and processing vulnerable individuals who warrant humanitarian exceptions under the order.

"This humanitarian exception process involves close coordination with international and nongovernmental organizations in Mexico and Covid-19 testing before those identified through this process are allowed to enter the country," the spokesperson said.

The number of humanitarian exceptions, particularly for families, appears to have increased under the Biden administration, according to preliminary Customs and Border Protection data obtained by CNN. Nearly 1,600 family members were processed for entry into the US at the ports along the southern border from April 1 to 28. That's up from 620 people during the prior four weeks, the data shows.

Homeland Security Secretary Alejandro Mayorkas said last week that the timeline to end the administration's reliance on rapid border expulsions is "as quickly as possible," though he did not provide a deadline. Mayorkas also acknowledged that some of the pressure to end the use of Title 42 comes from the ongoing lawsuit.

Officials conceded the policy has helped the administration manage the influx of migrants crossing the border amid the pandemic.

"Our plan at the border is tied to the pandemic, but also tied to our more comprehensive plan to manage migration, as I said, from the region all the way up to the Southwest border," Andrea Flores, director for transborder security at the National Security Council, told reporters last month.

'Quite necessary but also quite convenient'

The administration understands that given the policies it put in place, Title 42 is "not only quite necessary but also quite convenient right now," a DHS official told CNN.

The official argued the situation at the border would be worse without the policy, pointing to the migrant influx over the past several months, which left thousands of people languishing in border facilities, strained resources and hurt morale among Border Patrol agents.

"If we didn't have it," the official said, "it would be a very, very stark situation." But the official noted that "the courts may be the ones who dictate" the policy's fate, regardless of what the administration would prefer.

Some lawmakers are wary of undoing the policy too quickly.

"Title 42 is helping, but if this President takes that away, then it opens the floodgates even more so," Republican Rep. Yvette Herrell of New Mexico said during a news conference earlier this year.

Democratic Rep. Henry Cuellar of Texas said he supports the use of the health order for now. "Imagine if we would allow the single adults, which are the largest amount of people coming in, to come into the United States. Yes, I support Title 42. Yes, I understand there's a lawsuit that is questioning whether this is the right thing to do," he said.

"Sometime when things get better in the pandemic, then a decision will have to be made whether you keep Title 42 or when you get rid of it," he added.

But experts, immigrant advocates and attorneys have questioned the effectiveness of the public health order.

"Title 42 is gradually becoming less effective as a deterrent and more problematic on questions of rights and procedures," said Andrew Selee, president of the Migration Policy Institute.

"They view everything through the lens of border management," said Jennifer Quigley, senior director for government affairs at Human Rights First. "They feel like we have the kids' situation under control, so let's not completely lift Title 42. Let's tinker with it, so that we have small numbers come in."

A recently released Human Rights First report found many of those expelled have been put in harm's way and continue to face danger in Mexico or their home countries.