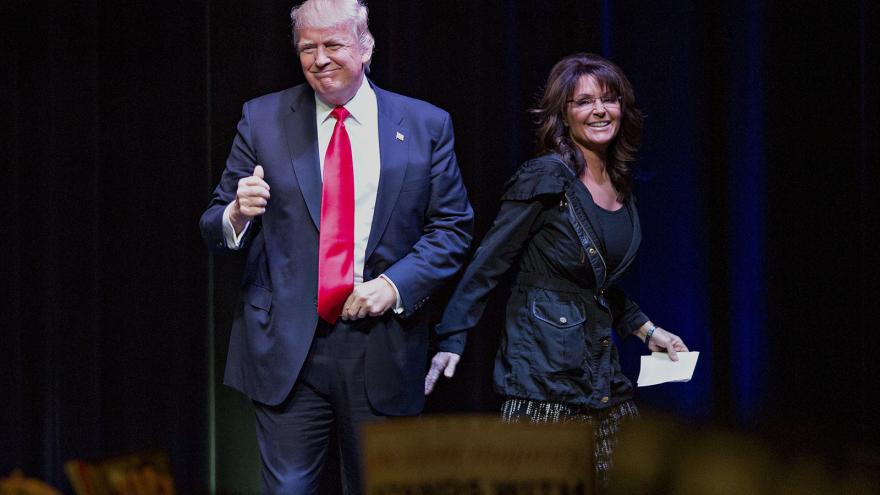 "Sarah shocked many when she endorsed me very early in 2016, and we won big," Trump said in a statement released Sunday. "Now it's my turn!"

Palin, a conservative firebrand who announced her campaign last week, joins a crowded field of more than 40 candidates who are vying for the seat in a special election, but Trump's endorsement has the potential to significantly boost her chances.

In his statement, Trump also hit the 2008 presidential campaign of his former rival, the late GOP Sen. John McCain of Arizona, who had tapped Palin as his running mate.

"Sarah lifted the McCain presidential campaign out of the dumps despite the fact that she had to endure some very evil, stupid, and jealous people within the campaign itself. They were out to destroy her, but she didn't let that happen," Trump said. "I am proud to give her my Complete and Total Endorsement, and encourage all Republicans to united behind this wonderful person and her campaign to put America First!"

A special primary for Alaska's lone US House seat will take place June 11, and the special general election will be held on August 16, the same day as Alaska's statewide primary.

Although she is years removed from her last electoral bid, Palin enters the race as a household name in the state. Since running for vice president, Palin has not sought any other elected office, even as the party has moved more toward the rhetoric that made her stand out as a vice presidential pick.