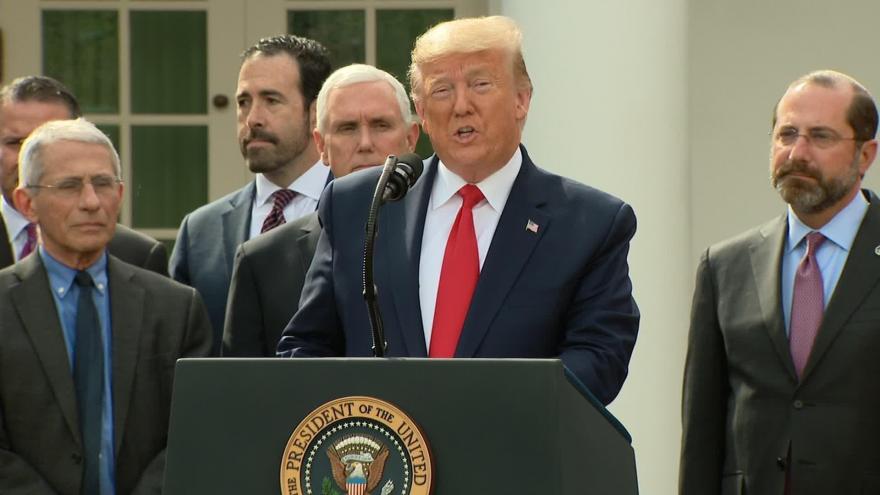 (CNN) -- President Donald Trump said Friday he was declaring a national emergency -- "two very big words" -- to free up $50 billion in federal resources to combat coronavirus even as he refused to take personal responsibility for administration failures early in the outbreak.

The announcement was part of a raft of new measures Trump hopes can bring a roiling health crisis under control after a week of market seesaws and major disruptions to everyday life.

As he sought to project an air of competence, Trump denied there were missteps that some health experts say have aggravated the crisis.

"I don't take responsibility at all," he said, insisting problems that led to slow test-kit distribution were the fault of previous administrations. "We were given a set of circumstances and we were given rules, regulations and specifications from a different time."

Speaking during an afternoon Rose Garden event, Trump gathered American retail executives to announce they were donating resources to institute drive-through testing at locations across the country, collected on a new online portal that he said would available on Sunday evening.

Later Friday evening, however, the companies indicated they had few details on how many tests they could offer or when the test kits would be available. And Google -- the company Trump said was developing the online platform -- said it was not publishing a national-scale website; a health-based subsidiary of Google's parent company, Alphabet, is launching a small-scale website to begin triaging California-based patients only.

Trump went on to say he was allowing his health secretary to bypass certain regulations to provide more flexibility to doctors and hospitals responding to the outbreak.

And he announced he was waiving interest on student loans and purchasing more crude oil for the US strategic reserve to fill it "right to the top."

After a widely derided prime-time address on Wednesday that preceded a historic plunge in stocks, Trump faced pressure to demonstrate a handle on the crisis. Unlike that address, which framed the virus as a foreign threat, Friday's statement pointed to a full-blown domestic crisis requiring massive federal resources.

He said the emergency action would "unleash the full power of the federal government" and called on Americans to band together in a time of national strain.

"Through a very collective action and shared sacrifice, national determination, we will overcome the threat of the virus," he said.

But Trump's own words at times belied a sense of political unity. He blamed Democrats for not bending enough in negotiations over a legislative package to combat coronavirus and he accused past administrations -- misleadingly -- of hampering his ability to confront the virus.

The delays in testing, however, have come under Trump's watch and even Dr. Anthony Fauci, the nation's top infectious disease specialist, said this week the situation amounted to a "failing."

Trump on Friday also claimed to lack any knowledge that a pandemic control group within his own National Security Council was disbanded under his watch, calling a question on the topic "nasty."

The National Security Council's global health directorate was folded into other areas of the council in 2018.

Even as he was announcing a scaling up of testing capacity for coronavirus, the President said Friday he did not believe all Americans should rush to be tested.

"We don't want people to take a test if we feel that they shouldn't be doing it. And we don't want everybody running out and taking -- only if you have certain symptoms," he said in the Rose Garden.

One person he did suggest would take a test was himself, saying it was likely he would receive one "fairly soon," after he recently came into contact with a Brazilian official who later tested positive.

If that encounter startled Trump into taking more protective actions to prevent himself from contracting or spreading the virus, however, it was not in evidence on Friday. During his event Trump shook hands with nearly every retail executive who came to his podium to speak, ceasing only when the final participant offered an elbow bump instead.

The President, who began his remarks by giving himself plaudits for his response to the outbreak, still appeared to believe the spread could be limited even as he also suggested it would worsen before eventually improving.

"It could get worse. The next eight weeks are critical," Trump said. "Some of the doctors say it will wash through, it will flow through. Interesting terms."

Trump has been under pressure to take more decisive action as the virus begins altering everyday life for nearly every American.

On Thursday, CNN reported that the President had decided to make the emergency declaration but that it was undergoing legal review at the White House.

Washington Gov. Jay Inslee, a Democrat, spoke to Vice President Mike Pence on Thursday and requested that the Trump administration declare an emergency to provide vital assistance to states such as Inslee's that are on the front lines of the coronavirus crisis, a Washington state official told CNN.

The official told CNN they are "hopeful that (Friday's) announcement will provide the kinds of assistance that the governor requested."

White House aides have been weighing the move for the past several days as a way to provide more resources for combating the coronavirus outbreak. Trump has also been debating whether to support a legislative package to combat the outbreak negotiated by House Speaker Nancy Pelosi and his treasury secretary Steven Mnuchin.

Trump signaled in the Rose Garden that he does not currently support the House Democrats' coronavirus bill, which would -- among other things -- provide paid leave to Americans who can't go to work during the pandemic.

The emergency declaration would free up funding and allow the Federal Emergency Management Agency to head certain aspects of the outbreak response.