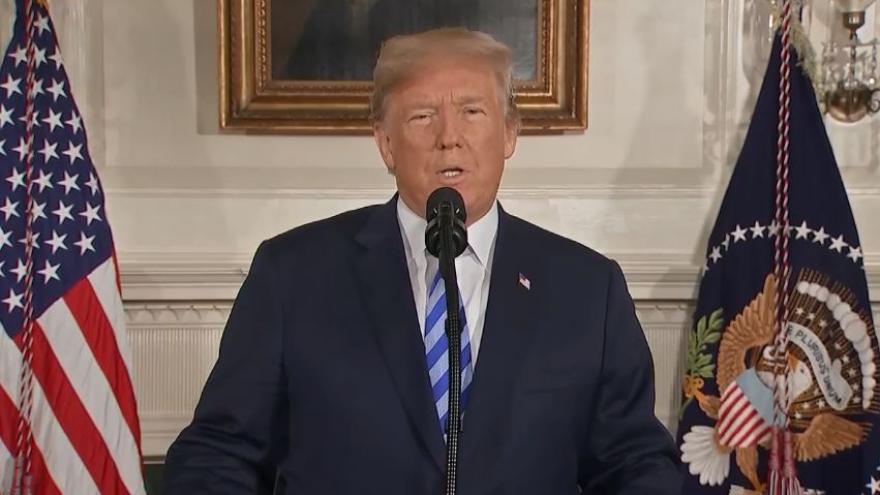 President Donald Trump says "great things" can happen for the Iranian people following his announcement that the U.S. was withdrawing from a global nuclear agreement.

Trump predicted Tuesday that Iranians would someday "want to make a new and lasting deal" and that "when they do, I am ready, willing and able."

He added that a new deal could lead to the "peace and stability we all want in the Middle East."

Trump was speaking from the White House when he denounced the previous Iran deal as "defective at its core."

Despite lobbying from European allies, Trump moved forward with his campaign promise to pull out of the President Barack Obama-era agreement.

The Iranians have been sharply critical of the Republican president's plan to withdraw.

President Donald Trump says the United States is withdrawing from the Iran nuclear deal, which he is calling "defective at its core."

Trump on Tuesday signed a presidential memorandum withdrawing from the 2015 agreement and he is planning to reinstall sanctions on the Iranian regime. He says in an address to the nation that he will be reinstituting the highest level of sanctions and warning any country not to help the Iranian government.

Trump says America "will not be held hostage to nuclear blackmail" and will not allow "a regime that chants 'Death to America'" to get access to nuclear weapons.

The president says he made the decision after consulting with U.S. allies.

President Donald Trump is railing against the Iran nuclear agreement as "a horrible, one-sided deal" based on a lie.

Trump's comments Tuesday come as he announces plans to follow through on his campaign threat to pull out of the landmark nuclear accord with Iran during a televised address at the White House.

Trump says that if he allowed the deal to stand, there would soon be a nuclear arms race.

He also says a constructive deal could easily have been struck at the time, but it wasn't.

Trump is calling Iran a "regime of great terror."

And he says that "no action taken by the regime has been more dangerous than its pursuit of nuclear weapons and the means of delivering them."

Israel's military says forces are on high alert and is urging civilians in the Golan Heights near Syria to prepare bomb shelters.

The military directive Tuesday came "following the identification of irregular activity of Iranian forces in Syria." It said defense systems have been deployed.

The statement came as President Donald Trump was set to announce Tuesday whether the U.S. will exit the 2015 agreement between Iran and world powers.

The possibility of the nuclear deal collapsing has raised concerns it might embolden Iran to strike Israeli targets.

Israel is believed to have been behind recent airstrikes on military bases in Syria that killed Iranian soldiers, prompting Tehran to vow retaliation. Israel has neither confirmed nor denied involvement. It has warned it will not tolerate archenemy Iran establishing itself militarily on its doorstep.

Iran's state-run news agency is quoting an anonymous official saying President Hassan Rouhani (hah-SAHN' roh-HAH'-nee) will give a televised address after President Donald Trump announces his intention to pull America out of the Iran nuclear deal.

IRNA offered no other immediate details.

President Donald Trump is following through on his campaign threat and withdrawing the U.S. from the landmark nuclear accord with Iran.

That's according to two people familiar with the decision, who spoke on condition of anonymity because they were not authorized to speak on the record. They did not have any details on how the withdrawal would unfold.

Trump is expected to make the announcement Tuesday afternoon.

It wasn't immediately clear which sanctions lifted under the deal that Trump plans to immediately re-impose. He has several options. A more limited move could leave Trump more room to potentially stay in the deal if other members agree to toughen it.

The president has long criticized the 2015 agreement, which lifted most U.S. and international sanctions against the country. In return, Iran agreed to restrictions on its nuclear program making it impossible to produce a bomb, along with rigorous inspections.

The decision deals a profound blow to some of America's closest allies — including Britain, France and Germany, who joined the U.S. only three years ago to sign the deal.