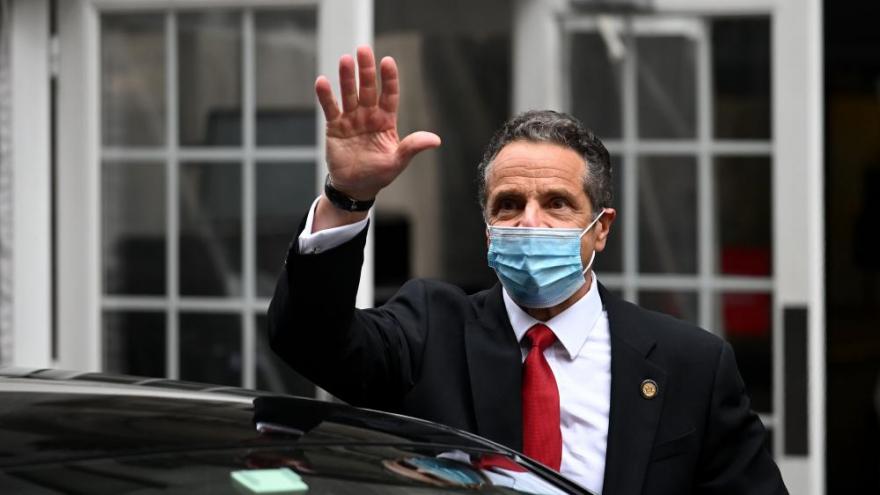 Governor of New York Andrew Cuomo leaves after ringing the opening bell at the New York Stock Exchange (NYSE) on May 26, 2020 at Wall Street in New York City.

"I am going to go to Washington tomorrow, scheduled to meet with the President to talk about a number of things," Cuomo said during his daily press briefing.

Cuomo outlined several infrastructure project he'd like his state to tackle in partnership with the federal government, including a new Penn Station, a train link to LaGuardia Airport, rebuilding train tunnels under the Hudson, and expanding the Second Avenue subway.

"The time to do this work is now when you need the jobs and the volume is low and New York will lead the way. We are going to accelerate our big infrastructure programs," Cuomo said, adding, "This is one of the things I want to talk to the President about."

Trump has expressed openness to infrastructure projects amid the coronavirus pandemic, telling Fox News during a town hall earlier this month, "Infrastructure is very important. It's also important to the Democrats, by the way. That's something we actually do get along."

This will be the third time Trump and Cuomo, who have known each other for years and have a hot-and-cold relationship, have met at the White House this year, along with numerous phone calls. In February, they met over an escalated proxy battle over immigration and the Trusted Traveler Program. And in April, the leaders met to discuss coronavirus testing.

In between, they've alternated between trading compliments and tossing verbal grenades at each other through the press.

The meeting also comes as Trump continues to seek credit for the federal handling of the coronavirus response as the nation's governors enjoy high approval ratings.

"We made most Governors look very good, even great, by getting them the Ventilators, unlimited Testing, and supplies, all of which they should have had in their own stockpiles. So they look great, and I just keep rolling along, doing great things and getting Fake Lamestream News!" he tweeted Tuesday.