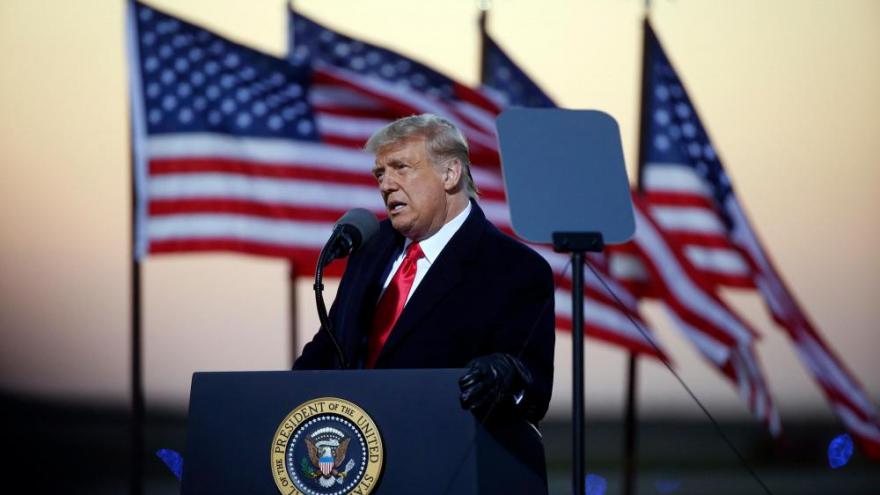 President Donald Trump harshly criticized strict lockdowns coming to some European countries to combat the coronavirus pandemic, claiming the restrictions are ineffective as cases surge both there and in the US.

(CNN) -- President Donald Trump on Sunday harshly criticized strict lockdowns coming to some European countries to combat the coronavirus pandemic, claiming the restrictions are ineffective as cases surge both there and in the US.

"Europe imposed draconian lockdowns and cases were surging and deaths were surging but think of it, draconian. Now they have to do it all over again. What the hell are they doing? I think I'll go over and explain it to them," Trump said at a rally in Michigan. "But they're locking down parts of Europe again."

The President went on to claim that places with strict lockdowns are where "the people that do the worst" with fighting the pandemic are.

The comments from the President come just one day after British Prime Minister Boris Johnson announced England will enter a second national lockdown in the coming days amid a sharp rise in infections there. Germany, Belgium, France and Greece have also imposed additional lockdown measures aimed at combating the rise in coronavirus cases in those countries.

The US is also seeing a surge in cases, with at least 31 states across the country having reported at least one record-high day of new Covid-19 cases in the past month, according to data from Johns Hopkins University.

Fifteen states reported their highest one-day tallies of Covid-19 deaths, while the country's seven-day average of new daily cases was 78,380 Saturday -- a number that has risen 128.2% since a post-summer-surge low on September 12.

Trump has been critical of lockdown measures in the past, urging governors to lift their restrictions earlier this year even as public health experts warned it was too early to scale them back. In one extraordinary move in April, the President called on residents in Michigan to "LIBERATE" their state from the Democratic governor's restrictions.

During the rally Sunday, Trump also repeated his false claim that Democratic presidential nominee Joe Biden's plan for coronavirus lockdowns is to "imprison you in your home."

Biden, however, has not expressed any desire for a lockdown. He said in an August interview that he would support a lockdown specifically in the event that scientists said a lockdown was necessary to deal with a virus crisis.

As Trump lashes out at the new restrictions in Europe, Dr. Anthony Fauci, the top US infectious disease expert, signaled this weekend that the US is "in for a whole lot of hurt" as the winter months grow closer.

"All the stars are aligned in the wrong place" as the country heads indoors in colder weather, Fauci told The Washington Post in an interview late Friday -- a day when the US set a global record for the most daily cases and the nation surpassed 229,000 deaths. "You could not possibly be positioned more poorly."