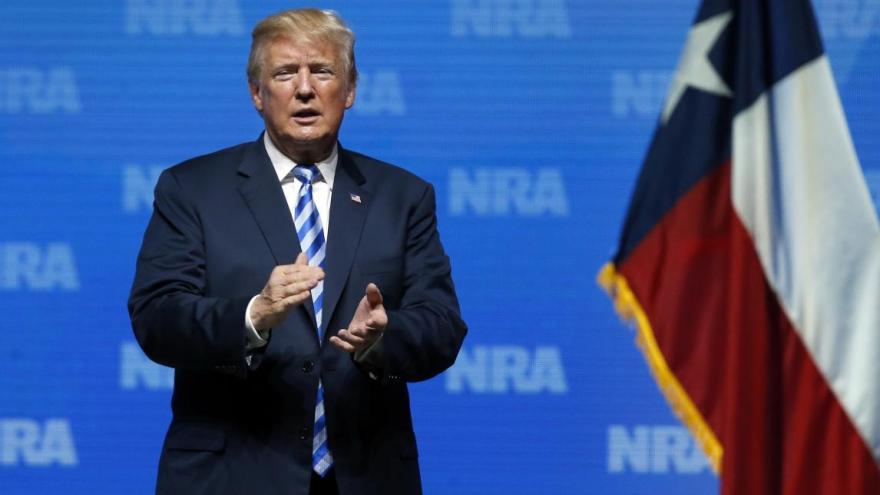 President Donald Trump has been cooling to the idea of supporting new legislation for stricter firearm background checks in recent conversations with lawmakers, congressional and Republican sources tell CNN.

(CNN) -- President Donald Trump has been cooling to the idea of supporting new legislation for stricter firearm background checks in recent conversations with lawmakers, congressional and Republican sources tell CNN.

Trump said Tuesday that though there are "very, very strong background checks" in place right now for gun purchases, there are still "missing areas."

"I'm not doing that to be cute," Trump told reporters in the Oval Office when asked whether he was dialing back his calls for expanded background checks in the wake of back-to-back mass shootings. "We have very, very strong background checks right now. But we have, sort of, missing areas, areas that don't complete the whole circle. And we're looking at different things, and I have to tell you that it is a mental problem."

After a week at his golf club in Bedminster, New Jersey, and with the conversation around Dayton and El Paso shrinking, Trump has -- at least publicly -- scaled back his emphasis on even modest reforms to the nation's gun laws. Instead, the President focused almost exclusively on the issue of mental health, which is a more palatable conversation among the President's base of supporters than imposing new hurdles to the purchase of firearms in the US.

Trump's shift away from background checks comes amid conversations with Republican Rep. Mark Meadows and Democratic Sen. Joe Manchin over the last week, as well as the National Rifle Association head Wayne LaPierre, the sources said.

LaPierre tweeted Tuesday afternoon that he "spoke to the president today. We discussed the best ways to prevent these types of tragedies." He added that Trump "is a strong #2A President and supports our Right to Keep and Bear Arms!"

A source familiar with the details of Tuesday's call between Trump and LaPierre said the President told LaPierre that universal background checks are "off the table." The phone call was first reported in The Atlantic.

A White House official had earlier denied Trump said universal background checks were off the table.

The White House has previously threatened to veto the universal background check legislation passed by the House in February.

Another source familiar with the ongoing gun control discussions said there are still conversations relating to background checks behind the scenes and the focus is on overhauling the background check process. The source said there is more of an emphasis on passing so-called "red flag" laws right now because the view is that it's more doable in the short term.

Red flag laws allow those who have seen warning signs to seek a court order to intervene and temporarily prevent someone who is in crisis from having access to a firearm.

The source says there are a lot of legislative proposals still being kicked around and that no decisions have been made.

Trump has also heard from his own team that expanding background checks is not going to play well with his base. Acting Office of Management and Budget Director Russ Vought is one strong opponent of background checks internally, two White House officials said, and he has expressed his opposition to Trump. His concerns, shared by many within the White House, is that a background check expansion would gain him few points politically but actively hurt him among his actual supporters.

Based on those conversations, among others with additional lawmakers, GOP officials believe Trump has now backed off of the idea of tightening the background check system for the moment.

But two White House officials maintain that Trump has not closed the door on new gun control legislation.

One Republican operative close to the White House said the issue is likely to reemerge when Congress returns from its recess in September, noting that some GOP lawmakers in swing districts are hearing from voters who want to see action on the gun issue.

"They are getting heat from constituents," the GOP operative said, though it's unclear which lawmakers have experienced such blow back.

There's been minimal movement by Republicans in support of increased gun control in the wake of the most recent massacres. Earlier this month New York GOP Rep. Peter King became the first Republican to sign onto an assault weapons ban. Texas Rep. Michael McCaul recently signaled his support for strengthening background checks, telling CNN Congress will act but needs to do so without "infringing on our constitutional rights."

"I think anybody that buys a gun should have a background check," he added.

But at an event in his district, none of the questions McCaul received from the 30 or so constituents in the audience were about guns.

Sen. Ron Johnson, R-Wisconsin, said Tuesday he doesn't think any of the gun legislation floated in the past two weeks is likely to pass. That assessment includes red flag laws -- rules that would allow officials to temporarily remove guns from people in crisis through a court order -- as well as strengthening background checks or mandatory gun buyback programs.

"All I can tell you is what I hear in Wisconsin. The debate really hasn't changed much at all," Johnson said. "People still ask the same questions. OK, if you propose some kind of gun legislation, first of all, how would that have prevented these tragedies in the past? How would they prevent them in the future?"