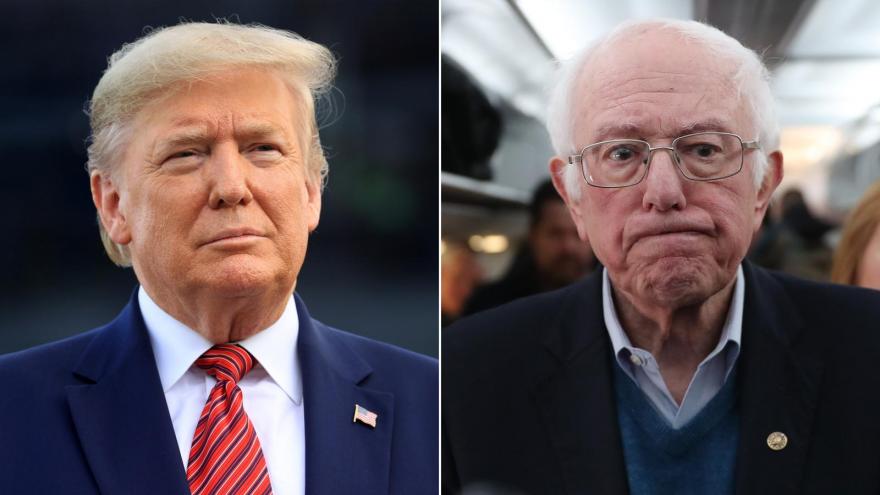 President Donald Trump congratulated Vermont Sen. Bernie Sanders on "a great win" in the Nevada caucuses, saying he hopes the Democratic presidential candidate is "treated fairly" during the nominating process.

(CNN) -- President Donald Trump on Sunday congratulated Vermont Sen. Bernie Sanders on "a great win" in the Nevada caucuses, saying he hopes the Democratic presidential candidate is "treated fairly" during the nominating process.

"So I think it was a great win for Bernie Sanders. We'll see how it all turns out. They've got a lot of winning to do," Trump said. "I hope they treat him fairly."

Speaking to reporters outside the White House before an official trip to India, Trump also said he hadn't been briefed on Russian efforts to help Sanders' presidential campaign as part of an effort to interfere with the Democratic contest, contradicting a White House official who previously told CNN that the President had been briefed on the matter.

"I read where Russia is helping Bernie Sanders. Nobody said it to me at all. Nobody briefed me about that at all ... I have not been briefed on that all," Trump told reporters.

CNN previously reported that the intelligence community's top election security official had delivered a briefing to lawmakers warning them that the intelligence community believes Russia is already taking steps to interfere in the 2020 election with the goal of helping Trump win at a time when Sanders is emerging as the Democratic front-runner, according to three sources familiar with the matter. It remains unclear how Russia is attempting to help Sanders, according to The Washington Post, which first reported that the Sanders campaign had been briefed on the effort.

At a rally in Las Vegas before the Post's report broke, Trump suggested Moscow would prefer Sanders to win, not him, making no mention of the fact he'd been briefed about the matter.

Speaking to reporters in Bakersfield, California, Friday afternoon, Sanders confirmed that his campaign was briefed about the Kremlin's efforts about a month ago and condemned Russia's attempts to interfere in US elections.

"It was not clear what role they're going to play. We were told that Russia, maybe other countries, are going to get involved in this campaign, and look, here's the message to Russia: Stay out of American elections," Sanders said.

CNN projected on Saturday that Sanders, a Vermont independent, will win the Nevada caucuses, showing the power of his organization and amplifying his argument that he can broaden his appeal across the Democratic electorate based on the results from the most diverse state in party's nominating contest so far.

Sanders dominated among Latinos and young voters, entrance polls showed. But he was broadly successful across demographic groups -- reaching parity with his rivals among moderate voters.

Still, Sanders is far from clinching the Democratic nomination. A second-place finish in Nevada could prevent Joe Biden's standing from further weakening this week in South Carolina, where the former vice president is hoping his support among black voters will carry his campaign to victory. And former New York City Mayor Michael Bloomberg's $434 million of television advertisements looms large on Super Tuesday, when 14 states vote on March 3.