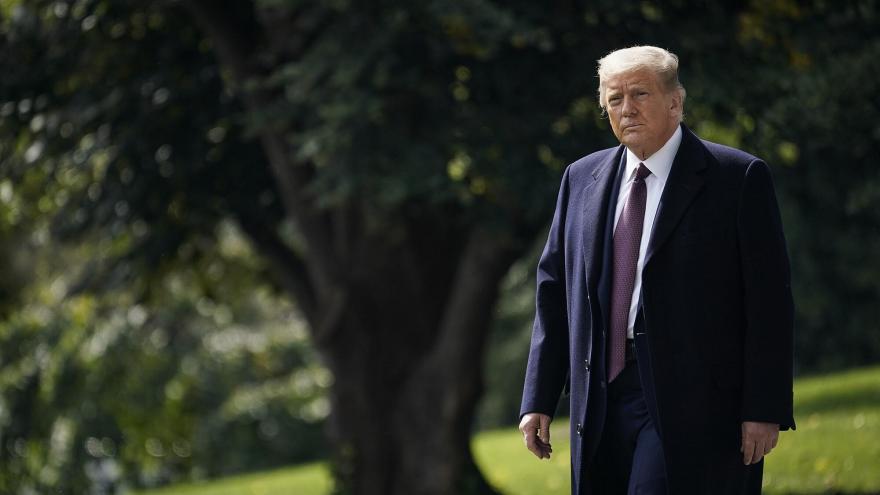 President Donald Trump condemned "all White supremacists" Thursday evening. In this image, Trump walks to Marine One on the South Lawn of the White House on October 1, 2020 in Washington, DC.

(CNN) -- President Donald Trump condemned "all White supremacists" Thursday evening after pointedly refusing to do so at Tuesday's presidential debate and in the days since.

The White House initially showed no signs of backing down from Trump's refusal to condemn White supremacists during Tuesday's debate, despite pleas from some Republican allies to clarify his comments.

Earlier Thursday, White House press secretary Kayleigh McEnany would not give a declarative statement denouncing White supremacists, instead pointing to the President's past comments and insisting that he had not misspoken during the debate or after.

"The President, specifically, verbatim, was asked (Wednesday): 'White supremacy -- do you denounce them?' To which he responded, 'I have always denounced any form of that,' " McEnany said. "Those are the facts."

But McEnany excluded the fact that when Trump was asked if he condemned White supremacists on Tuesday, he had appeared to equate violence by far-left groups with White supremacy.

During the debate, the President also told the Proud Boys -- a far-right group the Anti-Defamation League calls misogynistic, Islamophobic, transphobic and anti-immigration -- to "stand back and stand by."

"Who would you like me to condemn?" Trump said. Challenger Joe Biden could be heard twice saying, "Proud Boys."

Although Trump has reluctantly condemned the Ku Klux Klan and White supremacists in the past, he memorably said "both sides" were to blame for racial violence in Charlottesville, Virginia, has frequently downplayed the threat from White supremacists during his term in office and has made stoking racial tensions a key part of his reelection strategy.

In contrast, the Trump administration has portrayed antifa and anarchists as a top threat to the US equivalent to that of the KKK, recently making a campaign promise to prosecute both the KKK and antifa as terrorist organizations.

In reality, White supremacists will remain the most "persistent and lethal threat" in the United States through 2021, according to Department of Homeland Security draft documents.

The most recent draft report predicts an "elevated threat environment at least through" early next year, concluding that some US-based violent extremists have capitalized on increased social and political tensions in 2020.