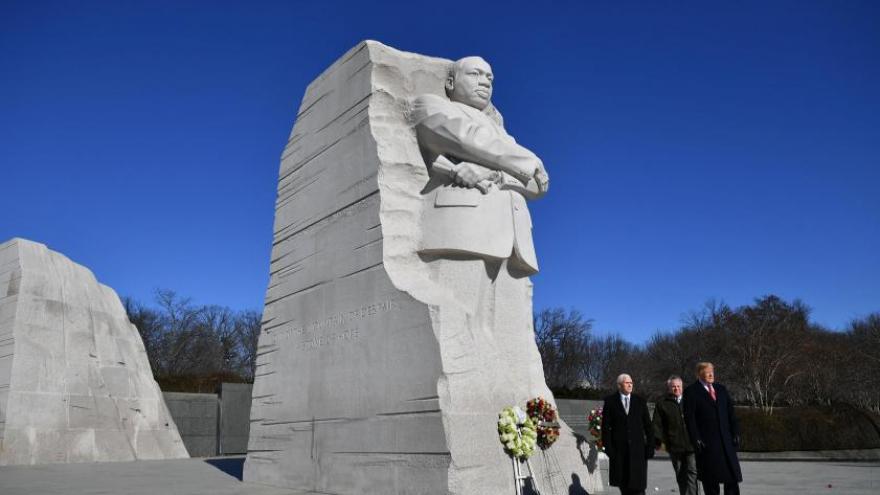 President Donald Trump made an unscheduled, unannounced trip to the Martin Luther King Jr. Memorial on the National Mall in recognition of the holiday honoring the civil rights icon.

(CNN) -- President Donald Trump on Monday made an unscheduled, unannounced trip to the Martin Luther King Jr. Memorial on the National Mall in recognition of the holiday honoring the civil rights icon.

Vice President Mike Pence joined the President on the brisk January afternoon, just a couple hours before Trump is set to depart the White House for a quick trip to Davos, Switzerland, to attend the World Economic Forum.

Earlier Monday, counselor to the president Kellyanne Conway told reporters in the briefing room that Trump "agrees with many of the things that Dr. Martin Luther King stood for and agreed with for many years, including unity and equality."

"When you see the articles of impeachment that came out, I don't think it was within Dr. King's vision to have Americans dragged through a process where the President is not going to be removed from office, is not being charged with bribery, extortion, high crimes or misdemeanors," she said. "And I think that anybody who cares about 'and justice for all' -- today or any day of the year -- will appreciate the fact that the President now will have a full throttle defense on the facts. And everybody should have that."

The President also tweeted on the occasion, tying the third anniversary of his inauguration to King's legacy.

"It was exactly three years ago today, January 20, 2017, that I was sworn into office. So appropriate that today is also MLK jr DAY. African-American Unemployment is the LOWEST in the history of our Country, by far. Also, best Poverty, Youth, and Employment numbers, ever. Great!" he wrote.

Last year, Trump also visited the memorial site. In 2018, he spent the holiday golfing near his Mar-a-Lago property in Florida. A day ahead of the 2018 holiday, the President declared that he was "not a racist" following reports alleging he had referred to Haiti and some African nations as "s**thole countries" in a closed-door meeting about immigration.

And days before taking office in 2017, Trump kicked off MLK weekend by zeroing-in on one of his frequent critics, civil rights activist and Georgia Democratic Rep. John Lewis. The Saturday ahead of the holiday, Trump tweeted that Lewis "should spend more time on fixing and helping his district, which is in horrible shape and falling apart (not to mention crime infested) rather than falsely complaining about the election results. All talk, talk, talk -- no action or results." That Monday, he met with Martin Luther King III at Trump Tower.

The last three presidents often took part in service projects to mark Martin Luther King Jr. Day. But Trump is not scheduled to participate in any service projects on the federal holiday that he and every other US president have designated as a "day of service" since 1994.

US presidents have typically observed the holiday publicly, making remarks or attending events honoring the day.