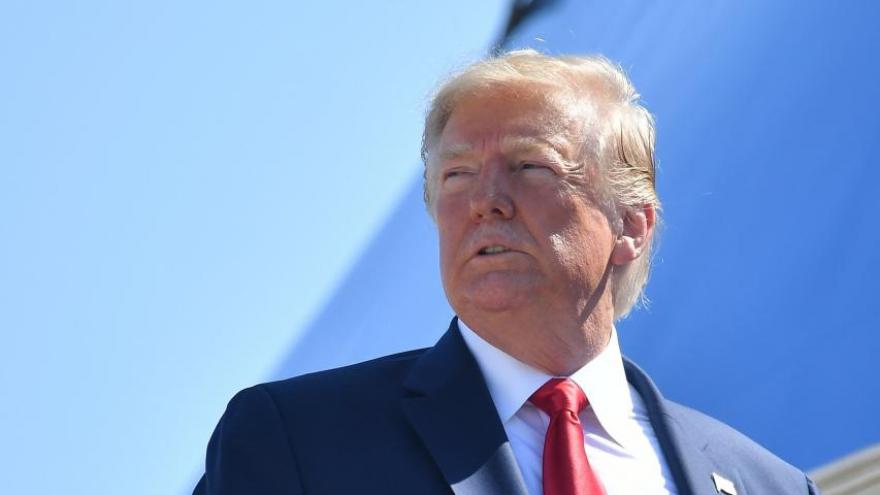 As former special counsel Robert Mueller prepared to testify before Congress for the first time about his investigation into Russian interference and obstruction of justice, President Donald Trump once again took aim at Mueller's credibility with a string of familiar attacks that belied his professed lack of interest in the hotly anticipated testimony.

(CNN) -- President Donald Trump emerged from the White House Wednesday afternoon and walked triumphantly toward television cameras to declare Robert Mueller's testimony on Capitol Hill delivered a "very good day" for him and Republicans. He also claimed that the fiery hearings ended with Democratic lawmakers getting "less than nothing" with which to pursue their investigations into him.

It was the remarkable cap to a day that saw the former special counsel, under oath, confirm the accuracy of instances of potential criminality by Trump detailed in his nearly 450-page report and once again reiterate that he had in no way exonerated the sitting President.

But for Trump, the optics of Democrats seemingly coming up empty in terms of new or damning information were all that mattered. His trumpeting of the moment he considered vindication came as a stark contrast to how he began the day.

Wednesday had begun with the President agitated at the prospect of Mueller's testimony, phoning allies and firing off a series of tweets attacking the former FBI director's credibility ahead of his testimony. But after watching Mueller's frequently halting, monosyllabic testimony come far short of Democrats' hopes for a made-for-TV moment that might catapult a case for impeachment, the President's demeanor shifted from irritation to triumph.

Still, Trump grew visibly frustrated and irate when he was pressed about aspects of Mueller's testimony, including the former special counsel's assertion that Trump could be indicted after leaving office. Trump falsely claimed that Mueller had corrected that statement -- even though Mueller's correction referred to a different part of his testimony -- and lashed out at reporters who questioned him about Mueller's remarks, calling them "fake news."

The moment was reminiscent of Trump's longstanding frustrations with his inability to successfully claim "total and complete exoneration" regarding collusion and obstruction of justice, because Mueller did not reach a conclusion on the latter and only determined that there was insufficient evidence to charge members of Trump's orbit with criminal conspiracy charges.

Trump was also miffed when reporters asked him about Mueller's comments that he "generally" agreed that Trump's written responses to him were not always truthful.

The President reiterated that his decision not to sit for an interview with Mueller during the investigation was "the right thing" because of the number of witnesses who were charged with lying to investigators.

Trump was pleased with the way Republicans from the House Judiciary Committee aggressively questioned and lectured Mueller. And Rep. Mark Meadows, one of his key Republican allies on Capitol Hill who sat in on the hearing, visited the White House.

Trump had been in the residence for much of the morning, but later moved to the West Wing. And despite initially claiming he would ignore the testimony, he kept a close eye on Mueller's appearance.

Earlier Wednesday, the President falsely accused Mueller of having conflicts of interest relating to the investigation, smeared Mueller's team of prosecutors as "Angry Democrats" and once again proclaimed "NO COLLUSION, NO OBSTRUCTION!" -- conclusions that Mueller did not reach in his report.

When the hearing got underway, Trump declared it a dud on Twitter, quoting a Fox News host who called the hearing a "disaster for Democrats" and -- after the House Judiciary Committee hearing ended -- thanked Democrats for holding the hearing.

The tweets reflected Trump's relentless focus on Mueller and the possibility Democrats could use his report as a springboard to launch an impeachment inquiry.

Trump on Monday said he would "probably" not watch the testimony, before quickly saying he might "see a little bit of it."

Trump's change in mood was reflected in his Twitter feed and in proclamations by his allies that the first of two House hearings was a flop.

"The last three hours have been an epic embarrassment for the Democrats," White House press secretary Stephanie Grisham said in a statement. "Expect more of the same in the second half."

Trump began firing off the string of tweets early Wednesday morning, pre-butting Mueller's impending testimony on Capitol Hill. The attacks were reminiscent of Trump's frequent attacks on Mueller during his time as special counsel, while he was conducting an investigation into the President and his associates -- public efforts that were included in Mueller's report as evidence of Trump's efforts to undermine the Mueller investigation and public trust in the inquiry.

Trump accused Democrats Wednesday morning of having "illegally fabricate(d) a crime" and "pinning it on a very innocent President." He once again characterized his efforts to interfere with the investigation -- evidence of which is laid out in the Mueller report -- as simply fighting back "against this illegal and treasonous attack on our Country" -- another familiar trope Trump has used to undermine Mueller's credibility.

Trump also maintained that Mueller should have investigated "himself" and a slew of the President's political opponents and critics, including his former rival for the presidency Hillary Clinton, former FBI Director James Comey and others. And he again described Mueller's investigation as "the Greatest Witch Hunt in U.S. history, by far!"

The President also suggested that Mueller applied and interviewed for the position of FBI director the day before he was tapped to serve as special counsel, a contention that is disputed in the Mueller report, including by the President's chief strategist at the time Steve Bannon, who told investigators that the meeting was to "offer a perspective on the institution of the FBI."

Later on Wednesday, Mueller denied that he met with Trump as a candidate for the FBI director opening.

Trump stopped tweeting a dozen minutes before Mueller appeared in the House Judiciary Committee hearing room to be sworn in for his testimony, but returned to social media soon after 10 a.m. to quote Fox News anchor Chris Wallace, who claimed Mueller's testimony "has been a disaster for the Democrats" and "a disaster" for Mueller's reputation.