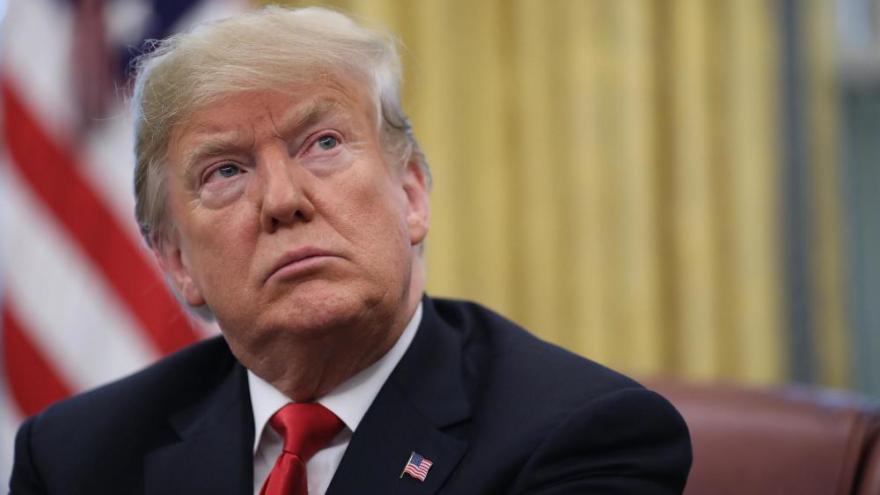 President Donald Trump claimed Wednesday that concerns over the novel coronavirus are only partially responsible for the US stock market plunge this week, insisting that the dive is also related to the Democratic presidential debate that took place after markets plunged.

(CNN) -- President Donald Trump claimed Wednesday that concerns over the novel coronavirus are only partially responsible for the US stock market plunge this week, insisting that the dive is also related to the Democratic presidential debate that took place after markets plunged.

"I think it took a hit for maybe two reasons. I think they look at the people -- you watched (the debate) last night and they say, 'If there's even a possibility that that could happen' -- I think it really takes a hit because of that. And it certainly took a hit because of this," Trump told reporters at the White House, referring to the coronavirus.

He later reiterated that investors hearing Democratic candidates "had a huge effect" on the markets. "I think you can add quite a bit of sell-off to what they're saying," Trump said. "I really believe that's a factor."

In fact, the debate took place after a two-day sell-off that caused a nearly 2,000-point drop in the Dow, and Dow futures also turned from positive to negative during Trump's coronavirus news conference Wednesday evening. The index's gains for the year had been wiped out Monday, and Tuesday marked its fourth-largest swing from highest to lowest point in a single session -- all before the Democratic debate started.

At its lowest, the Dow was off by 963 points. Still, Trump held Wednesday that the stock market -- which he uses as a signpost of the strength of the economy, a pillar of his reelection campaign -- will bounce back.

"I think the stock market will recover. The economy is very strong," he said.

CNN previously reported that the stock market decline has especially exacerbated the President's rising concerns over how to stem the outbreak of the coronavirus even though he has publicly declared the virus to be "very much under control in the USA," multiple people tell CNN.

Trump has been publicly downplaying coronavirus' effects, because he thinks doing otherwise could cause further panic in the markets -- and he's been frustrated with officials issuing warnings about the unknowns of the virus's spread. His son-in-law, Jared Kushner, is one aide who has encouraged him to downplay the latest developments, at least publicly, one person says.

Trump appeared to embrace the strategy Wednesday night, asserting that "because of all we've done, the risk to the American people remains very low."

Asked if he was worried about the spread of the virus in the US, the President said, "No, because we're ready for it."

"It is what it is. We're ready for it. We're really prepared."