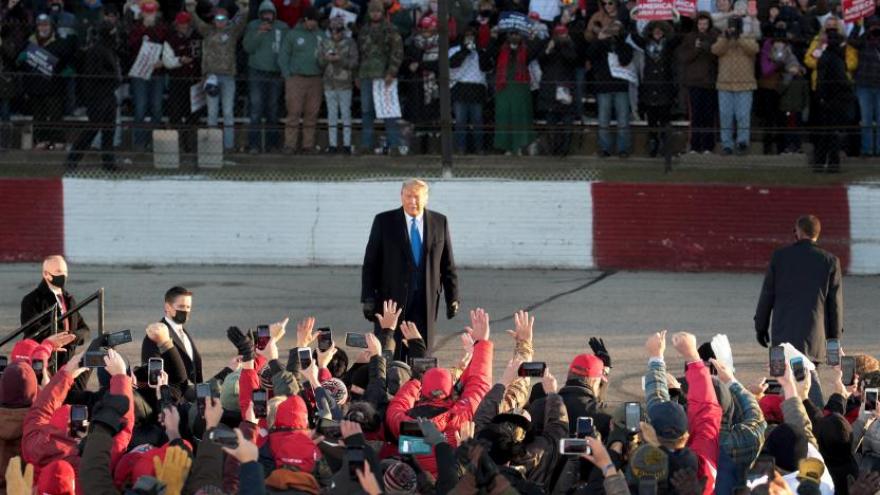 President Donald Trump's campaign website was defaced for a brief period on Tuesday in a hack. This image shows Trump arriving for a campaign rally at the LaCrosse Fairgrounds Speedway on October 27, 2020 in West Salem, Wisconsin.

(CNN) -- President Donald Trump's campaign website was defaced for a brief period on Tuesday in a hack.

A message was posted to the upcoming events page of Donaldjtrump.com that said the world had "had enough" of the "fake news" spread by Trump.

"Earlier this evening, the Trump campaign website was defaced and we are working with law enforcement authorities to investigate the source of the attack. There was no exposure to sensitive data because none of it is actually stored on the site. The website has been restored," campaign communications director Tim Murtaugh said in a statement.

The author or authors of the altered page claimed, without any evidence, to have dirt on Trump and posted details of a cryptocurrency account people could transfer funds to if they wanted to see the information released publicly.

The seals of the FBI and Department of Justice topped the message -- seemingly a parody of the message the FBI posts on websites it takes over as part of criminal investigations.

The entire Trump site appeared to go offline briefly for a few minutes after the message began spreading on social media.

The site seemed to be functioning normally as of Tuesday evening.

CNN has reached out to an online security provider listed as providing services to the campaign and the US Cybersecurity and Infrastructure Security Agency.

CISA Director Chris Krebs said on Twitter, "Like I said yesterday, website defacements are noise. Don't fall for these attempts designed to distract, sensationalize, and confuse. Ultimately they're trying to undermine your confidence in our voting process."

This story has been updated with reaction from Chris Krebs.