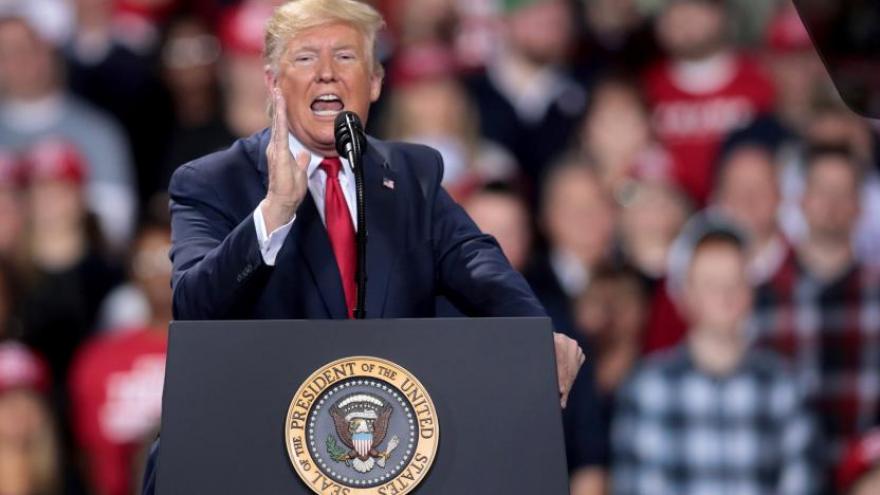 Attendees of President Donald Trump's upcoming rally in Tulsa, Oklahoma, must agree not to sue the campaign if they contract coronavirus.

(CNN) -- Attendees of President Donald Trump's upcoming rally in Tulsa, Oklahoma, must agree not to sue the campaign if they contract coronavirus.

Rallygoers are asked to RSVP to gain admission to the event and by registering, they must agree to a disclaimer that states they acknowledge the "inherent risk of exposure to COVID-19 exists in any public place where people are present."

"By attending the Rally, you and any guests voluntarily assume all risks related to exposure to COVID-19 and agree not to hold Donald J. Trump for President, Inc.; BOK Center; ASM Global; or any of their affiliates, directors, officers, employees, agents, contractors, or volunteers liable for any illness or injury," the disclaimer reads.

Trump's campaign officially announced plans on Wednesday for the President's first campaign rally since most of the country shut down to prevent the spread of the virus. He will appear at an indoor venue, the BOK Center, in Tulsa on Saturday, June 20, after pushing back the event one day in light of criticism that it fell on Juneteenth, the holiday commemorating the end of slavery in the United States.

The rally announcement comes as coronavirus cases are on the rise in some parts of the US. Cases are still increasing in several states, even as others show a downward trend or are holding steady. Nationally, more than 2 million people have been infected by the virus and more than 112,000 have died, according to data from Johns Hopkins University.

Catherine Sharkey, a law professor at New York University School of Law, said waivers like the Trump campaign's are likely to become a regular part of American life as the country reopens and the coronavirus remains a threat. However, the waivers offer only a base-level protection against liability.

"They only give limited protections, so they never would protect against, for example, gross negligence or recklessness," said Sharkey. "One could argue that holding a large public gathering that will draw people together in a context in which they're not able to do social distancing or follow the directive of the CDC, et cetera. One could argue that is grossly negligent."

The President has been anxious to get back out on the trail since in-person campaigning stopped. His campaign had originally drawn up plans to restart rallies in July, but it pushed up the timeline as more states started reopening their economies and as big crowds have taken part in demonstrations across the country in the wake of George Floyd's death late last month in the custody of Minneapolis police.

The campaign believes the crowds at those protests have opened the door to events like these rallies, despite warnings from public health officials that social distancing, facial coverings and limited public interaction are still necessary to prevent a second spike of the virus.

It's unclear what specific safety measures will be put in place at Trump's rally. Oklahoma Gov. Kevin Stitt's guidance to reopen the state still recommends its residents minimize time spent in "crowded environments," but it doesn't place limits on group gatherings.