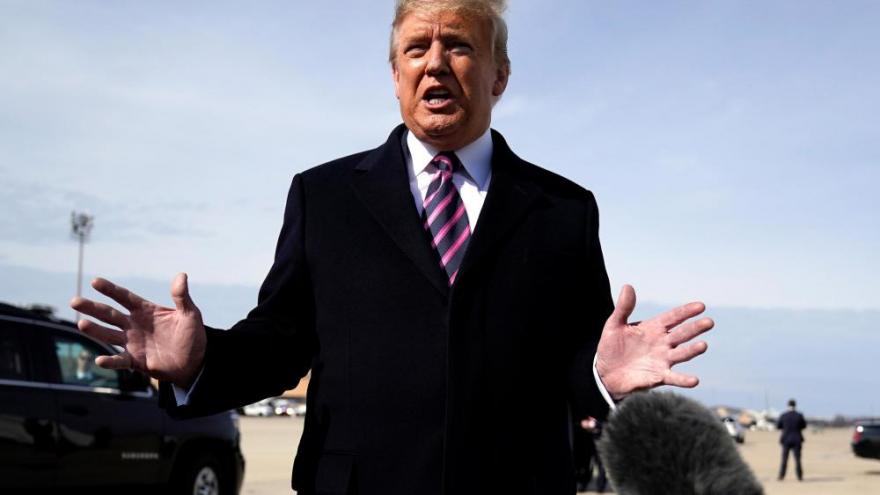 The Trump campaign on Wednesday announced it is rolling out "Black Voices for Trump" community centers to engage black voters ahead of the 2020 election.

(CNN) -- The Trump campaign on Wednesday announced it is rolling out "Black Voices for Trump" community centers to engage black voters ahead of the 2020 election in an effort to capitalize on a chaotic Democratic primary and gain momentum with a group that was once mostly out of reach to Republican candidates.

The campaign is launching 15 Black Voices for Trump community centers in major cities in Florida, Georgia, Michigan, Pennsylvania, Wisconsin and North Carolina over the next few weeks. The retail-style community centers will be similar to a Trump campaign victory office, functioning as a space for volunteers to gather, events to be held and voters to be registered, but will be branded and focused specifically on the black community.

The campaign expects to add additional spaces in the coming months.

Senior campaign adviser Katrina Pierson called the strategy a "woke concept." The word "woke" is expected to be part of the Black Voices for Trump community center marketing.

"This concept by itself is a woke concept in the fact that for decades you have had a community that has been controlled by the Democratic Party. Republicans haven't even gone into deliver their message. Now we have a Republican who is actually going to the community to deliver the message and ask for the vote," Pierson told reporters during a briefing Wednesday, according to quotes provided by the Trump campaign.

Trump may face an uphill battle with black voters. The outreach comes weeks after a Washington Post poll found that than 8 in 10 African Americans believe Trump is racist and that he has contributed to making racism a bigger problem in the United States. A majority of the poll's respondents, 58%, said Trump's actions as president are "very" bad for African Americans in the nation.

Trump has roundly denied accusations of racism. As President, he's faced blistering criticism over his public and private statements, like in 2017, when he blamed "both sides" after violence sparked by a neo-Nazi rally in Charlottesville, Virginia. He also privately referred to some African nations as "s***hole countries" and lambasted the protests led overwhelmingly by black NFL players. Last year, the US House of Representatives voted to condemn the President's comments when he told four congresswomen of color to "go back" to where they came from.

Exit polls showed that Trump only received 8% of the African-American vote in 2016.

Messaging to African Americans in this campaign will include school choice, criminal justice reform, Historically Black Colleges and Universities, workforce training and the economy, as well as the President's trade policy, which, a senior campaign official said, is "very popular amongst the black community."

The campaign feels it is much better at coalition-building than it was in 2016, and it will use its juggernaut of data and financial resources to target voters where it can.

A senior official said the campaign saw an opening with black voters through its extensive data operation.

"The last campaign -- the President was figuring out how to do a campaign, and he got a lot more right than he got wrong but now hopefully you'll see that this is indicative of how he'll run a government in the second term," the official said.

Unlike in 2016, Trump can point to specific victories impacting the black community, his son-in-law and top adviser Jared Kushner says.

"Last time it was, 'What the hell do you have to lose?' Now you show them what they've gained from President Trump and what more they can gain if they get four more years of President Trump," Kushner said of black voters.

He added, "You're never going to get the votes you don't ask for."

The rollout comes as Democrats are fighting for their party's nomination in the days before the primary in South Carolina, a state where the black vote is crucial. Trump will hold a campaign rally in North Charleston, South Carolina, on Friday.

"While the other side is focused on beating up each other, we're focused on growing the party," Kushner said.

A senior campaign official expects this strategy to expand in the coming months to additional coalition-targeted community centers, which could include Latinos for Trump and Veterans for Trump.