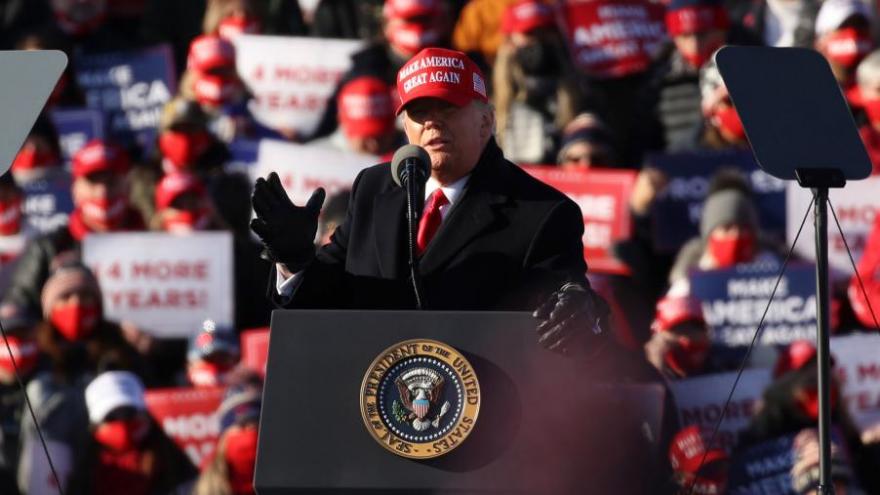 President Donald Trump's campaign is planning a messaging blitz to fuel its argument -- unsupported by any evidence to date -- that the President's second term is being stolen from him through corrupt vote counts in battleground states, three sources familiar with the matter told CNN.

(CNN) -- President Donald Trump's campaign is planning a messaging blitz to fuel its argument -- unsupported by any evidence to date -- that the President's second term is being stolen from him through corrupt vote counts in battleground states, three sources familiar with the matter told CNN.

One of the ways it plans to do that is presenting obituaries of people the campaign will claim voted in the election and considering having campaign-style rallies to amplify the message, according to two of the sources.

So far, the litigation put forward by the campaign has not included any proof to support allegations of widespread fraud. And nothing campaign officials have put forward would change the outcome in any state.

But the President is being urged by his son-in-law and senior adviser Jared Kushner, attorney Rudy Giuliani and campaign adviser Jason Miller to hold rallies throughout the US pushing for recounts of votes, sources close to Trump told Jake Tapper. Kushner did not offer a comment on this story. Miller denied the story in a tweet.

Asked for comment, Giuliani replied in a text to CNN: "Nothing to do with rallies. Working on PA and Mich cases."

CNN reported earlier Saturday that Kushner had approached Trump about conceding the election, two sources told CNN. But his position grew murkier as the day went on as it emerged he was also trying to placate Trump by suggesting rallies.

The goal of the messaging blitz is to raise enough doubt about the results that secretaries of state in battlegrounds feel pressure to open investigations or call on their own for recounts -- something that would prolong the process and potentially give the campaign more time to advance its litigation through the courts.

A previous fact check by CNN of claims by a handful of prominent Republicans, such as members of Trump's family and supporters like former House Speaker Newt Gingrich and former acting Director of National Intelligence Richard Grenell, of dead people voting in Michigan fell apart under scrutiny. A CNN analysis of the claim and the purported backing for it did not find a single instance of that happening.

One idea being tossed around the campaign is whether it can run out the clock enough to put forward a Republican slate of electors in key states where President-elect Joe Biden won the popular vote. State laws vary on whether they can appoint electors that don't reflect the will of the people. One of the sources cautioned it was unclear how seriously this idea is being considered.

Axios was first to report the planned presentation of obituaries and the upcoming rallies to cast doubt on the results.

Campaign aides told CNN prior to Election Day that a post-election push involving anything from a surrogate operation to rallies was possible in the event the results were close on November 3, as they initially appeared to be. But Biden has amassed enough of a lead in multiple states to win the race, despite the President's refusal to acknowledge the loss.

Many of the aides around the President want him to continue fighting -- if not for a change in outcome, which is not considered possible by experts at this point, then for the Trump supporters who remain hungry for a fight against results they don't believe. Some of those around Trump, however -- including Kushner and first lady Melania Trump -- have discussed whether he should acknowledge his defeat, sources told CNN this weekend. But others have been urging Trump not to give up.

One person familiar with the plans said the team wants to continue the battle for closer scrutiny of the ballot tallies even though Trump himself has not always seemed privately to believe he will be successful.

"Of anything, our worry is getting Trump more fired-up, not tempering him," the official said.

This story has updated with additional reporting and reaction.