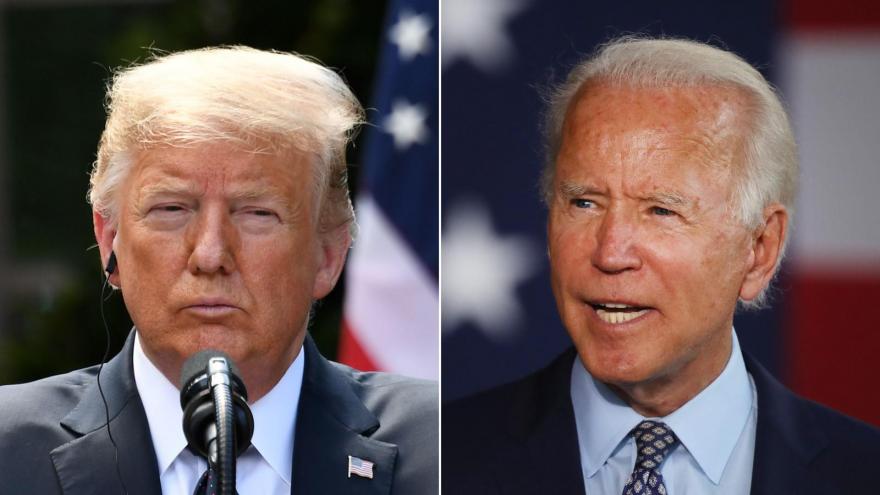 Donald Trump's presidential campaign called for an additional presidential debate in a letter to the Commission on Presidential Debates on Wednesday.

(CNN) -- Donald Trump's presidential campaign called for an additional presidential debate in a letter to the Commission on Presidential Debates on Wednesday.

Rudy Giuliani, the former mayor of New York who represents the Trump campaign on debate issues, wrote in the letter that the current debate schedule is an "outdated dinosaur and not reflective of voting realities in 2020," citing the fact that millions of Americans will have the ability to vote early before the first general election debate in late September.

"For a nation already deprived of a traditional campaign schedule because of the COVID-19 global pandemic, it makes no sense to also deprive so many Americans of the opportunity to see and hear the two competing visions for our country's future before millions of votes have been cast," Giuliani wrote.

Giuliani wrote in the letter that if the commission will not add a fourth debate, "we strongly urge the Commission to move up the final debate (currently scheduled for October 22, 2020) to instead happen during the first week in September."

The Trump campaign also submitted a list of suggested debate moderators, which included Republican radio hosts Larry Elder and Hugh Hewitt, and called on the commission to "solidify its backup plans for debate locations and logistics in the event additional COVID-19 complications arise at any of the locations." Last month, the University of Notre Dame withdrew from hosting a debate, citing coronavirus concerns.

Andrew Bates, a spokesman for presumptive Democratic presidential nominee Joe Biden's campaign, responded to the letter on Wednesday, saying that the Biden campaign has said "all along, including in a letter to the commission in June, that Joe Biden will appear on the dates that the commission selected and in the locations they chose. Donald Trump has not, continually trying to insert his choice of friendly moderators, now including one who just published an op-ed offering 'the case' for Trump's reelection. Joe Biden will be there. We await Donald Trump's decision -- and perhaps the president should put as much time into managing COVID as does into this."

It is unclear whether the Trump campaign has officially agreed to appear at the commission's three scheduled debates.

Erin Perrine, a Trump campaign spokeswoman, said, "Yes, we have agreed with the debate commission," when asked by Fox News on Tuesday whether the campaign has "formally committed" to the commission's appearances.

But after the appearance, two Trump campaign officials would not confirm that the campaign had formally agreed to the debates, something the Biden campaign did in June.

Campaign aides have said the President is "ready to debate," but that they have yet to formally agree to the commission's plans, in part, because they are hoping additional contests will be added.

Tim Murtaugh, a Trump campaign spokesman, said, "Voters in sixteen states will already be casting their early votes before the first debate takes place on September 29th as the schedule stands now. We don't think it's too much to ask that Americans get a look at the two candidates side-by-side before voters start voting."