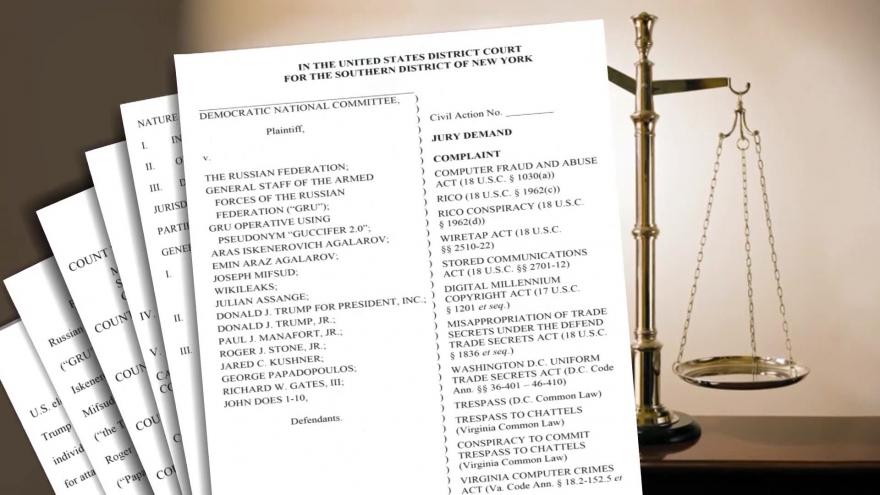 President Donald Trump's re-election campaign is slamming a lawsuit filed by the national Democratic Party as "frivolous" and a "last-ditch effort to substantiate" what it says are "baseless" allegations of Russian collusion.

The Democratic National Committee's suit accuses Trump's 2016 campaign, his son, his son-in-law, the Russian Federation and WikiLeaks of a conspiracy to undercut Democrats in the 2016 election.

But Trump's 2020 campaign manager Brad Parscale says he thinks the "sham lawsuit about a bogus Russian collusion claim filed by a desperate, dysfunctional, and nearly insolvent Democratic Party" will be dismissed.

Parscale is also warning of consequences if the suit proceeds.

He says the campaign is prepared to leverage the discovery process to explore the inner workings of the DNC, including officials' emails.

The national Democratic Party sued President Donald Trump's campaign, his son, his son-in-law, the Russian Federation and WikiLeaks on Friday, accusing them of an intricate conspiracy to undercut Democrats in the 2016 election by stealing tens of thousands of emails and documents.

The lawsuit filed in Manhattan federal court sought unspecified damages and an order to prevent further interference with computer systems of the Democratic National Committee.

"During the 2016 presidential campaign, Russia launched an all-out assault on our democracy, and it found a willing and active partner in Donald Trump's campaign," DNC Chairman Tom Perez said in a statement.