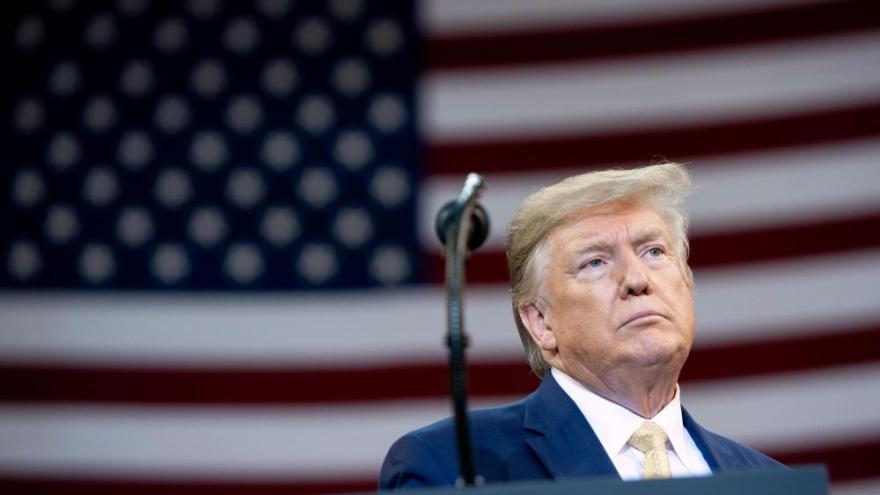 US President Donald Trump looks on during a "Keep America Great" rally at Sudduth Coliseum at the Lake Charles Civic Center in Lake Charles, Louisiana, on October 11, 2019.

(CNN) -- President Donald Trump on Tuesday called House Democrats' impeachment inquiry a "lynching," employing a term associated with the extrajudicial killings of African-Americans while calling on Republicans to aid his political defense.

"So some day, if a Democrat becomes President and the Republicans win the House, even by a tiny margin, they can impeach the President, without due process or fairness or any legal rights. All Republicans must remember what they are witnessing here - a lynching. But we will WIN!" the President tweeted.

Trump has repeatedly railed against the probe, calling it a "witch hunt" and a "fraud," but Tuesday marks his first use of the term "lynching," which is associated with a period of horrific racial violence in the United States, in regard to the inquiry. Following Emancipation and the Civil War, killings, often carried out in public settings, known as lynchings, terrorized newly freed black Americans. Thousands of citizens were killed this way.

Trump's use of the term is also notable as he has frequently stoked racial tensions while in office, from referring to undocumented immigrants as an "infestation" to sharply criticizing African-American athletes who protest during the National Anthem.

White House deputy press secretary Hogan Gidley argued Tuesday that Trump's use of the word "lynching" to describe the impeachment process was fair.

Speaking to reporters, Gidley said Trump "is not comparing what happened to him with one of our darkest moments in American history. What he's explaining, clearly, is the way he's been treated by the media since he announced for President." He also claimed Trump was referring to the way Democrats were treating him, saying that the President is "receiving zero due process from Democrats on the Hill. That's what he's talking about."

Impeachment is a political process and the President, through the White House counsel, has opted not to cooperate and to instead block congressional requests.

The impeachment inquiry, which began four weeks ago, is moving rapidly, with ongoing witness testimony conducted on Capitol Hill and bombshell revelations opening up new avenues for investigation since the whistleblower's report about Trump's call with Ukrainian President Volodymyr Zelensky came under scrutiny. On Tuesday, the United States' top diplomat in Ukraine, acting Ambassador Bill Taylor, testifies behind closed doors. Though Democrats had hoped to hold a vote on impeachment before the Thanksgiving holiday, there is growing expectation that the votes could slip closer to the end of the year. Trump has lashed out against the investigation, questioning whether the whistleblower needs protection and slamming congressional Democrats.

Trump previously retweeted a statement during the 2016 election referring to his treatment by journalists as a "disgusting lynching" in September 2015.

Trump's statement on Tuesday drew a swift rebuke from Democrats.

"I really believe this man is prone to inflammatory statements and that is one word no president ought to apply to himself. I've studied presidential history quite a bit and I don't know if we've ever seen anything quite like this," Rep. James Clyburn, a South Carolina Democrat, said on CNN's "New Day."

"I am not just a politician up here. I'm a southern politician, I'm a product of the South. I know the history of that word, that is a word that we ought to be very, very careful about using," he said.

Congressional Black Caucus Chairwoman Karen Bass told CNN that Trump's tweet is consistent with his pattern of throwing out "racial bombs" to throw "red meat" to his base when his back is against the wall. California Rep. Harley Rouda called Trump's tweet "offensive" and Rep. Bobby Rush, D-Illinois, asked Trump on Twitter, "what the hell is wrong with you?"

"Lynching is a reprehensible stain on this nation's history, as is this President. We'll never erase the pain and trauma of lynching, and to invoke that torture to whitewash your own corruption is disgraceful," she said in a tweet.

Republican Rep. Jim Jordan of Ohio, a key ally of the President on Capitol Hill, declined to say whether the tweet was appropriate when asked.

Another top Trump ally, Sen. Lindsey Graham, was more vociferous in his defense.

"I think that's pretty well accurate. This is a sham. This is a joke. I'm going to let the whole world know that if we were doing this to a Democratic president you would be all over me right now," Graham told reporters.

Graham added, "This is a lynching in every sense. This in un-American."

House Minority Leader Kevin McCarthy, however, said he didn't agree with Trump's use of the word.

"I would not use that language," McCarthy said, adding that he feels the impeachment probe is unfair.

CLARIFICATION: This story has been updated to reflect that Sen. Graham said the treatment of Trump is a lynching in "every" sense.