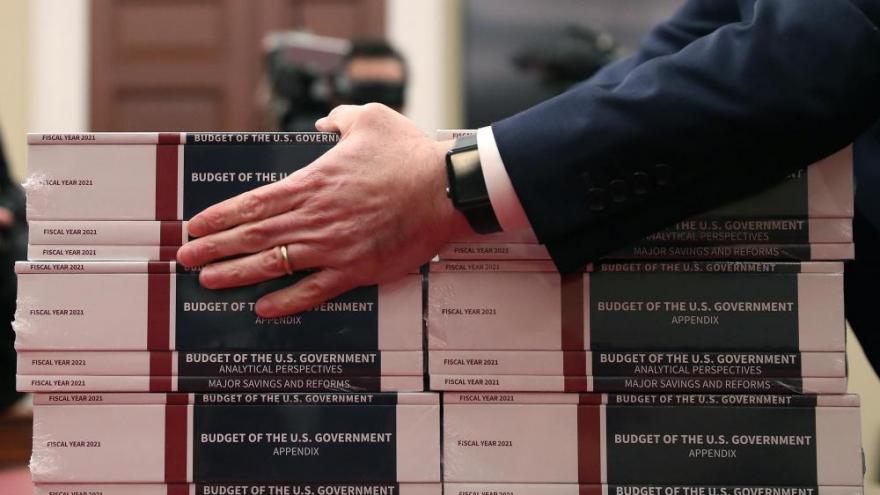 Copies of President Trump's FY2021 budget are delivered to the House Budget Committee, on February 10, 2020, in Washington, DC.

(CNN) -- The Trump administration wants to slash billions of dollars in federal support from Medicaid, food stamps and other safety net programs for the poor, while largely sparing the Medicare program that benefits seniors.

The $4.8 trillion federal budget proposal for 2021, which the White House unveiled on Monday, is largely a wish list of President Donald Trump's priorities. But few of these cuts are expected to get past the Democrat-controlled House of Representatives.

Trump told the nation's governors at a White House event that he would preserve entitlement programs.

Here's what he is proposing:

The budget does call for changes to the Medicare program, but they would largely affect doctors and hospitals.

The decrease in federal spending on Medicare would total about $750 billion over 10 years, but that includes shifting two programs out of the budget. After accounting for those changes, the reduction is just over $500 billion, said Marc Goldwein, senior policy director for the Committee for a Responsible Federal Budget, a watchdog group.

Much of that cut comes from reducing payments to providers, which would not directly affect beneficiaries' costs. The budget notes that it supports legislative efforts to establish an out-of-pocket maximum for seniors in Medicare's Part D drug coverage.

Trump, who has repeatedly promised to protect Social Security and Medicare, caused a stir last month when he told CNBC that entitlement cuts will be on his plate "at some point."

Asked by CNBC whether he was willing "to do some of the things that you said you wouldn't do in the past, though, in terms of Medicare," Trump said: "We're going look."

Medicaid and other assistance

The President, however, is proposing big cuts in Medicaid, health care and other assistance programs.

The budget calls for $844 billion in savings over 10 years from the "President's health reform vision." However, the only detail provided is eliminating the enhanced federal match for Medicaid expansion enrollees, said Aviva Aron-Dine, vice president for health policy at the left-leaning Center on Budget and Policy Priorities. That alone would not account for the estimated savings.

Under the Affordable Care Act, states have the option of expanding Medicaid coverage to low-income adults, with the federal government picking up 90% of the tab. That's more than states receive to cover traditional Medicaid enrollees, who are largely children, senior citizens, the disabled and certain low-income adults.

The administration estimates it would save more than $152 billion over a decade from implementing work requirements in Medicaid. The Centers for Medicare & Medicaid Services has given permission to 10 states to require certain beneficiaries to work, but the effort has been largely put on hold while multiple lawsuits work their way through the courts. Other states are seeking approval, but their applications are still pending.

In total, the budget calls for $1 trillion in cuts to Medicaid and the Affordable Care Act over a decade, Aron-Dine said.

"That would cause many millions to lose coverage," she said.

Reforming food stamps -- formally known as the Supplemental Nutrition Assistance Program, or SNAP -- would save nearly $182 billion over a decade. This is a reduction of about 28% compared with the current funding projections estimated by the Congressional Budget Office, according to the left-leaning Center for American Progress.

"There's no way you can argue that this is cutting the fat," said Seth Hanlon, senior fellow at the center. "That's just taking food off people's tables."

The administration rolled out a new rule in December that makes it harder for states to waive existing work requirements for certain able-bodied, working-age adults without dependents. It has also proposed tightening the rules governing who qualifies for aid. These, along with a more minor proposal, could decrease the number of people on food stamps by 3.7 million, according to an Urban Institute report.

More than 36 million Americans received food stamps as of October, according to federal data.

The budget also calls for sending food stamp recipients "Harvest Boxes" of food directly to households. This idea sparked immediate concern and questions among consumer advocates and food retailers when the administration included it in the past.

Also, the administration would reduce the Temporary Assistance for Needy Families block grant and eliminate the program's contingency fund, which states use during economic downturns -- saving a total of more than $21 billion over a decade. TANF replaced what was known as welfare during the 1996 reform effort.

The administration wants to require that those claiming the Child Tax Credit, Earned Income Tax Credit and credit for other dependents provide a Social Security number, which would target immigrants. This would save nearly $73 billion over 10 years, according to the budget's summary table.

The budget notes that the participation rate for working age Americans with disabilities is less than half that of their peers who don't have disabilities.

"We have unprecedented job growth and demand for workers outpaces supply, and we have the responsibility to bring workers off the sidelines," the budget notes

One area Trump would boost funding: Addressing opioid abuse and mental health in Medicaid. He calls for adding $7 billion over a decade to those programs.

This story has been updated with further outside analysis and comments.