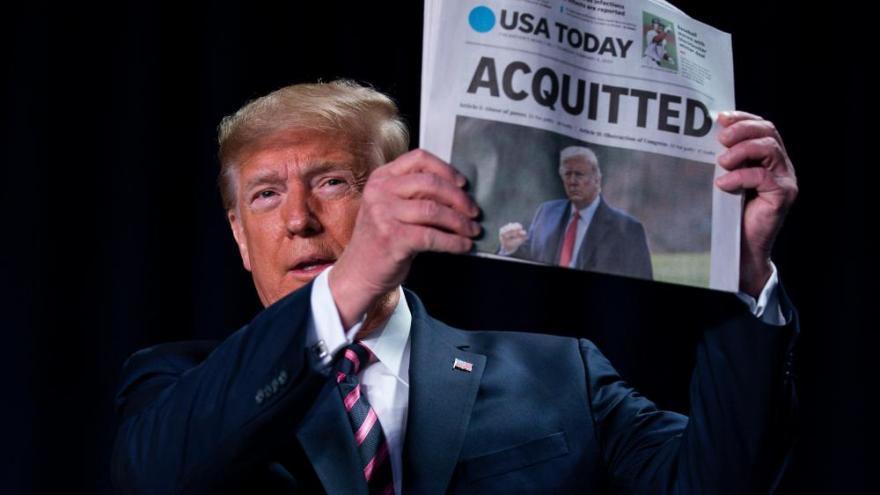 President Donald Trump holds up a newspaper with the headline that reads "ACQUITTED" at the 68th annual National Prayer Breakfast, at the Washington Hilton, Thursday, Feb. 6, 2020, in Washington.

To Trump's backers, the event amounted to a release of justified fury after five months under a cloud of impeachment.

But any Republican who hoped he'd learned lessons from his experience was likely disabused of the notion as he railed against his rivals and insisted he'd done nothing wrong.

There was no indication he planned to adopt a new approach following the ordeal. Instead, Trump spent more than an hour bouncing between disparate injustices and angry asides.

"We've been going through this now for over three years. It was evil, it was corrupt, it was dirty cops, it was leakers and liars. And this should never, ever happen to another president, ever," Trump told an East Room packed with conservative lawmakers, media pundits, and a number of Cabinet officials, who cheered as Trump meandered through a list of grievances and musings after the Senate declared him not guilty.

On Sen. Mitt Romney, the Utah Republican who voted to convict: a "failed presidential candidate" who "used religion as a crutch."

On James Comey, the FBI director he fired: "A dirty cop" who represented "top scum" at the agency.

On the Russia investigation led by special counsel Robert Mueller: "It was all bulls**t."

On House Speaker Nancy Pelosi and Senate Minority Leader Chuck Schumer, who led the effort to oust him from office: "In my opinion, it's almost like they want to destroy our country."

It was a stream-of-consciousness victory lap that even Trump acknowledged had no real format.

"It's not a news conference, it's not a speech, it's not anything," he said of the event, which seemed at various moments to be ending only to gain speed again with another round of insults.

"So that's the story. We've been treated very unfairly," Trump said at one point before launching anew into a recreation of texts between two FBI officials.

It was a stark contrast to Tuesday's State of the Union address, which proceeded without any mention of the impeachment. Aides said they had to convince Trump not to mention the proceedings in those remarks, and to save them instead for after acquittal.

Indeed, his event on Thursday had the feeling of pent-up frustrations being launched in every direction.

"They took a phone call, which was a totally appropriate call, and they brought me to the final stages of impeachment," Trump said.

He singled out his allies in the room such as Senate Majority Leader Mitch McConnell, who helped keep Republicans in line during his Senate trial.

Trump spoke favorably of his allies in Congress, who he singled out one-by-one for praise.

He noted Rep. Jim Jordan, who rarely wears a suit jacket, is "obviously very proud of his body."

Rep. Steve Scalise, the Republican whip, is "more handsome" now after being "whacked" during a near-fatal shooting during a 2017 baseball practice.

And at least two -- Reps. John Ratcliffe and Mike Turner -- are "Perry Mason types" who he'd cast in a remake.

"We've all been through a lot together," he told his crowd, which also included members of his legal team and first lady Melania Trump.

He apologized to his family "for having them have to go through a very phony rotten deal by some very sick people."

The formal White House event was meant to be the final word on the impeachment saga. But few expect the ordeal to fade from view; Trump is stung and angry at being impeached by the House and his allies say it's unlikely he'll let it go anytime soon.

He dove into the fray earlier at a morning prayer breakfast, holding up newspapers blaring enormous "ACQUITTED!" headlines and launching into an attack on the process.

"As everybody knows, my family, our great country and your president have been put through a terrible ordeal by some very dishonest and corrupt people," he said.

He added later: "When they impeach you for nothing, then you're supposed to like them, it's not easy folks. I do my best."

The message wasn't one of conciliation, apology or regret, which is how the last president to be impeached, Bill Clinton, ended his trial.

Unlike Clinton, Trump will face voters in November. And there are almost no examples from his presidency of admissions he was wrong.

Instead, Trump has shown signs he feels emboldened by the acquittal. After the vote, he tweeted a video meme suggesting he could remain in office for decades to come, a joking affront to his rivals.

And on Thursday he returned to his original allegations against Joe and Hunter Biden, who he insisted engaged in corruption despite no evidence of wrongdoing.

Even as some Republican senators acknowledged Trump's behavior toward Ukraine was wrong, there was little political consequence for Trump since they voted to keep him in office.

Romney, the one Republican who voted to convict, has been shunned by Trump's allies. The President's son even suggested he be evicted from the Republican Party.

The GOP fealty to the President has Trump's critics worried about where he'll go next. With no apparent consequence for behavior they see as corrupt, Trump will enter his reelection campaign unchecked and unbound.

He is expected to scale up his politicking in the coming months, starting Monday in New Hampshire on the eve of that state's first-in-the-nation primary. Aides say Trump is itching to add more rallies to his calendar, and one official said to expect at least one rally a week for the rest of the year. And though much depends on his other commitments, Trump has told aides he wants to eventually return to the pace he kept during the 2016 campaign.