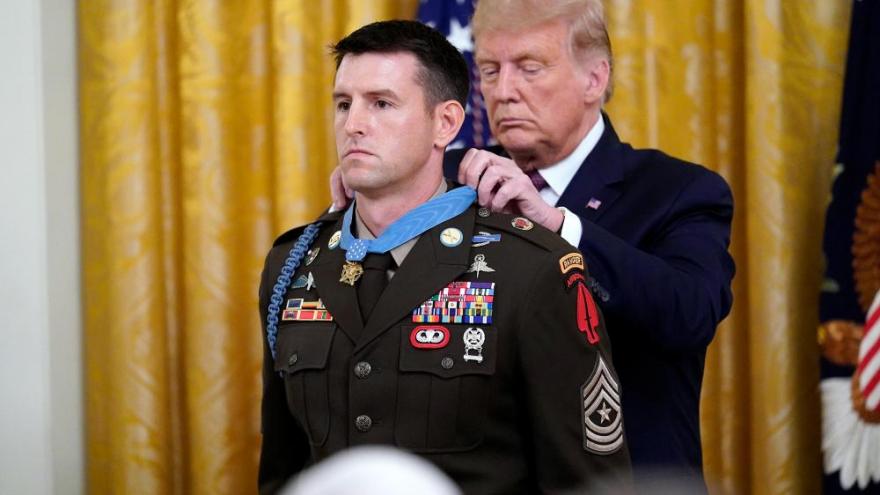 President Donald Trump awards the Medal of Honor to Army Sgt. Maj. Thomas P. Payne in the East Room of the White House on Friday, Sept. 11, 2020, in Washington.

(CNN) -- President Donald Trump awarded the Medal of Honor on Friday to an Army Ranger who led a dramatic hostage rescue in Iraq in 2015.

The ceremony, taking place on the 19th anniversary of the September 11 terrorist attacks, honored Sergeant Major Thomas Patrick Payne for successfully evacuating dozens of hostages being held by ISIS during a nighttime rescue mission in Kirkuk Province, Iraq, in support of Operation Inherent Resolve.

"He saved multiple hostages and he was the last man to leave. He wouldn't leave. No matter what they said, no matter who ordered him to do it, he wouldn't do it. He was the last one out," Trump said during the medal ceremony at the White House.

"It was one of the largest and most daring rescue missions in American history. Pat and his team rescued 75 captives and killed 20 ISIS terrorists. Pat, you embody the righteous glory of American valor. We stand in awe of your heroic, daring and gallant deeds," the President said. "You truly went above and beyond the call of duty to earn our nation's highest military honor."

Mass graves dug inside the compound had been spotted during surveillance, a US official with direct knowledge of details of the raid told CNN at the time. The firefight marked the first time US forces stepped into combat against ISIS in Iraq, one US official said in 2015.

During the ceremony at the White House, among top military brass and administration officials, the President also joked that the severe leg injury Payne endured from a grenade may have been "worth it" because it led to Payne meeting his future wife.

"While recovering in South Carolina, Pat met with his wife, Alison. Well that probably wasn't a bad wound then, was that? I hope you're going to say it was worth it. It was," Trump said.

The ceremony comes a week after The Atlantic reported that Trump disparaged US service members killed in battle and chose to skip a ceremony honoring veterans.

The Atlantic reported that Trump didn't want to attend a ceremony at the Belleau Wood Aisne-Marne American Cemetery in France in 2018 because he was concerned that the rain would dishevel his hair. The President has forcefully denied The Atlantic's reporting, insisting that the Secret Service had prevented him from attending the ceremony.

The Medal of Honor is the most prestigious decoration in the US military. Recipients must have demonstrated "incontestable proof of the performance of the meritorious conduct, and each recommendation for the award must be considered on the standard of extraordinary merit," the White House statement said.