Trump associates, including Giuliani, are asking for pardons 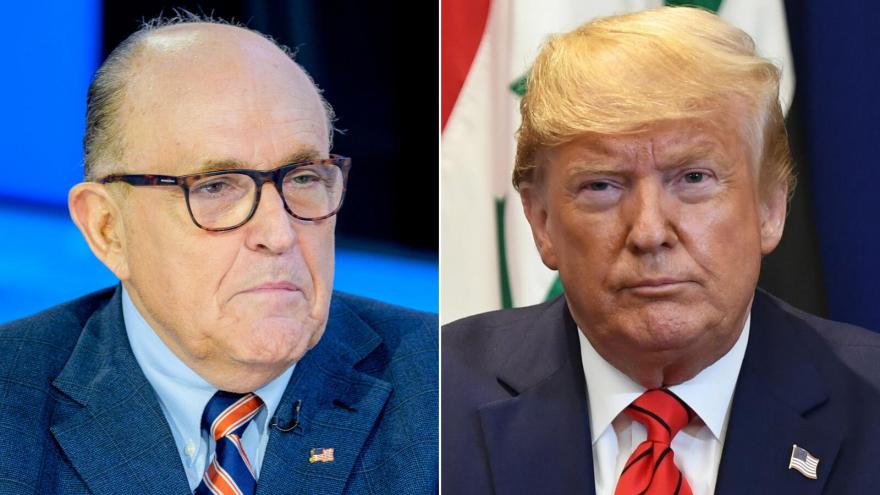 (CNN) -- President Donald Trump's associates are making appeals to him in the hopes of obtaining pardons before he leaves office, a source familiar with the matter told CNN on Tuesday.

The source said the list of associates broaching the subject of preemptive pardons that would seek to shield those individuals from prosecution includes Rudy Giuliani, who has been leading the President's long-shot legal battles to overturn the results of the 2020 presidential election in his role as Trump's personal attorney.

Since the election, Trump has been discussing with advisers preemptively pardoning several people close to him, including his children, son-in-law and Giuliani, a separate source familiar confirmed to CNN. The potential pardon list includes others who are close to the President and could be legally vulnerable but have not been charged.

Donald Trump Jr. was under investigation by special counsel Robert Mueller for contacts he had with Russians, but was never charged. Trump's son-in-law, Jared Kushner, provided false information about his foreign contacts when applying for his security clearance, but Trump issued him one anyway.

The President has told advisers he thinks that he and his family have been unfairly targeted and that he's concerned the legal pursuits could continue under the Biden Justice Department.

Trump's lawyers and allies have been lobbying him for pardons ranging from their personal clients to people whom Vice President-elect Kamala Harris put behind bars, according to multiple people. She was a state prosecutor, however, and pardons apply only to federal crimes.

The New York Times and ABC News first reported that Giuliani was discussing a pardon with the President and on discussions about preemptive pardons for Ivanka Trump, Eric Trump and Donald Trump Jr.

Giuliani denied discussing a preemptive pardon with the President, telling CNN that The "(New York) Times is completely wrong." He further denied that he has talked to anyone at the White House about a pardon for himself.

It's not clear what potential criminal exposure Giuliani or other associates are attempting to preempt. But the first source familiar with the discussions went on to cite what friends and allies of the President see as hostility from the incoming Biden administration toward Trump associates.

"Don't trust the Dems," the source said, describing the pardons being sought as "blanket" protection from future prosecution.

Nine individuals in Trump's orbit, including his former national security adviser Michael Flynn and longtime friend Roger Stone, have been indicted or found guilty of crimes related to a constellation of alleged criminal conspiracies.

The appeals come on the heels of Trump's decision to pardon Flynn.

Last week, the President granted Flynn a full pardon, absolving him of charges related to lying to federal agents over his contact with the Russian ambassador to the United States.

Flynn's pardon was Trump's second act of clemency related to prosecutions of advisers of the President. Earlier this summer, Trump commuted Stone's sentence.

At least one major ally is appealing further to his instinct for self-preservation, suggesting a self-pardon should be issued.

On Monday, Fox News host Sean Hannity said on his radio show that the President should pardon his family and himself to avoid being prosecuted by the incoming Biden administration.

"The President out the door needs to pardon his whole family and himself," Hannity said, later adding, "I assume that the power of the pardon is absolute, and that he should be able to pardon anybody that he wants to."

CNN's Maegan Vazquez and Caroline Kelly contributed to this report.