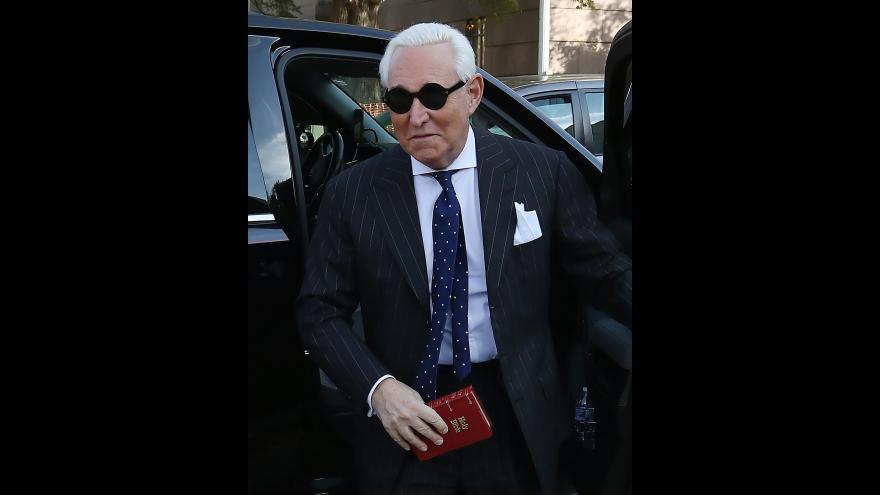 Longtime Trump associate Roger Stone was found guilty of lying to Congress and other charges in a case that has shed new light on President Donald Trump's anticipation of the release of stolen Democratic emails in 2016 by WikiLeaks.

(CNN) -- Longtime Trump political adviser Roger Stone was found guilty on Friday of lying to and obstructing Congress in a case that has shed new light on President Donald Trump's anticipation of the release of stolen Democratic emails in 2016 by WikiLeaks.

Stone, a political operative and Trump's friend, was found guilty of all seven counts brought by the Justice Department, a victory for special counsel Robert Mueller's Russia investigation. Stone was found guilty of five counts of lying to Congress, one of witness tampering and one of obstructing a congressional committee proceeding. Among other things, he misled Congress about his communications with Trump campaign officials in 2016, the jury unanimously decided.

The verdict out of Washington marks a stunning conclusion to one of the highest-profile prosecutions to emerge from the Mueller investigation -- a case that began with one of Trump's most vocal supporters arrested during a predawn raid as the special counsel's investigation wound down and since then has gradually revealed new information about the Trump campaign's positive reception to foreign interference in the 2016 US election.

Stone had no audible reaction as the courtroom deputy read the jury's verdict, but he slouched, standing, with a frown. His movements were slow and deliberate as he took a sip of water while each juror stated their position, confirming their unanimous decision, then hung behind in the corner of the courtroom, rarely speaking to others as attorneys and onlookers filed out.

His wife, too, simply looked straight ahead, though a friend of Stone's, Michael Caputo, turned his back to the jurors when all in the courtroom stood to watch them leave. As those in the courtroom dispersed, Stone kissed his wife on the cheek.

Thirty minutes after the jury delivered its verdict, Trump tweeted about his displeasure with it.

"So they now convict Roger Stone of lying and want to jail him for many years to come. Well, what about Crooked Hillary, Comey, Strzok, Page, McCabe, Brennan, Clapper, Shifty Schiff, Ohr & Nellie, Steele & all of the others, including even Mueller himself? Didn't they lie?" the President wrote on Twitter, citing his political foes who either worked on or contributed information to the Russia investigation. "... A double standard like never seen before in the history of our Country?"

Prosecutors asked the judge to take Stone into custody immediately, but she declined. After considering that he may have communicated with right-wing commentator Alex Jones this week -- potentially violating a gag order on his case that prevents him from speaking about it -- Judge Amy Berman Jackson said she would keep a gag order on him as he awaits sentencing. He may return home to Florida, and his sentencing is set for February 6.

Stone potentially faces prison time, but his sentence will be entirely up to the judge. For the most serious of his crimes, witness tampering, he faces a maximum sentence of 20 years.

"He has been here for every court appearance. I have no reason to believe" he won't come to his next appearance, Jackson said Friday.

After leaving the courthouse and arriving where he's been staying in Washington, Stone told CNN, "No comment," when asked if he would seek a pardon from the President.

In recent months, Trump has weighed pardoning Stone if he was convicted, multiple people familiar with his thinking say.

Several of Stone's allies have lobbied the President to do so, but multiple people also have advised the President that doing so would be a terrible idea politically and have cautioned against it, people familiar with the situation have told CNN.

These discussions were happening while a conviction was still hypothetical. Now that a federal jury has convicted Stone, it's not clear where the President stands.

According to prosecutors, Stone lied during testimony and failed to turn over documents to Congress in 2017 showing he had sought to reach WikiLeaks the previous year. He lied about five facts, obscuring his attempt to use intermediaries to get information that could help then-candidate Trump in the election against Hillary Clinton.

WikiLeaks had released emails in July 2016 that the Russians had hacked from Democratic Party servers, and followed up with drops of emails stolen from the Clinton campaign's chairman in October 2016, continuing until Election Day.

Stone's trial at a federal courthouse in Washington revealed the extent to which the longtime Trump friend was directly in touch with Trump and other campaign officials about Wikileaks' 2016 release of hacked Democratic emails.

When the House had asked Stone in September 2017 if he had discussed WikiLeaks, its founder Julian Assange or the Democratic hack with the Trump campaign, Stone had denied it under oath , saying his legal team "found nothing" of those types of communications.

Prosecutors argued that witness testimony, along with Stone's texts, emails and phone records, showed Stone's interest in reaching WikiLeaks about the hacked documents it had and speaking to the Trump campaign and even Trump himself about it. Prosecutors said Stone had lied to Congress out of a desire to protect Trump.

"It would look really bad for his longtime associate Donald Trump" if the truth had come out, prosecutor Jonathan Kravis had said in his closing argument on Wednesday.

Stone's defense team countered that Stone didn't have a motive to protect Trump when he testified to the House in 2017, because Trump already had won the election and become President.

Witnesses in the trial included a cast of Trump-world characters like former White House strategist Steve Bannon and former Trump campaign deputy chairman Rick Gates, a key cooperator in Mueller's investigation. Both emphasized the campaign's interest in hacks and leaks dating back to April 2016.

During the trial, prosecutors revealed several phone calls between Trump and Stone, including a July 2016 conversation in which, Gates testified, Trump and Stone spoke about the planned release of hacked Democratic emails.

In his written answers to Mueller, Trump said he didn't recall his conversations with Stone, nor discussions about WikiLeaks and the Democratic hack.

Prosecutors argued that Stone's alleged failure to tell Congress about the attempts to reach WikiLeaks left the House Intelligence Committee with a blind spot in its investigation -- causing the committee's final report on Russian interference in the election to be inaccurate.

Stone had told the House that he had an intermediary, whom he later identified as Credico, trying to reach Assange during the campaign. But prosecutors alleged another man had sought to get to Assange on behalf of Stone and the campaign, making Stone's claims about Credico false.

When Credico was called before Congress following Stone's testimony, Stone sent him emails and texts directing him to lie or to refrain from sharing the truth. Credico warned him that Stone may have perjured himself already, but Stone persisted, quoting over and over again lines from the film "The Godfather: Part II," referring to a character who is pressured by the Mafia family to lie to Congress.

The trial got off a chaotic start on November 5 -- Stone missed some of the jury selection because he felt ill -- and brought out a memorable cast of characters both as witnesses and in the audience of the courtroom. At times, the proceedings drew laughs from the courtroom, with Credico even offering to do celebrity impressions in the witness box. But as the trial went on, the mood became more somber. By Friday morning, the second day of jury deliberations, Stone carried a Bible with him into the courthouse.

Stone's wife, Nydia Bertran Stone, was by his side throughout the trial, along with a cadre of supporters, including some who have identified themselves as part of the Proud Boys, a far-right group, and a man dressed in floor-length black-and-white robes who Stone described as his "spiritual adviser" and who led Stone's wife and others in prayer.

Prosecutors hit a stirring, philosophical note just before sending the case to the jury, making a broad appeal for the truth in the final words of their closing argument. Prosecutor Michael Marando had latched onto a phrase used in the defense's closing argument, "So what?"

"So what? ... Well, if that's the state of affairs that we're in, I'm pretty shocked. Truth matters. Truth still matters, OK?" Marando said to the jury.

"I know we live in a world nowadays with Twitter, tweets, social media, where you can find any view, any political view you want. ... However, in our institutions of self-governance, courts of law or committee hearings, where people under oath have to testify, truth still matters," he added, before asking for the jury to find Stone guilty.

The jury of nine women and three men, including a former congressional candidate and a federal government lawyer, deliberated over two days. During their almost nine hours discussing Stone's charges, the jury asked the judge questions that indicated a close reading of prosecutors' wording of the charges. At 11:11 a.m. Friday, the jury wrote to the judge: "WE HAVE REACHED A VERDICT."

Stone had been arrested last January in a predawn raid at his home in Florida by armed federal agents, caught exclusively on camera by CNN. That kicked off weeks of Stone's attempts to draw support, especially on social media. But he crossed a line by posting on Instagram a photo of the judge with crosshairs behind her head -- and Jackson then limited his ability to speak publicly about the case.

Jackson oversaw the weeklong trial in Washington's federal district court, cementing her status as one of the most significant arbiters over Mueller's work. She previously sentenced Trump campaign chairman Paul Manafort to a years-long prison term following his guilty plea in the Mueller investigation, and is set to sentence Gates on December 17.

Gates' testimony in Stone's trial was an especially telling reminder of Mueller's finding that the Trump campaign had welcomed the release of hacked documents that could help them in the 2016 election.

"After Mr. Trump got off the phone with Mr. Stone, what did Mr. Trump say?" prosecutor Aaron Zelinsky asked Gates on Tuesday. "He indicated more information would be coming," Gates responded.

The call happened days after WikiLeaks' first release on July 22, 2016, of emails the Russian military had allegedly hacked from the Democratic National Committee.

Gates said WikiLeaks' announcement that it had pending information on then-presidential candidate Clinton was a "gift."

"It was in a way a gift that we had not sought," said Gates. "There were a number of us who felt it would give our campaign a leg up."

Bannon, another high-profile witness, testified that he and the Trump campaign viewed Stone as an "access point" to WikiLeaks.

Credico spent the longest time in the witness box during the trial.

He wasn't in court to hear the verdict but told CNN afterward that he was "stunned," "shell-shocked" and "not rejoicing."

"The whole thing is depressing. It started out as a fender bender that turned into a 21-car, tractor-trailer pileup," Credico said.

"It's a sad, man-made tragedy that could have been avoided."