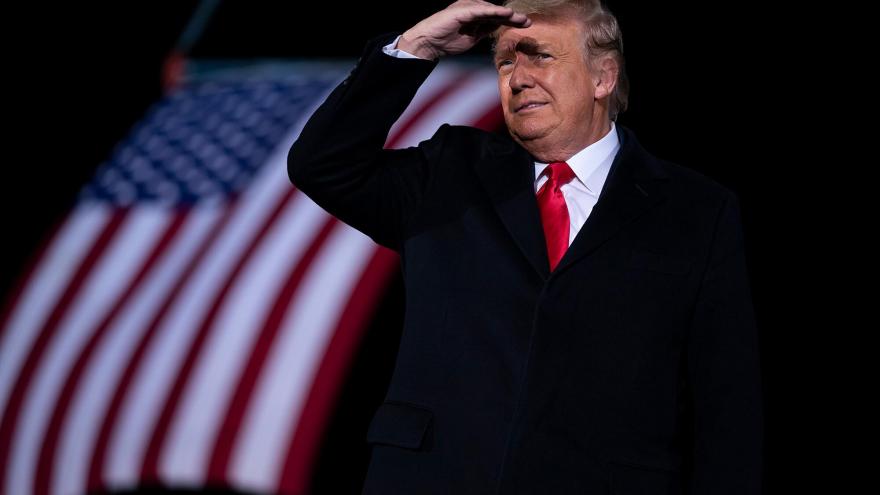 Some of those conversations have happened in recent weeks, one of the sources says. It is unclear if it has come up since Wednesday's mayhem at the Capitol building fomented by the President's rhetoric or after his recent controversial call with the Georgia Secretary of State Brad Raffensperger. Trump has asked about the legal and political consequences of a self-pardon, according to a source close to Trump.

The New York Times reported earlier Thursday that Trump has suggested in conversations since Election Day that he wants to pardon himself, citing two people familiar with the discussions.

He has also asked for legal opinions on whether he has the authority to issue a self-pardon and has been advised on the potential political fallout. This person said it was not yet clear whether the President would follow through with a pardon for himself.

Another person said it is not in the works in the White House counsel's office currently but that doesn't mean it won't happen or that the Department of Justice Office of Legal Counsel is not currently reviewing the matter.

CNN has previously reported Trump has been asking aides since 2017 about his self-pardon power and has been "obsessed" with the idea. Recently, Trump allies such as Sean Hannity on Fox News have suggested publicly that he should do it. Trump has also tweeted that he believes he has the power to do so.

"As has been stated by numerous legal scholars, I have the absolute right to PARDON myself, but why would I do that when I have done nothing wrong?" the President said in 2018.

Still, a presidential self-pardon is untested and experts are divided on its constitutionality. A Justice Department legal memo says the president cannot pardon himself but he can step down and ask his vice president to take over and pardon him. However, that memo is not binding.

"A prosecutor first would have to indict Trump, notwithstanding the self-pardon. Then the issue would be litigated in the courts, likely up to the Supreme Court. Given the weight of the constitutional and historical authority (including the Justice Department opinion and the stated intent of the Framers), a self-pardon likely would not stand; but there's almost no downside to Trump in at least giving it a shot and seeing if it sticks," Honig wrote in July.

"A meager shield is better than no shield at all," he said.

Trump has largely used his broad clemency powers on criminals who are loyalists, well-connected or adjacent to his family. He's also largely ignored the established government process to review and recommend clemency requests, instead relying on the word of friends, donors and Fox News hosts.

While all presidents issue controversial pardons at the end of their terms, Trump has moved at a faster pace than his predecessors, demonstrating little inhibition for rewarding his friends and allies using one of the most unrestricted powers of his office.