Trump asked the Pentagon to explore trench on the border, Pentagon advised against it 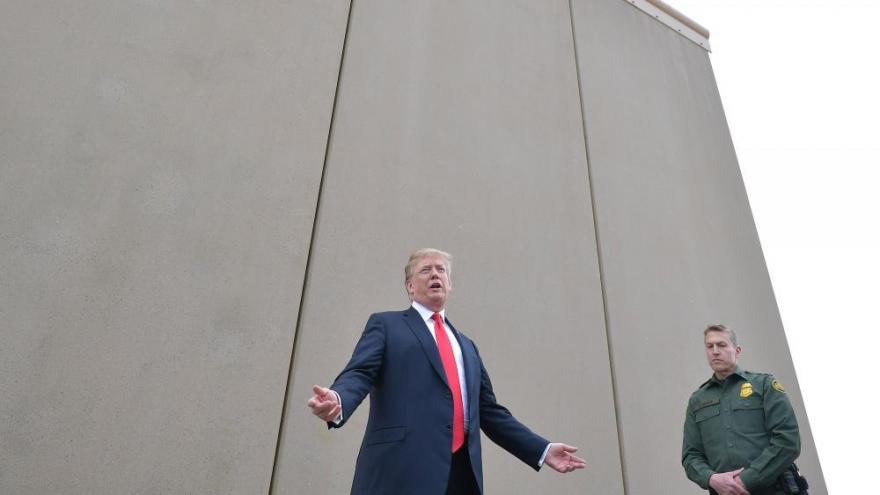 (CNN) -- The Pentagon pushed back against President Donald Trump's request to construct a trench along the US-Mexico border to stop illegal border crossings, according to a letter obtained by CNN.

"USACE determined that construction of an unreinforced 30' x 30' trench, while a deterrent, would take three to five times longer and cost approximately 20 percent more to emplace than other available options," Mark Esper wrote to Trump, referring to the US Army Corps of Engineers. Esper at the time was serving as the Secretary of the Army.

The memo was signed June 26, 2018, and sent to the President, according to a defense official.

Trump made the border wall the cornerstone of his 2016 presidential campaign, pledging to construct additional barriers along the southern border. The request mentioned in Esper's letter appears to have been one of many ideas floated by the President amid frustrations over an influx of migrants at the southern border. Trump previously raised wanting to paint the wall black and include French-style doors, according to The Washington Post and confirmed by CNN.

The New York Times also previously reported that Trump considered a "water-filled trench, stocked with snakes or alligators, prompting aides to seek a cost estimate." Trump denied the report on Twitter, saying "I may be tough on Border Security, but not that tough. The press has gone Crazy. Fake News!"

Esper's letter to the President doesn't make mention of snakes or alligators, but it reveals how the Pentagon advised against the President's request to fortify the border with a trench.

"Only about 100 miles of the total border has geological conditions favorable to excavating an unreinforced 30' x 30' trench," Esper, who Trump later tapped to be his Secretary of Defense, wrote. "While addressing these challenges can be overcome in one way of another, the overall cost of constructing the trench -- even with the most modern of machinery -- is extremely expensive, and the time it would take to complete it would likely take much longer than other options the USACE developed."

In lieu of a trench running along the entirety of the US-Mexico border, Esper said that the two recommended options were a "modular bollard wall" option, made of steel, and a "modified Alaska Wall," the latter being a version of the kinds of walls used to secure US military outposts and bases in conflict zones overseas.

The letter says that Customs and Border Protection preferred the bollard wall option due to the Alaska Wall's use of a concrete base, which Esper said CBP said could be used to offer cover and concealment to people seeking to circumvent the barrier.

"As part of our support, USACE researched a variety of deterrent options, which included the construction of a trench as part of the barrier system along the southern border," Raini Brunson, a spokesperson for the US Army Corps of Engineers, said in a statement provided to CNN.

"After we performed a feasibility analysis, USACE did not execute trench construction as part of the final barrier system due to it being both cost-prohibitive and causing significant schedule delays," Brunson added.

CNN reached out to the White House and Customs and Border Protection for comment.

During his time in office, Trump has touted the wall -- around 78 miles of which have been swapped for new barrier -- and declared a national emergency to shore up additional funds for construction. But construction for new wall, meaning barriers where none existed before, has only recently begun.

White House senior adviser Jared Kushner and other administration aides proposed launching 24-hour web cameras at the southern border to livestream wall construction, The Washington Post reported on Tuesday. One US official acknowledged when the idea for the webcam was first raised, some thought it was a "joke" and referred to it as "panda cam," a reference to the Washington National Zoo's popular real-time video feed of pandas.

Acting Customs and Border Protection Commissioner Mark Morgan said Thursday that construction is underway in the Rio Grande Valley where new barriers will be erected. "We just started breaking ground in RGV, where we're building miles of new wall where there has been no structure there at all," he said.

The administration has said it plans to complete 450 miles of new wall by the end of 2020.

Some of the funding for the wall has been drawn from other Pentagon accounts, a move that has drawn opposition from lawmakers but which was backed by Esper.