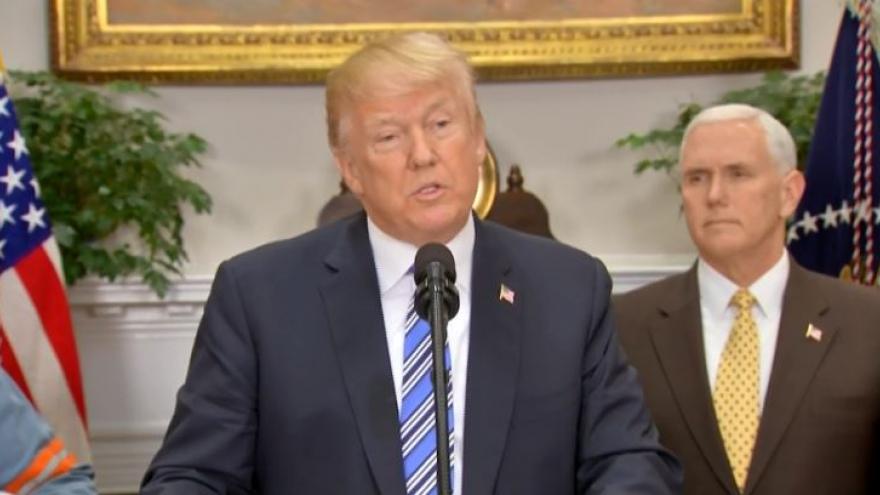 WASHINGTON (AP) — The Latest on President Donald Trump's plan to impose tariffs on imports of steel and aluminum (all times local):

President Donald Trump is announcing steep tariffs on imports of steel and aluminum to address what he says is an "assault on our country."

Trump says a 25 percent tax will apply to steel imports, and 10 percent will be added to aluminum brought into the U.S.

Trump says the excess of imported steel and aluminum is a "travesty" and hurts American workers and industry.

In making the long-awaited announcement Thursday, Trump says the U.S. industry has been "ravaged by aggressive foreign trade practices."

Says Trump, "It's really an assault on our country."

Sources outside the White House say President Donald Trump's tariffs on steel and aluminum imports will take effect in 15 days, with Canada and Mexico indefinitely excluded from the duties.

Trump is ordering import tariffs of 25 percent on steel and 10 percent on aluminum later Thursday. He says American manufacturers need to be protected on national security grounds.

The people briefed on the plans say all countries affected by the tariffs are being invited to negotiate for exemptions, if they can address the threat their exports pose to the U.S.

Those briefed on the plans say the exclusion for Canada and Mexico could be ended, if talks stall to renegotiate the North American Free Trade Agreement.

The people were not authorized to discuss details in advance and spoke on condition of anonymity.

The president suggested earlier Thursday he would provide temporary exemptions for Canada and Mexico as he aims to revise the North American Free Trade Agreement.

Trump also suggested Australia and "other countries" might be spared.

The announcement comes amid a last-minute lobbying effort to blunt the impact of tariffs.

Trump has said the U.S. will be "very fair" but "very flexible" and "protect the American worker."

President Donald Trump is suggesting that Australia and "other countries" may be exempted from steel and aluminum tariffs, along with Mexico and Canada.

Trump says he's sticking with his initial plan for import tariffs of 25 percent on steel and 10 percent on aluminum. But the president says, "We're going to be very flexible."

His comments in a Cabinet meeting Thursday come hours before a 3:30 p.m. meeting to formalize the tariffs amid uncertainty in the West Wing over which countries will be exempted from the protectionist measure.

Trump is expected to delay the imposition of tariffs on Canada and Mexico to turn up the pressure in negotiations over the North American Free Trade Agreement.

Trump tweeted Thursday: "Looking forward to 3:30 P.M. meeting today at the White House. We have to protect & build our Steel and Aluminum Industries while at the same time showing great flexibility and cooperation toward those that are real friends and treat us fairly on both trade and the military."

The president did not say whether he will sign tariffs on steel and aluminum imports at the meeting. The White House has not yet clarified the tweet.

The White House said Wednesday that Mexico, Canada and other countries may be spared from tariffs under national security "carve-outs."

The White House says Mexico, Canada and other countries may be spared from President Donald Trump's planned steel and aluminum tariffs under national security "carve-outs," a move that could soften the blow amid threats of retaliation by trading partners and dire economic warnings from lawmakers and business groups.

Press secretary Sarah Huckabee Sanders told reporters the exemptions would be made on a "case by case" and "country by country" basis, a reversal from the policy articulated by the White House just days ago that there would be no exemptions from Trump's plan.

The update came as congressional Republicans and business groups braced for the impact of expected tariffs of 25 percent on imported steel and 10 percent on aluminum, appearing resigned to additional protectionist trade actions as Trump signaled upcoming economic battles with China.