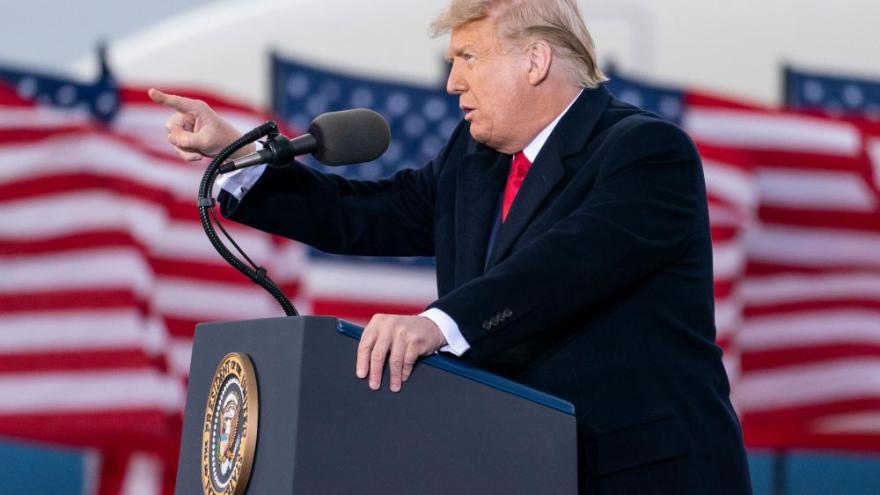 (CNN) -- President Donald Trump announced Monday that he intends to lift Sudan's state sponsor of terrorism designation -- news that comes as the transitional government in Khartoum could deliver him a diplomatic victory ahead of the US presidential election.

Trump said on Twitter that once the $335 million that Sudan has agreed to pay as part of a settlement for victims of twin bombings against the US Embassies in Tanzania and Kenya in 1998, he will lift the designation.

"GREAT news! New government of Sudan, which is making great progress, agreed to pay $335 MILLION to U.S. terror victims and families. Once deposited, I will lift Sudan from the State Sponsors of Terrorism list. At long last, JUSTICE for the American people and BIG step for Sudan!" he tweeted.

Trump's announcement comes months after the US and Sudan reached a bilateral settlement agreement. The tweet was welcome news for Sudanese officials as well as some of the American survivors and families of the victims of those bombings, who have urged Congress to pass legislation so that it can be disbursed. However, others remain opposed to the settlement, which pays lesser amounts to foreign nationals who worked at the embassy and employees who became US citizens after the attack.

Behind the scenes, the Trump administration has been pushing for the transitional government in Sudan, led by Prime Minister Abdalla Hamdok, to normalize relations with Israel. Such a move would present a foreign policy win to Trump just weeks ahead of the election.

The President's son-in-law, Jared Kushner, and a team of international negotiators from the White House and State Department had taken the lead on brokering these deals between Israel and a number of countries, including Sudan, Oman and Morocco, according to people familiar with the discussions, and their efforts have thus far yielded two successful deals -- with Bahrain and the United Arab Emirates.

During a visit to Khartoum in late August, Secretary of State Mike Pompeo and Hamdok discussed the rescission of the terrorism designation, but Hamdok appeared to rebuff the potential of normalizing relations with Israel, saying the transitional government did not have the authority to pursue such a change.

Senior government sources in Sudan told CNN that the designation change was a requirement by Hamdok before talks on normalization could proceed.

"Prime Minister Hamdok was insistent during negotiations with the US that the removal from the list not be linked to normalization as Sudan has met all the criteria for its removal. Now that the designation has been changed discussions can begin afresh on normalization. The designation change was our priority and normalization is theirs," one source said.

Sudan has been listed as a state sponsor of terrorism since 1993, and it is one of only four nations total designated as such. Iran, North Korea and Syria are also listed. As a result, Sudan faces a series of restrictions including a ban on defense exports and sales and restrictions on US foreign assistance.

Sudan's strongman leader, Omar al-Bashir, was ousted in a military coup in April 2019 after three decades in power.

'A critical step in advancing the US-Sudan relationship'

With the nation under a transitional government, Pompeo has voiced support for delisting Sudan with certain prerequisites.

"This is an opportunity that doesn't come along often. We all know the history of Sudan and the tragedy there," Pompeo said at a Senate Foreign Relations Committee hearing in late July. "There's a chance not only for a democracy to begun to be built out, but perhaps regional opportunities that could flow from that as well. I think lifting the state sponsor of terrorism designation there, if we can take care of the victims of those tragedies, would be a good thing for American foreign policy."

More than 200 people were killed and thousands were injured in 1998 when twin al Qaeda bombings rocked the US Embassies in Nairobi, Kenya, and Dar es Salaam, Tanzania. Sudan, under the leadership of al-Bashir, sheltered Osama bin Laden and was found to have assisted the al Qaeda operatives. The US and Sudan reached a settlement in which the latter would pay $335 million to compensate survivors who worked at the embassies and victims' families. The money will be deposited in an escrow account. Sudanese government spokesman Faisal Mohammed Salih told CNN that "the required compensation amount has been deposited in a neutral account."

The State Department declined to comment on Trump's announcement Monday, although the top US diplomat in Khartoum congratulated the Sudanese government and its people on the news.

"This will be a critical step in advancing the U.S.-Sudan relationship and we hope will open the way for new engagement by the international community," charge d'affaires Brian Shukan wrote Monday on Twitter.

Hamdok said in a tweet Monday, "We very much look forward to your official notification to Congress rescinding the designation of Sudan as a state-sponsor of terrorism, which has cost Sudan too much."

"This Tweet and that notification are the strongest support to Sudan's transition to democracy and to the Sudanese people," he said. "As we're about to get rid of the heaviest legacy of Sudan's previous, defunct regime, I should reiterate that we are peace-loving people and have never supported terrorism."

The role of Congress

Three congressional aides told CNN that the administration had yet to notify Congress of the delisting. The notification triggers a 45-day period in which Congress could override the decision, but it would require both the House and Senate to pass a veto-proof joint resolution of disapproval.

Edith Bartley, spokesperson for some the families of Americans who were killed in the embassy bombings, said in a statement Monday that they welcomed the announcement.

"On behalf of the families killed in the 1998 bombing of the Nairobi embassy, I wish to express our appreciation for the long hard work of the State Department, and the new civilian regime in Sudan, to secure Sudan's payment of compensation to our diplomatic families for that act of terror," said Bartley, who herself lost her father and brother in the attack in Nairobi.

"The escrow fund established by that agreement, once it is released to the victims, will fulfill a longstanding commitment first made by President Bush, honored by President Obama, and now affirmed by President Trump, to condition normalization on compensating survivors and the families of those who were lost to acts of terror. In so doing, we vindicate the sacrifice of our diplomats abroad," she said.

In her statement, Bartley also called for Congress "to immediately pass the legislation that is needed to implement the agreement, and begin the payment process. Congress cannot let this agreement fall victim to legislative gridlock and bickering."

Sen. Chris Coons, a Delaware Democrat who has been spearheading efforts on the matter, said Monday that the "Trump administration and Congress must redouble efforts to pass legal peace legislation for Sudan to deliver long-awaited justice and compensation to terror victims and families."

Stuart Newberger, an attorney at Crowell & Moring who represents US victims and their families, told CNN that Congress must pass the legislation because the agreement between Washington and Khartoum "requires that Sudan be basically relieved of being sued in federal court as a sponsor of terror under the Foreign Sovereign Immunities Act."

"So that's why Congress has to get involved to provide Sudan what's called 'legal peace.' The President can't do that on his own; that's something only Congress can do," he said.

The settlement faces opposition from those who see it as unfair and inequitable -- it would give different payouts to those embassy employees who were US citizens at the time of the attacks, those who have since become US citizens, and those who are still foreign nationals. Some 9/11 victims' families are also opposed to the immunity that Sudan would receive under the deal, which they fear could jeopardize their own claims against the nation.

Doreen Oport, who worked at the embassy in Nairobi and was injured in the attack, said in a statement Monday, "We want a resolution but cannot accept one that betrays so many US embassy victims and the most basic principles of American justice."