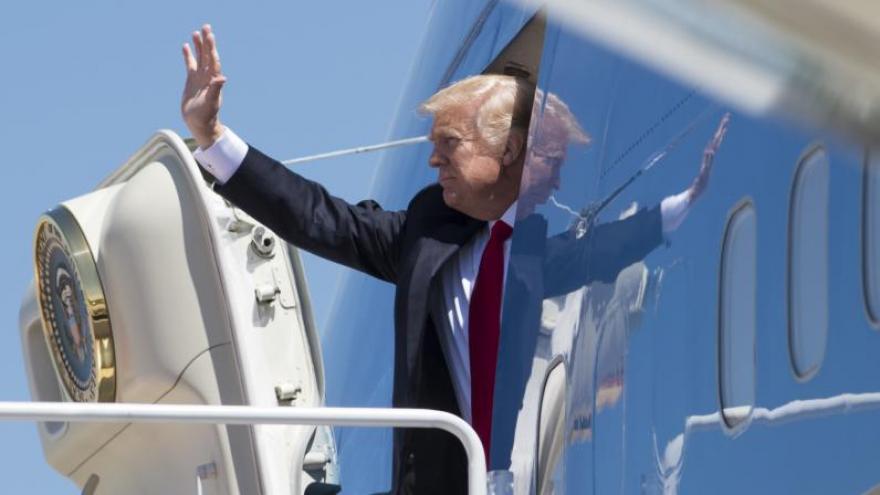 (CNN) -- President Donald Trump's reelection campaign announced Tuesday that he will hold an event with supporters in Milwaukee the same day Democrats Vermont Sen. Bernie Sanders and former Vice President Joe Biden announced they were canceling events in Ohio out of concern for public health amid the coronavirus outbreak.

One day later, after an Oval Office address by Trump outlined actions Americans should take to prevent the spread of the virus, the campaign postponed the event.

"Out of an abundance of caution because of the coronavirus outbreak, the President's campaign is postponing the 'Catholics for Trump' event scheduled for March 19th in Milwaukee. It will be rescheduled," campaign communications director Tim Murtaugh tweeted Wednesday night.

Trump had privately insisted that there be no changes to his schedule, despite warnings from health officials about large gatherings as the virus has spread throughout the United States. He said Tuesday that the public should "stay calm" because the coronavirus will "go away," though officials on the Sanders and Biden campaigns said they were acting on advice from public officials who were worried about convening big crowds during the outbreak.

As health experts have raised concerns about the spread of coronavirus for weeks, Trump and his Democratic rivals had continued to hold sizable events on the campaign trail. Members of Trump's own coronavirus task force have been reluctant to say whether politicians should move forward with these kind of events -- and risk putting themselves and their supporters at risk.

On Monday night, Dr. Anthony Fauci, director of the National Institute of Allergy and Infectious Diseases, said he couldn't comment on campaign rallies.

"It really depends. We are having, as we've all said, this is something in motion. This is an evolving thing," Fauci said.

Health and Human Services Secretary Alex Azar was pressed by CNN's John Berman on whether he would advise his own parents to go to a large gathering such as a campaign rally.

"I would encourage any individual who is elderly or is medically fragile to think long and hard about going to any large gathering that would involve close quarters and potential spread. And if they do go, to take appropriate personal hygiene protections," he said during an appearance on "New Day." He urged Americans to "wash your hands with soap and water" and "keep as much distance you can from others."

In an op-ed in The Washington Post, Trump's former homeland security adviser Tom Bossert is one of several officials who have discouraged large gatherings, to help mitigate the spread of the virus.

"School closures, isolation of the sick, home quarantines of those who have come into contact with the sick, social distancing, telework and large-gathering cancellations must be implemented before the spread of the disease in any community reaches 1 percent," Bossert wrote.

Some people around Trump, including his former acting chief of staff Mick Mulvaney, have fed his belief that the media is exaggerating reports about the coronavirus in order to damage him politically.

"If you can't beat Trump and if you want to stop the appearance of excitement about the Trump campaign, then stop the rallies," Limbaugh said.

A source familiar with the Trump campaign's plans said they were "proceeding as normal until told not to" and suggested they would see how Democrats responded.

"They will not want to take the lead on canceling campaign events, and will only do so if and when the Sanders and Biden campaigns cancel events," the person said.

Sanders and Biden have faced similar scrutiny over decisions to hold large events as the number of coronavirus cases in the US has skyrocketed.

While insisting it was taking extra precautions, the Sanders campaign had scheduled the Cleveland rally anyway and said it would consult with health officials while planning such events "because the last thing in the world we will ever want to do is put anybody in danger."

The Sanders campaign then canceled his event just hours before he was scheduled to appear Tuesday night. Minutes later, the Biden campaign did the same.

"Sen. Sanders would like to express his regret to the thousands of Ohioans who had planned to attend the event tonight. All future Bernie 2020 events will be evaluated on a case by case basis," communications director Mike Casca said.

Biden's campaign team said they were trying to make alternative arrangements so the candidate could speak on election night.

"Vice President Biden thanks all of his supporters who wanted to be with us in Cleveland this evening. Additional details on where the Vice President will address the press tonight are forthcoming," his communications director, Kate Bedingfield, said.